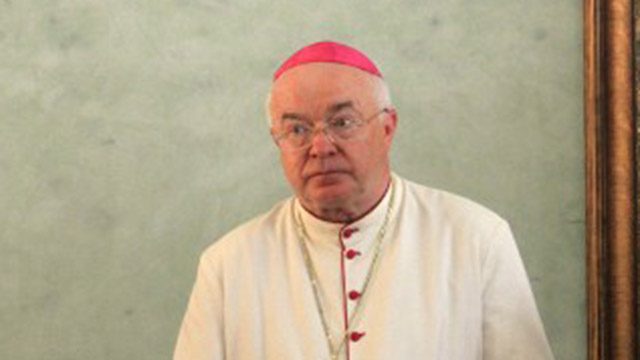 Facebook Twitter Copy URL
Copied
It is now up to the Vatican to prosecute former Polish archbishop Jozef Wesolowski, who is in custody after being defrocked in June for abusing children

“Under the Vienna Convention, the prosecution of diplomats lies within the jurisdiction of the country that issued their accreditation,” the Caribbean island nation’s attorney-general Francisco Dominguez Brito told reporters in Warsaw.

It would therefore be up to the Vatican to prosecute former Polish archbishop Jozef Wesolowski, who is in custody after being defrocked in June for abusing children.

The Vatican is preparing for a landmark trial against the 66-year-old, who was stripped of his job in June after a Church tribunal found he had abused minors during his 2008-13 stint as the Holy See’s ambassador to the Dominican Republic.

Wesolowski, who is being held in custody at the Vatican, is charged with sexually abusing minors and possessing child pornography in what has become one of the Church’s most damaging pedophilia cases.

The Vatican expects to conclude its criminal investigation early next year, clearing the way for the first sex abuse trial to take place within its walls.

If convicted, Wesolowski faces up to seven years in prison — longer if there are aggravating circumstances.

Poland’s Attorney General Andrzej Szeremet said Monday that he asked Brito whether Polish prosecutors could gather their own evidence in the Dominican Republic regarding Wesolowski, who is a Polish citizen.

“The Vatican’s prosecution of the case does not rule out Poland also conducting its own investigation,” Szeremet said at the joint press conference.

The Vatican rebuffed extradition moves by Poland, although officials at the Holy See have said that could happen after the planned trial.

Polish prosecutors began independent investigations last year into the allegations against Wesolowski, as well as another Polish cleric who served in the Dominican Republic at the same time.

In February, Polish prosecutors charged the second priest — a 37-year-old identified only as Wojciech G, for legal reasons — with sex offenses against children in both the Dominican Republic and Poland.

He denied any wrongdoing and faces up to 12 years behind bars if convicted.

The United Nations fiercely condemned the Catholic Church in January for failing to stamp out child abuse and allowing systematic cover-ups by moving clergy suspected of molesting children to other posts.

Pope Francis has vowed to crack down on the abuse, reiterating the zero-tolerance approach of his predecessor. – Rappler.com