Hong Kong Occupy protest leaders turn themselves in to police 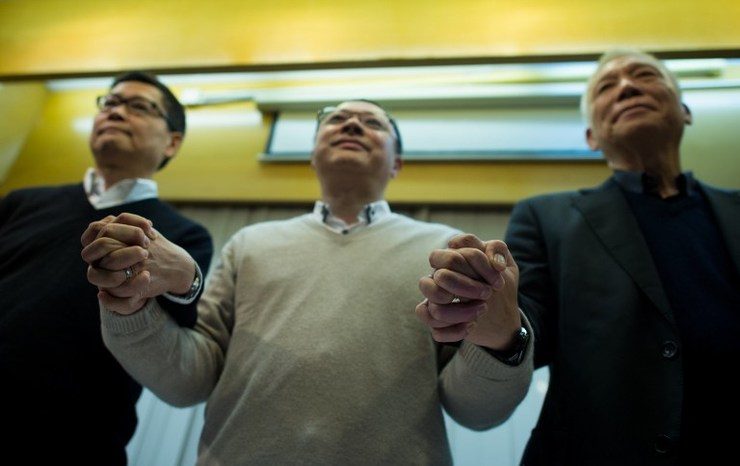 HONG KONG – (2ND UPDATE) The founders of Hong Kong’s pro-democracy Occupy movement surrendered to police Wednesday, December 3, in a symbolic move, as they try to take the protests off the streets after more than two months of rallies punctuated by violence.

Dozens of supporters, carrying yellow umbrellas which have become a symbol of the movement and shouting “I want true democracy without fear!” surrounded the trio as they turned themselves in at a central police station.

However, Benny Tai, Chan Kin-man and Chu Yiu-ming quickly emerged from the station, saying they had not been arrested despite admitting “participating in unauthorized assembly.”

“We have not been arrested so we are allowed to leave with no restriction on our liberty,” said Tai.

He told Agence France-Presse (AFP) there were “political considerations” behind their swift release to avoid crowds flocking to the protest zones, but said it was inevitable they would eventually be arrested.

“I don’t think the matter will be resolved on this occasion, later we may be arrested, even prosecuted for more serious offences,” Tai added.

The three had been joined by 82-year-old Cardinal Joseph Zen, a prominent pro-democracy supporter, who also gave himself up.

About 40 other supporters waiting outside the police station also queued up to fill out forms turning themselves in.

“This is for the fortune of the next generation,” said secondary school teacher April Fan, 55.

Police said Wednesday afternoon that 24 people had so far surrendered.

“They were explicitly told by the interviewing officers that illegal occupation of public places was an unlawful act and they should stop such act immediately,” a statement said.

“Police will conduct follow-up investigations based on the information provided.”

While there was no warrant for the founders’ arrest, Hong Kong and Chinese authorities have consistently slammed the protests as illegal.

The founders’ “surrender” and their call to end the road blockades followed violent clashes between protesters and police outside the government headquarters late Sunday which left dozens injured.

Tai said the Occupy movement would now take a different approach to promoting democracy, including through education and a new social charter.

Protesters began blocking three major intersections in late September to demand free leadership elections in the semi-autonomous Chinese city. One has since been cleared by police.

Activists say they cannot leave until their demands have been met.

China’s communist authorities insist that candidates for the 2017 leadership vote must be vetted by a loyalist committee, which demonstrators say will ensure the election of a pro-Beijing stooge.

China refuses to budge despite the student-led protests and Hong Kong’s current leader Leung Chun-ying has also taken a tougher line in public since Sunday’s violence.

On Wednesday he rejected a student request for a meeting to discuss the possible relaunch of the political reform process.

“There is no room legally to relaunch political reform,” Leung’s office said in a statement.

“Any illegal or confrontational action to express views on political reform will be in vain.”

Public support for the protesters has waned in recent weeks.

Anti-Occupy demonstrators outside the police station swore and held up placards of the three Occupy founders in striped jail uniforms.

“Support the government to enforce the law!” they shouted, and “Eat shit!”

Analyst Sonny Lo said the Occupy trio were handing themselves in to “reignite” the movement by regaining the moral high ground.

Despite the Occupy call to retreat, student protesters on hunger strike vowed they would continue “suffering pain for justice”.

“We believe we are doing better by suffering pain for justice than you are by having big meals,” they said in the letter, renewing calls for dialogue on political reform. – Rappler.com