Protests after no charges in NYC police death of black man 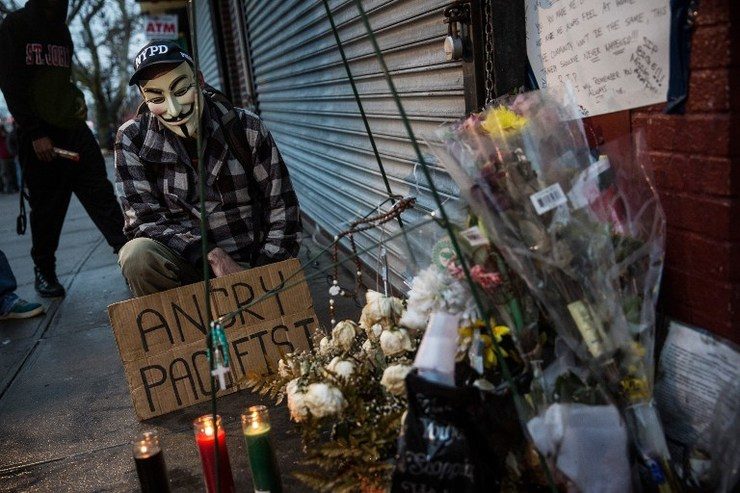 Facebook Twitter Copy URL
Copied
(UPDATE) Eric Garner's death is one of a string of high-profile, racially-charged incidents in which white officers have been accused of using unreasonable force or being too quick to fire at black suspects

NEW YORK, USA (UPDATED) – Demonstrations broke out in New York City after a grand jury declined Wednesday, December 3, to charge a white police officer in the choking death of a black man, days after a similar decision sparked unrest in US cities.

Soon after the decision by the grand jury, hundreds of protesters massed in New York City’s iconic Times Square chanting “No justice, no peace,” the signature call of demonstrators already angered by a jury decision last week not to indict a white policeman in the fatal shooting of unarmed black teenager Michael Brown in Missouri.

Both cases, coupled with the death of a 12-year-old boy who was gunned down by police officers in Ohio while handling a toy pistol, have reignited a longstanding debate in the United States about relations between law enforcement and African Americans.

Following Wednesday’s grand jury decision, Attorney General Eric Holder said the US Justice Department will launch a federal civil rights investigation into the case of Eric Garner, who died after being placed in a chokehold by New York police Officer Daniel Pantaleo while being arrested on suspicion of selling untaxed cigarettes on Staten Island, a NYC borough.

That did not deter protesters in Times Square, who waved signs with messages such as “Black lives matter,” and “Respect human lives.” Several people were arrested in protests near the Rockefeller Center by police who were out in force.

There was another protest in the great hall of Grand Central Station, where about 50 protesters lay, pretending to be dead, and on Staten Island.

There were small peaceful protests in Washington, DC.

Garner’s death is one of a string of high-profile, racially charged incidents in which white officers have been accused of using unreasonable force or being too quick to fire at black suspects.

“We’re seeing too many instances where people do not have confidence that folks are being treated fairly,” Obama said.

“In some cases, those may be misperceptions, but in some cases that’s a reality, and it is incumbent upon all of us as Americans… that we recognize this is an American problem and not just a black problem or a brown problem.”

The August shooting death of 18-year-old Brown by a white officer in Ferguson, Missouri sparked consecutive nights of violence and has become a rallying cry for African-American communities across the country fed up with what they say is racially biased policing.

A grand jury in that case also decided not to charge the officer involved.

“Today’s outcome is one that many in our city did not want,” said New York Mayor Bill de Blasio, who was quick to call for calm.

“New York City owns a proud and powerful tradition of expressing ourselves through non-violent protest. We trust that those unhappy with today’s grand jury decision will make their views known in the same peaceful, constructive way.”

In recent days protesters have demonstrated – largely peacefully – in New York to decry what they say is the over-reliance of aggressive tactics by police.

But “if they engage in criminal activity, such as vandalism –- actual crime -– they will be arrested,” he warned.

A New York City medical examiner had ruled Garner’s death a homicide caused in part by the chokehold used during the arrest.

De Blasio has said authorities need to address the “underlying reality” highlighted by the deaths of Brown and Garner.

De Blasio, who is white, has a mixed-race son and said he is well aware of the difficulties young black people can face.

“We’ve had to literally train him, as families have all over this city for decades, in how to take special care in any encounter he has with the police,” the mayor said.

De Blasio noted that America is “dealing with centuries of racism.”

Benjamin Crump, the attorney for Michael Brown’s family, said the recent incidents were undermining trust in the US justice system.

“Why are police officers always given special treatment and not held accountable, especially in minority communities?” he told CNN.

Meanwhile on Wednesday, New York authorities announced a pilot program to equip about three dozen police officers with body cameras to record their behavior towards the public.

De Blasio hailed the tool as “one of the ways to create a real sense of transparency and accountability.”

Garner’s family in October said they would sue the city and police for $75 million. – Rappler.com