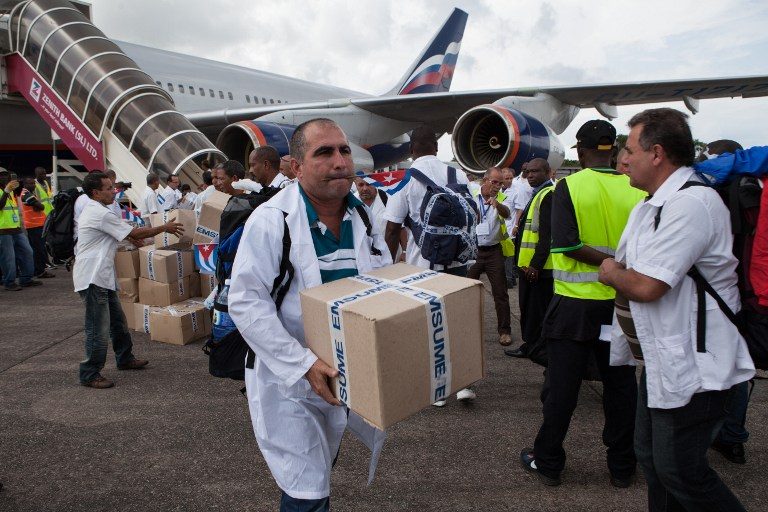 HAVANA, Cuba (UPDATED) – A Cuban doctor infected with Ebola in Sierra Leone returned to Havana on Saturday, December 6, after being cured in a Swiss hospital.

Felix Baez Sarria arrived via Paris on an Air France aircraft and was received by Cuban Health Minister Roberto Morales, before being joined by his wife and son.

Wearing a blue shirt and walking under his own power, Baez appeared to be in good health.

“A big thank you to everyone, I am very happy to be here,” he told the press, expressing gratitude for the doctors who treated him in Sierra Leone and Switzerland.

The 43-year-old, who specializes in internal medicine at a military hospital in Havana, contracted Ebola while deployed as part of a group of 165 Cubans working to fight the deadly hemorrhagic fever in Sierra Leone.

He developed symptoms of the disease on November 16 and was transferred to a Geneva hospital five days later.

The hospital said he recovered after an experimental treatment consisting of two drugs.

Baez was given ZMab, a medication similar to the experimental ZMapp, as well as Favipiravir, a Japanese medication normally used to fight the flu.

Ebola has caused more than 6,100 deaths in less than a year, according to the latest data from the World Health Organization. – Rappler.com