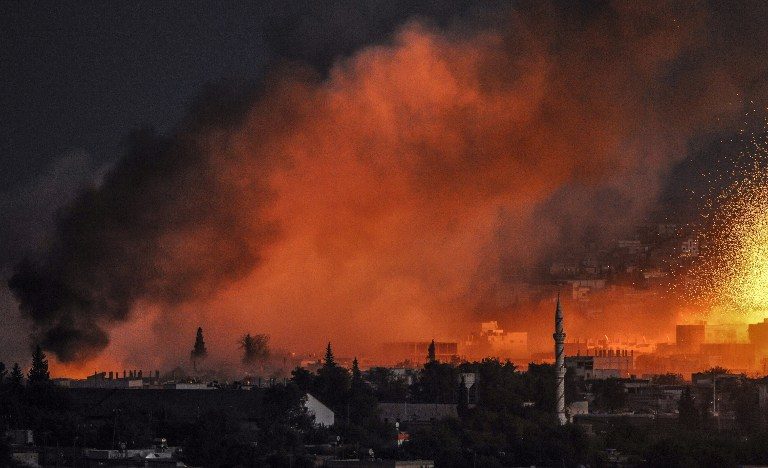 Facebook Twitter Copy URL
Copied
Endemic corruption, poor economic development, the failure of Arab nationalism and frustration over the Palestinian cause all contribute to the rise of Islamism as an alternative for the Middle East

BEIRUT, Lebanon – The meteoric rise of the Islamic State (ISIS) group and its ability to recruit Western jihadists reflect the extent to which religious radicalism has come to dominate global conflict.

After decades of dictatorship interrupted by 3 years of revolt, the Middle East saw fresh upheaval in 2014 as ISIS fighters swept across Syria and Iraq and the Gaza Strip was devastated by its 3rd conflict in 6 years.

Endemic corruption, poor economic development, the failure of Arab nationalism and frustration over the Palestinian cause have all contributed to the rise of Islamism as an alternative for the region, the birthplace of the 3 great monotheistic religions.

According to Raphael Lefevre, visiting scholar at the Carnegie Middle East Center, the turning point came in 2003 when the United States invaded Iraq.

The attack “exacerbated the sectarian fault lines in the region… and facilitated the rise of Iran as an active strategic player in the Arab world”, Lefevre told Agence France-Presse.

“It also gave rise to a sense of Sunni vulnerability among populations across the Levant,” he added.

In Syria, the Alawite-dominated regime was aided by Shiite Iran in its suppression of a revolt by majority Sunnis. In Iraq, the Shiite leadership was accused of discriminating against Sunnis.

“It’s through the lenses of this short history that the rise of (the Islamic State, the Al-Nusra Front) and other Sunni extremist groups can be perceived,” said Lefevre.

The rise of Islamism was also spurred by the failure of Arab nationalism, whose aim was to transcend religion, but which was too intrinsically linked to secular, despotic regimes.

The failure to defeat Israel, as well as a disastrous economic situation, also fanned the religious fervor.

The 1993 Oslo peace accords signed by Israel and the Palestine Liberation Organization “caused a shock because they meant one could no longer fight for the Palestinian cause”, said Nayla Tabbara, who teaches religious studies at Beirut’s Saint Joseph University.

“There was no cause any more, and this explains Islamism’s magnetism,” she added. Islamic radicalism has had a devastating impact on the Christians’ ancient presence in the region, especially after ISIS seized Mosul, Iraq’s second city.

“Christians in Lebanon and in other countries became very scared… This pushed them to escape,” said Tabbara.

Religion has long been a main component of social and political life in the Middle East, and Israelis and Palestinians have also become more radicalized in recent months.

“Political Islam is making a comeback by focusing on the feeling of injustice caused not only by Israel, but also by the whole of the international community,” Tabbara said.

Hamas and Israel fought a 50-day war in July and August which resulted in the deaths of about 2,200 Palestinians and more than 70 Israelis.

There has also been a string of attacks by Palestinians against Israelis, including hit-and-run incidents.

According to Israeli historian Zeev Sternhell, “there has definitely been a radicalizing, hardline trend, but strictly speaking, it has been more nationalistic than religious”.

“Religion is used to serve the hardcore nationalists and massive settlers. Today, (religious) fanatism is more hardline than ever,” he said.

Looking to the divine

A dramatic new trend is the capacity of ISIS to recruit among disaffected youths in the West.

According to a recent study, around 15,000 foreign fighters have joined the group in Syria. About 20% are Westerners.

“These young people feel that our societies no longer have anything to offer them, and the thrill of fighting for a cause makes them believe they have unlimited power, a divine power,” said anthropologist and psychologist Scott Atran.

“It’s glorious and adventurous. The feeling that one can change the world is very attractive,” said Atran, who teaches at the French Public Institute of Research and at Michigan University in the United States.

Tabbara added: “People need to feel their lives have meaning, they need to feel the divine. As that no longer exists in the West, (new recruits) are traveling wherever they can find it.”

She said the fighters “are also looking for a sense of community and brotherhood. That’s what makes young people join these movements.” – Rappler.com