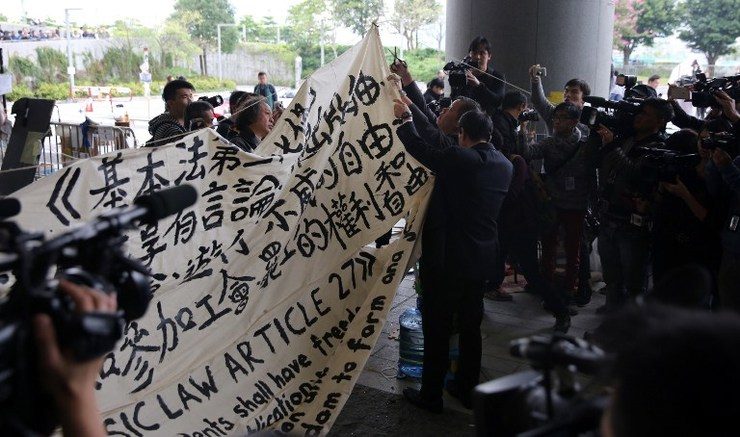 A committed core of around a dozen demonstrators had staged a sit-in at the centre of the last site in the busy shopping district of Causeway Bay as police cut away barricades and tore down banners and shelters.

Seventeen people, from students to the elderly, were arrested without resisting, with some shouting “We will be back” and “Fight to the end”.

Trucks and cleaning teams moved in to remove the debris, and roads around the site which have been closed for weeks reopened.

Activists calling for free leadership elections occupied major traffic arteries after China said in August that candidates for the city’s chief executive elections in 2017 would first be vetted by a loyalist committee.

Campaigners said the move would ensure a pro-Beijing stooge in the leadership role.

He said that the demonstrations had led to “serious losses” in sectors including tourism and retail.

“Other than economic losses, I believe the greatest loss Hong Kong society has suffered is the damage to the rule of law by a small group of people,” he added.

Leung is vilified by protesters who cast him variously as a wolf and a vampire and have repeatedly asked for him to step down.

But Beijing has backed his administration throughout the occupation.

“If we just talk about democracy without talking about the rule of law, it’s not real democracy but a state of no government,” Leung said.

Police chief Andy Tsang defended the behavior of his officers – which has been criticized for being heavy-handed.

“What is necessary will very much depend on the circumstances,” he said when questioned over levels of force.

He described police action as “appropriate” and the ending of occupy as “comparatively peaceful”.

Nevertheless, the force had received almost 2,000 complaints from members of the public over its behavior, he said.

Most of those were related to “neglect of duty” and “unnecessary use of authority”.

More than 900 people were arrested during the occupation with more than 200 protesters and 100 police officers hurt, he added.

Causeway Bay hosted the smallest of the three camps that sprang up in late September, paralyzing sections of the city, as part of the student-led campaign for free leadership elections.

The main Admiralty camp which sprawled across a kilometer of multi-lane highway through the heart of the business district was cleared on Thursday, December 11.

Police cleared the other major protest site in the working-class commercial district of Mongkok – scene of some of the most violent clashes since the campaign began – in late November.

Students who spearheaded the street protests were among the sit-in group in Causeway Bay Monday.

‘Let them arrest me’

They were joined by a 90-year-old campaigner surnamed Wong who sat on who was later led away by police, walking slowly using a cane.

“I will let them arrest me,” he said. “We have to get back what they owe us.”

Protesters camped outside the government complex were also asked to leave by officials Monday afternoon, with most packing up their tents and belongings.

Demonstrators feel their lengthy occupation has put the democracy movement on the map with Beijing and the local administration, after it saw tens of thousands of supporters on the streets at its height.

But it has achieved no political concessions from either Hong Kong’s leaders or the Chinese government, with both branding the protests “illegal”.

However, protesters have vowed to struggle on in their fight for fully free elections through various means including refusal to pay rent and taxes.

The court was adjourned for authorities to decide whether to lay charges, local media said.  – Rappler.com