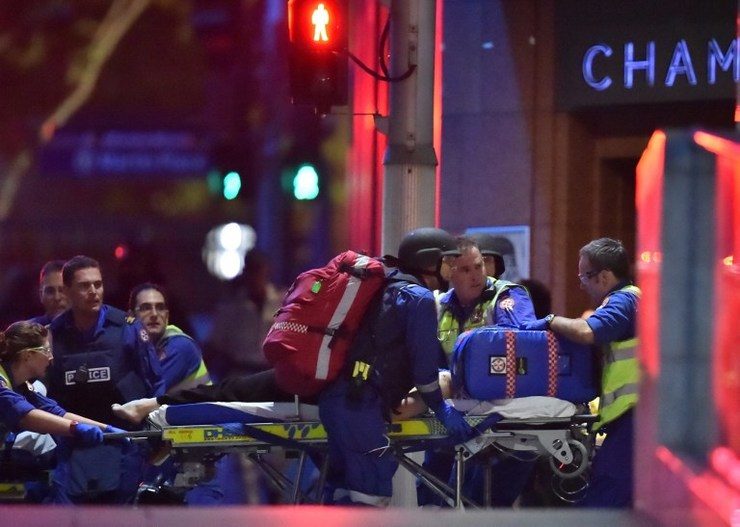 Police in SWAT-style gear hurled percussion grenades and opened fire, unleashing a flurry of loud bangs and flashes in the eatery in the heart of Australia’s biggest city, after a number of the staff and customers managed to flee for their lives.

Police moved in after an exchange of gunfire, with the 50-year-old “lone gunman” shot and killed, New South Wales Police Commissioner Andrew Scipione said at a press conference.

A man, aged 34, and a woman, 38, were also pronounced dead after being taken to hospital.

“It was the act of an individual. This should never destroy or change the way of our life,” Scipione said.

Channel Seven reporter Chris Reason, whose office is opposite the cafe, said a call came from police communications that there was a “hostage down”, prompting officers to storm the building without warning.

An Agence France-Presse photographer saw one body carried out.

Royal North Shore Hospital had admitted a 39-year-old policeman with a gunshot graze to his cheek, a woman in her 40s in a serious but stable condition with a gunshot wound to her leg, and a woman suffering from back pain, a spokeswoman told Agence France-Presse.

A bomb robot was sent into the building as police declared the siege over and medics tended to hostages but no explosives were found.

The hostage ­taker, who earlier had unfurled an Islamic flag, was named by ABC television and other media as an Iranian-born “cleric” called Man Haron Monis.

They published a photo of him sporting a beard and a white turban and said he was on bail for a series of violent offenses.

The pre-­Christmas siege of the Lindt chocolate cafe began Monday morning, December 15, and triggered a massive security lockdown in Sydney’s bustling financial district as hundreds of police surrounded the site. Monis’s former lawyer Manny Conditsis said the public could be assured that the siege was not the work of an organized terrorist group.

“This is a one-off random individual,” he told broadcaster ABC. “It’s not a concerted terrorism event or act. It’s a damaged­ goods individual who’s done something outrageous.”

The Australian newspaper called Monis a “self­-styled sheikh” who had sent offensive letters to the families of dead soldiers and was on bail on charges of being an accessory to the murder of his ex-wife.

It said he arrived in Australia as a refugee in 1996, lived in Sydney’s southwest and was “understood to be a fringe Islamist”.

Police declined to identity the gunman but would not deny reports naming him as Man Haron Monis.

Tehran swiftly condemned the hostage-taking by the Iranian-born gunman.

“Undertaking such inhuman acts and provoking fear and panic in the name of merciful Islam is not in any way justifiable,” foreign ministry spokeswoman Marzieh Afkham said, according to IRNA news agency.

The Australian government said earlier there was no clear motivation. But the Islamic flag appeared to be one commonly used by jihadist groups bearing the shahada, or profession of faith in Arabic script ­­ “There is no God but Allah; Mohammed is his messenger.”

The gunman made a series of demands through Australian media but they were removed after police requested they not be made public.

Australia has been on high alert with the government raising concerns that citizens who have fought alongside Sunni jihadists in Iraq and Syria could return home radicalized and carry out “lone wolf” attacks.

Some six hours into the siege, 3 men emerged from the cafe and ran for their lives. Around an hour later two distraught women employees also fled, and then several more people managed to run out late in the night.

One of the escapees was barista Elly Chen whose sister Nicole said on Facebook: “Yessss I finally see you. I’m so glad you’re safe!!!!” Channel Seven’s Reason tweeted earlier: “We can see gunman is rotating hostages, forcing them to stand against windows, sometimes 2 hours at a time.”

The scene of the drama, Martin Place, is Sydney’s financial centre and houses several prominent buildings, including the New South Wales parliament, the US consulate, the country’s central bank and the Commonwealth Bank of Australia.

Many shops and offices in the area shut early due to the scare, with only a trickle of people walking along usually bustling streets.

At the nearby Sydney Opera House, which police had swept earlier Monday, evening performances were cancelled.

“It’s sad to think this is my home and that it could happen anywhere,” said onlooker Rebecca Courtney.

More than 40 Australian Muslim groups jointly condemned the hostage ­taking and the use of the flag, which they said had been hijacked by “misguided individuals that represent no one but themselves”.

The government in September raised its terror threat level and police conducted large­ scale counter­terror raids across the country. Only two people were charged.

More than 70 Australians are believed to be fighting for Islamic militants in Iraq and Syria. At least 20 have died. – Rappler.com