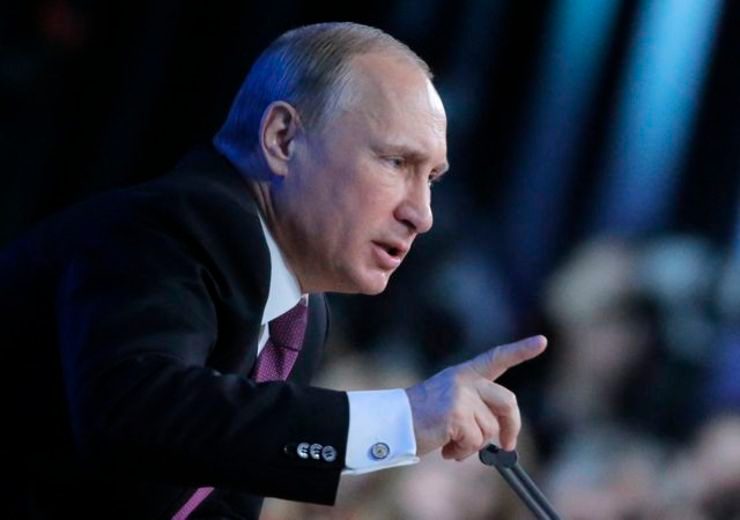 Facebook Twitter Copy URL
Copied
The Russian leader says the economic downturn will last two years at most, but adds the economic gloom has not swayed his stance on Ukraine

MOSCOW, Russia (UPDATED) – President Vladimir Putin vowed Thursday, December 18, that Russia would rapidly recover from its financial crisis and said his grip on power was firm, even as new Western sanctions and a run on the ruble pile on the pressure.

The Russian strongman, who is locked in a confrontation with the West, showed no willingness to change tack on Ukraine and dismissed the possibility of the country’s elite turning against him.

Sanctions-hit Russia is grappling with a ruble collapse seen as a major test for Putin, whose pact with voters has been based on the relative prosperity brought by years of high oil prices.

“Yes, these are not easy times,” Putin told his end-of-the-year news conference, acknowledging that oil prices could keep falling.

He said Russia’s would adjust to low oil prices, but he gave no recipe for turning the economy around.

“Under the most unfavorable world conditions, such a situation can last two years,” Putin said.

“It could improve earlier, too,” he said, praising efforts by the central bank and the government to stabilize the ruble.

Putin appeared tense at the start of the three-and-a-half-hour news conference but quickly recovered to show he was a man in control and even said he didn’t regret letting his archrival Mikhail Khodorkovsky out of prison last year.

“Godspeed, let him work,” Putin said, referring to the former billionaire who has said he is ready to replace Putin and lead Russia in times of crisis.

The president also laughed off the threat of a coup.

“As for palace coups, calm down,” Putin said in response to a question about whether he could be ousted.

“We don’t have palaces therefore we cannot have a palace coup. We have the Kremlin official residence, it’s well-protected, and this is also a factor of our state stability.”

But more importantly, Putin stressed, a majority of Russians supported him.

“People in their hearts and minds feel that we and me in particular act in the interests of a majority of the Russian population.”

Signs have been emerging over the past weeks of discontent among some officials in the top echelons of power over Putin’s confrontation with the West and mounting economic trouble.

In a hugely bold interview with Vedomosti business daily published Thursday, economy minister Alexei Ulyukayev admitted that the government lacked a coherent plan to deal with the crisis.

“I guess we found ourselves in a perfect storm, and I guess it’s not an accident,” he said. “Because in some way we prepared this storm ourselves,” he added, noting that US sanctions would likely last for decades.

The governor of the southern Krasnodar region, Alexander Tkachev, said that Russia was now paying for its “political conquests”.

Putin admitted that Western sanctions over Moscow’s involvement in the conflict in Ukraine — where 4,700 people have died in fighting between Kiev’s forces and Moscow-backed separatists — contributed “25-30 percent” to the economic turmoil.

But he said Russia’s troubles should not be put down to the annexation of Crimea, asserting that the West’s goal was to undermine Russia’s independence.

“Crimea has nothing to do with this,” Putin said, accusing the West of treating the rest of the world as “vassals” and comparing Russia to a bear.

“As soon as they have torn out its claws and teeth, then the bear won’t be needed at all — they will make a stuffed figure out of it.”

“We are protecting our independence, our sovereignty and our right to exist.”

The Russian strongman made clear that his position on Ukraine has not changed, branding Kiev’s military campaign against Russian-backed rebels in the east a “punitive operation”.

“It is indeed a punitive operation. But it is being conducted by the current Kiev authorities,” Putin said, side-stepping a question from a Ukrainian journalist.

The reporter accused Putin of conducting a “punitive operation” in Ukraine and asking how many regular troops the Russian president had sent in to prop up the separatist insurgency there.

Putin conspicuously chose not to reply to the journalist’s question on Russian troops, saying instead: “All people who perform their duty following the call of the heart or participate in the fighting voluntarily are not mercenaries because they are not getting any money for it.”

Putin sought to fight off an accusation by a Russian journalist that his policies are deeply polarizing and have triggered mounting tensions in Russia.

“All my actions are aimed at bringing our society together and not dividing it,” he said.

Western sanctions over Moscow’s interference in eastern Ukraine got even harsher on Thursday.

The European Union voted in new measures aimed at isolating Crimea, while US President Barack Obama is set to sign into law fresh sanctions against Russia and authorization for weapons deliveries to Ukraine. – Rappler.com