10 years on: The boat that rescued 59 during the tsunami BANDA ACEH, Indonesia – It’s been 10 years, but the 64-year-old grandmother remembers in vivid detail the most daunting ordeal she’s ever faced and the miraculous way she and her family survived it.

It makes for an incredible story: How Basyariah, her husband, and their three children were saved from one of the worst natural disasters in living history by a fishing boat swept inland by the tsunami.

And it’s a story she often recounts to tourists, domestic and foreign alike, who come to visit the village of Lampulo in Banda Aceh to see the boat that still sits atop her neighbor’s house. The story begins on the morning of Sunday, December 26, 2004. She was sitting on the porch of their house, which was about 3 kilometers from the shore, Basyariah would tell eager visitors.

Her husband, Syamsuddin Mahmud, now 69 and a retired public librarian, was out on the street just in front of their house, trying to get a Vespa scooter to start because they had wanted to go home to Indrapuri in Aceh Besar district.

Aceh, a decade on: Rebuilding a village

At exactly 7:58am, the ground began to shake violently. Basyariah got up and ran out to the street. Her only daughter Rita Meutia and her youngest son Zulfikar also ran out of the house. Her eldest son, Mujiburizzal, was out exercising at the nearby Blang Padang field.

After the quake, which geologists would later say had a magnitude of 9.1, Mujiburizzal came home. He found his parents, siblings and neighbors still out on the street, talking about the powerful quake.

Then they saw knee-high water rushing towards them.

Some of Basyariah’s neighbors joined the ones running away from the crowded fishing village. But somebody suggested, “Let’s go up to Abasyiah’s second floor!”

It sounded like a good idea, and about 25 of them crowded in there – mostly women and children. But the dark waters continued rising around them.

They started reciting, “La ilaha illallah” (There is no God other than Allah).

“When the water was already chest-deep, we started begging for forgiveness from one another,” Basyariah said.

“We thought it was the end of our lives.”

Saved by a boat

Then one of her neighbors stepped out onto the second floor balcony. She immediately came back, telling the everyone else that a fishing boat was stuck on the left side of the house’s roof.

The young men among them were the first to board. Then, one by one, each resident was roped into the boat that would shelter them for the next few hours.

A few minutes later, around 20 more neighbors stranded on the roof of the house behind Abasyiah’s joined them. “They didn’t even have to climb, as the bow was precisely at the end of the roof,” Basyariah said.

‘I thought that was the end of days. That the boat was sent by angels to collect us. Then it would sail to collect others.’

“I thought that was the end of days. That the boat was sent by angels to collect us. Then it would sail to collect others,” she added.

Dozens of other residents swept by the raging waters were also pulled into the boat. When they first saw the boat, there was no one in it. Within a few hours, it was sheltering 59 people, including a 3-month old baby and an 85-year old woman.

After a few hours on the boat, Basyariah said the children began to complain they were hungry. She was also hungry, she said, as she had not had breakfast.

As if by miracle, a branch full of coconuts floated nearby. “It was picked up right away. The coconut water was enough to quench our thirst, and the pulp we ate together,” she said.

By nightfall, the water had receded. One by one, they all got off the boat using a wooden ladder owned by Basyariah’s family, placed next to the house. 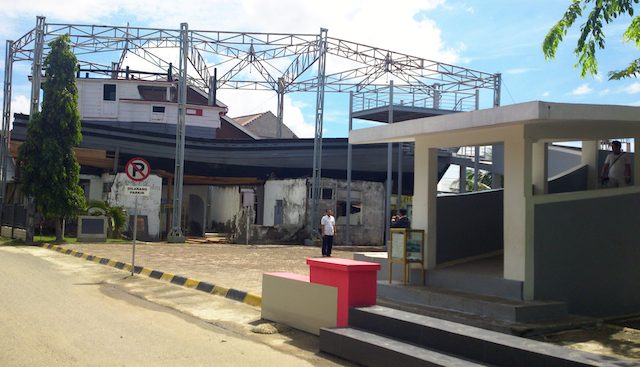 They still have that ladder, one of several mementos from the day the tsunami came that they’ve kept. Items that were submerged but relatively undamaged such as crockery cabinets, dining tables, and carpets are still being used today.

One of her most memorable mementos is a wall clock whose arms stopped moving at 8:45am, the moment the waters hit it. The clock remains hanging on her wall, flanked on each side by two small calligraphy writings with the words “Allah” and “Muhammad” on them. Neither calligraphy fell off the wall when the tsunami hit.

“The wall clock was a present for my daughter when she was chosen as the first exemplary paramedic in 2004. During the tsunami, the wall fell, maybe when the tide came. The glass broke but the arms have not changed,” Basyariah said. “Some people have offered to buy it, but we are not selling. This is a testimony of the tsunami’s ferocity.” – Rappler.com