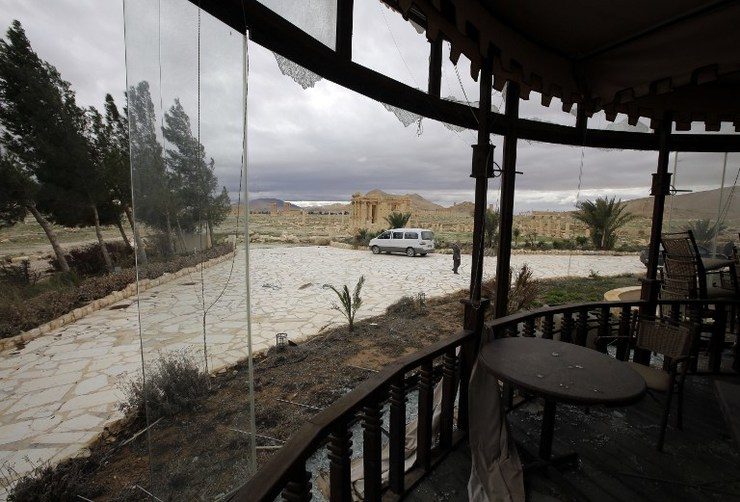 Facebook Twitter Copy URL
Copied
From prehistoric settlements and ancient markets to world-famous mosques and Crusader castles, Syria is home to countless treasures. But since the country's brutal war erupted in 2011, heritage sites have been plundered

From prehistoric settlements and ancient markets to world-famous mosques and Crusader castles, Syria is home to countless treasures.

But since the country’s brutal war erupted in 2011, heritage sites have been plundered by all sides – regime loyalists, anti-government rebels, jihadist fighters and even desperate residents.

After a major survey, the United Nations said that detailed analysis of satellite images from several hundred sites had unearthed the full scale of the damage.

The UN said the report was “alarming testimony of the ongoing damage that is happening to Syria’s vast cultural heritage,” and called for efforts to scale up their protection.

The satellite images were put together by UNOSAT, a Geneva-based UN institute.

They focused on 18 areas, six of them listed as UNESCO world heritage sites: the Old City of Aleppo, Bosra, Damascus, the Dead Cities of northern Syria, the Crac des Chevaliers castle and the Greco-Roman oasis of Palmyra.

“It is very sad for Syria as well as the world that this is happening,” UNOSAT director Einar Bjorgo told AFP. “Humankind is losing hundreds and thousands of years of heritage.”

Aleppo, Syria’s former commercial hub where settlements date back 7,000 years, has been especially hard hit in fighting between rebels and forces loyal to President Bashar al-Assad.

The 11th century Great Mosque of Aleppo saw its minaret reduced to rubble in fighting, and the famed Carlton Hotel has been pulverised, leaving behind a huge crater, the images show.

“Every time the regime or the rebels would take the mosque, they would deploy a sniper in the minaret. In the end, it was hit by an air raid,” Cheikhmous Ali of the Association for the Protection of Syrian Archaeology (APSA) told Agence France-Presse (AFP).

Ali added that Aleppo’s ancient souk, the largest market of its kind in the world, had been seriously damaged as well.

The UN images also show serious damage to Palmyra, known for its spectacular Roman colonnade, with the Syrian army building a road that cuts through the necropolis, damaging several tombs.

Ali said the road is used by tanks and that their firing is also weakening the site’s structures.

In the city of Raqa, a bastion of the extremist Islamic State (IS) group, the Sufi Muslim Uwais al-Qarni Mosque and a shrine to Ammar ibn Yasir, one of the companions of Islam’s Prophet Mohammed, have mostly been destroyed.

Ali said IS has also destroyed ancient Assyrian statues in the northwestern province of Hasakeh.

In Dura-Europos, in the eastern province of Deir Ezzor, the UN said looting has rendered “unrecognisable” a site previously known as the “Pompeii of the desert”.

Byzantine statues, pots and beads have been stolen from the site, APSA said.

The magnificent Apamea site near Hama in central Syria – a Roman archaeological jewel – has also been largely looted.

APSA has documented some 14,000 illegal digs at Apamea alone.

In Homs province, the once rebel-held Crac des Chevaliers has lost some of its facade and roof after coming under regime bombardment.

Rebels in the northwestern province of Idlib have also turned Ebla, seat of one of ancient Syria’s earliest kingdoms, into a training site.

“The danger in Syria is even greater than in Iraq. Here, sites have been turned into military barracks and battlefields,” Ali said.

“It’s a catastrophe, an immeasurable loss for humanity.” – Rappler.com