Dec 31, 2014 10:41 PM PHT
Agence France-Presse
Facebook Twitter Copy URL
Copied
Those killed are either targeted for their work or caught in the cross-fire while, while some died in accidents or natural disasters while on assignment 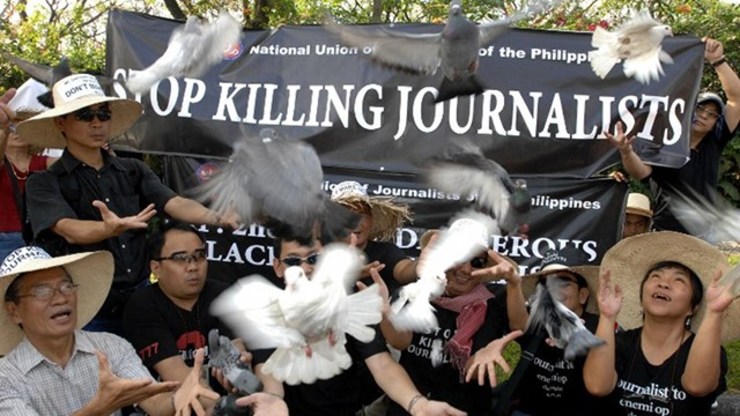 BRUSSELS, Belgium — One hundred and eighteen journalists and media staff were killed around the world in 2014, with Pakistan and Syria the deadliest countries, the International Federation of Journalists (IFJ) said on Wednesday, December 31.

The IFJ said those killed, 13 more than in 2013, were either targeted for their work or caught in the cross-fire while another 17 died in accidents or natural disasters while on assignment.

It renewed its call to governments to “make the protection of journalists their priority.” (READ: PH 3rd most dangerous country for journalists in 2013)

Journalists are “targeted not only to restrict the free flow of information, but increasingly as leverage to secure huge ransoms and political concessions through sheer violence,” IFJ president Jim Boumelha said in a statement.

He said some media organisations are now wary of sending reporters to war zones or even using material from freelancers there, warning that war coverage will “be poorer for lack of independent witnesses” unless media safety is improved.

Pakistan was the deadliest country with 14 journalists killed, followed by 12 dead in Syria and nine each in Afghanistan and the Palestinian territories.

Among those killed this year was Agence France-Presse journalist Sardar Ahmad, 40, who was shot dead in March when Taliban militants stormed a hotel in the Afghan capital Kabul. He died along with his wife and two of his three children.

Eight journalists each were killed in Iraq and Ukraine while 6 died in Honduras and 5 in Mexico.

IFJ said the public beheadings of journalists, including US freelancers James Foley and Steven Sotloff, by the Islamic State of Iraq and Syria (ISIS) militant group were a “game changer in the governments’ attitude to media projection.”

The IFJ figures, which include presenters and other staff such as drivers working for the media, are sharply higher than those given by the Committee to Protect Journalists which said a week ago that 60 journalists were killed this year.

Another watchdog, Reporters Without Borders, reported on December 16 that 66 reporters had died in 2014. — Rappler.com