Facebook Twitter Copy URL
Copied
(UPDATED) The attacks come as it emerges the suspects in the deadly Charlie Hebdo attack have been on a US terror watch list 'for years'; British intelligence warns of other 'mass casualty attacks against the West'

PARIS, France (UPDATED) – France grappled with two hostage dramas on Friday, January 9, after a gunman killed two people and seized 5 at a Jewish supermarket in eastern Paris, as police cornered the brothers suspected of carrying out the Charlie Hebdo massacre.

Heavily armed police swarmed the area around the supermarket in Porte de Vincennes as the surrounding neighborhood was placed under lockdown.

A source close to the investigation said the hostage taker was suspected of gunning down a policewoman in southern Paris Thursday and knew one of the brothers accused in the killing of 12 people at the satirical magazine Charlie Hebdo.

French police released mugshots of the man, Amedy Coulibaly, 32, as well as a woman named as 26-year-old Hayat Boumeddiene, also wanted over the shooting of the policewoman.

Both are considered “armed and dangerous,” police said. 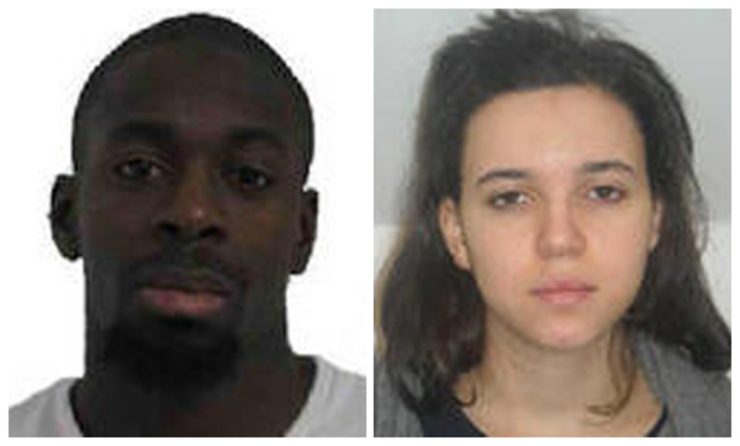 The Porte de Vincennes area in eastern Paris was swamped with police who shut down the city’s ringroad as well as schools and shops in the area.

Residents were ordered to stay indoors.

“There are at least two dead. Maybe more but for the moment, we don’t know,” said a source close to the investigation.

Meanwhile in the town of Dammartin-en-Goele, only 12 km (seven miles) from Paris’s main Charles de Gaulle airport, French elite forces deployed snipers on roofs and helicopters buzzed low over a small printing business where the Charlie Hebdo suspects were holed up with a hostage.

Police sources said there was a “connection” between the supermarket gunman and the Algerian-origin brothers Cherif and Said Kouachi, accused of carrying out France’s bloodiest massacre in half a century at Charlie Hebdo.

The massive manhunt for the two men appeared to be approaching a dramatic climax as security forces laid siege to the CDT printing business in Dammartin-en-Goele.

Ahead of the stand-off, police had already exchanged fire with the pair in a high-speed car chase.

One witness described coming face-to-face at the printer’s with one of the suspects, dressed in black, wearing a bullet-proof vest and carrying what looked like a Kalashnikov.

Schools in the area were evacuated and residents barricaded themselves indoors as the standoff with police unfolded.

One 60-year-old choked back tears as she said how elite forces burst into the shop where her daughter works and ordered them to take cover.

“My daughter told me: ‘Don’t be scared mummy, we’re well protected. She was calm but me, I’m scared. I’m really scared,” said the woman.

Prior to the standoff, the suspects had hijacked a car from a woman who said she recognized the brothers.

President Francois Hollande rushed to the interior meeting to be briefed on the situation as Prime Minister Manuel Valls declared that France was at “war” with terrorism, but “not in a war against religion.” The spectacular attacks came as it emerged the brothers had been on a US terror watch list “for years.”

And as fears spread in the wake of the attack, the head of Britain’s domestic spy agency MI5 warned that Islamist militants were planning other “mass casualty attacks against the West” and that intelligence services may be powerless to stop them.

Wednesday’s (January 7) bloodbath at Charlie Hebdo, which had repeatedly lampooned the Prophet Mohammed, has sparked a global chorus of outrage, with impromptu and poignant rallies around the world in support of press freedom under the banner “#JeSuisCharlie” (I am Charlie).

US President Barack Obama was the latest to sign a book of condolence in Washington with the message “Vive la France!” as thousands gathered in Paris on a day of national mourning Thursday, January 8, and the Eiffel Tower dimmed its lights to honor the dead.

And as a politically divided and crisis-hit France sought to pull together in the wake of the tragedy, the head of the country’s Muslim community – the largest in Europe – urged imams to condemn terrorism at Friday prayers.

In a highly unusual step, President Francois Hollande met far-right leader Marine Le Pen at the Elyseé Palace later Friday, as France geared up for a “Republican march” on Sunday expected to draw hundreds of thousands.

Interior Minsiter Bernard Cazeneuve announced that a total of 88,000 security forces were mobilized across the country and that an international meeting on terrorism would take place in Paris on Sunday.

Nine people had already been detained as part of the operation, Cazeneuve said.

‘Stupidity will not win’ Meanwhile, questions mounted as to how a pair well-known for jihadist views could have slipped through the net and attack Charlie Hebdo.

Cherif Kouachi, 32, was a known jihadist convicted in 2008 for involvement in a network sending fighters to Iraq.

Said, 34, has been “formally identified” as the main attacker in Wednesday’s bloodbath. Both brothers were born in Paris to Algerian parents.

A senior US administration official told Agence France-Presse that one of the two brothers was believed to have trained with Al-Qaeda in Yemen, while another source said that the pair had been on a US terror watch list “for years”.

The brothers were both flagged in a US database as terror suspects, and also on the no-fly list, meaning they were barred from flying into the United States, the officials said.

The Islamic State (ISIS) group’s radio praised them as “heroes” and Somalia’s Shebab militants, Al-Qaeda’s main affiliate in Africa, praised the massacre as a “heroic” act.

Refusing to be cowed, the controversial magazine plans a print run of one million copies instead of its usual 60,000, as journalists from all over the French media landscape piled in to help out the decimated staff.

“It’s very hard. We are all suffering, with grief, with fear, but we will do it anyway because stupidity will not win,” said columnist Patrick Pelloux. – With Valentin Bontemps, Agence France-Presse/Rappler.com