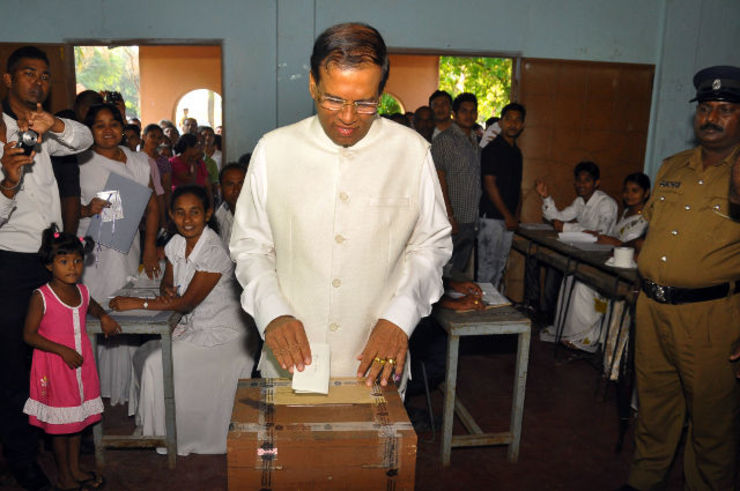 COLOMBO, Sri Lanka (UPDATED) – Maithripala Sirisena was sworn in as Sri Lankan president Friday, January 9, after a shock victory over veteran strongman Mahinda Rajapakse in an election dominated by charges of corruption and growing authoritarianism.

Sirisena took the oath of office hours after Rajapakse conceded defeat, saying he accepted the decision of Sri Lankans who turned out in force on Thursday, January 8, to vote him out after 10 years in office.

Sirisena said Sri Lanka would mend its ties with the international community, in a clear reference to Rajapakse’s falling out with the West over allegations of wartime rights abuses by the military.

“We will have a foreign policy that will mend our ties with the international community and all international organizations in order that we derive maximum benefit for our people,” he said.

Celebratory firecrackers could be heard in Colombo as Sirisena was sworn in on the capital’s Independence Square along with new prime minister Ranil Wickremesinghe.

“People want a new political culture. I don’t want anyone taking the law into their own hands,” said Wickremesinghe, the head of the opposition United National Party (UNP), at an earlier press conference.

Sirisena, a former health minister who united a fractured opposition to pull off an unlikely victory, thanked Rajapakse for a “fair election that allowed me to be the president”.

It was a remarkable reverse for a leader who had appeared certain of victory when he called snap polls in November.

Thilanga Sumathipala, a lawmaker with Rajapakse’s Sri Lanka Freedom Party, said the outgoing president had a “very emotional” meeting with ministers as he bowed out on Friday.

US Secretary of State John Kerry welcomed Rajapakse’s early concession and said he looked forward to working with the new leader.

Sirisena has promised sweeping reforms of the presidency and said he will transfer many of its executive powers to parliament.

He was elected on a tide of resentment against Rajapakse, who rewrote the constitution after his re-election in 2010 to remove the two-term limit on the presidency and give himself more powers over public servants and judges.

During the campaign, Sirisena said that he had warned Rajapakse to change his ways or risk new unrest in the country.

“He was leading the country down a dangerous road to destruction,” he had said, promising a “constitutional revolution” if elected.

Rajapakse enjoyed huge support among majority Sinhalese voters after overseeing the end of a separatist war by ethnic Tamil rebels in 2009.

But critics say he failed to bring about reconciliation in the years that followed his crushing victory over the Tamil Tiger guerrillas.

He is also accused of undermining the independence of the judiciary and has packed the government with relatives, sparking resentment even within his own party.

Rajapakse fell out with the West over allegations his troops killed 40,000 Tamil civilians at the end of the civil war, and refused to cooperate with a UN-mandated investigation.

Beijing on Friday downplayed suggestions the new leadership could impact its projects in Sri Lanka.

The opposition has promised to address international concerns over war crimes and normalize relations with Western nations and India, whose Prime Minister Narendra Modi congratulated Sirisena.

Sirisena’s decision to run triggered a slew of defections and became a rallying point for disaffection with Rajapakse and his powerful family.

His vision for the country ties in closely with the free-market policies of the center-right UNP which provided him with the political base to contest the election.

But analysts say he faces a challenge to unite the rainbow coalition of parties from right-wingers to Marxists that helped him secure victory.

The vote passed off largely peacefully, although there were some reports of intimidation in Tamil areas.

The president had come under international pressure, with Washington urging him to ensure peaceful and credible polls.

The election came days before a visit to the island by Pope Francis which some Catholic leaders had said should be cancelled in the event of violence.

Election monitors said large numbers of people had voted in the Tamil-dominated former war zones of the north and east, which are heavily militarized.

Tamils are Sri Lanka’s largest minority, accounting for 13% of the population and helped bring down Rajapakse by supporting his rival.

“We voted to get our dignity back,” said a Tamil journalist who asked not to be named.

“We may have good roads and a new railway line, but what we want is to live in peace.” – Rappler.com