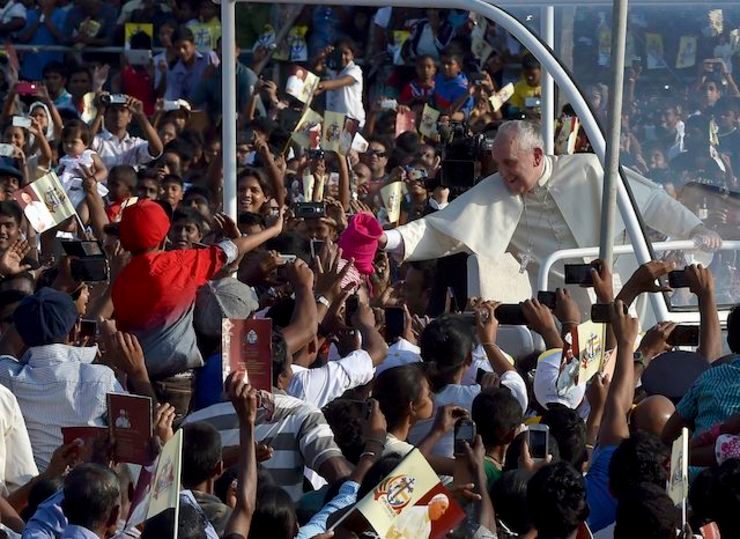 Facebook Twitter Copy URL
Copied
(UPDATED) A million worshippers pack the Colombo seafront to greet Pope Francis as he canonizes Sri Lanka's first saint on Wednesday, in the biggest public celebration the city has ever witnessed

COLOMBO, Sri Lanka (3rd UPDATE) – A million worshippers packed the Colombo seafront to greet Pope Francis as he canonized Sri Lanka’s first saint on Wednesday, January 14 in the biggest public celebration the city has ever witnessed.

Many had waited through the night to see the first pope to visit the island in two decades canonize Joseph Vaz, a 17th century missionary who disguised himself as a beggar to evade persecution.

The pope called on the sea of people, many holding umbrellas to shield themselves from the blazing sun, to follow Vaz’s example of religious tolerance as he delivered his homily on Colombo’s imposing Galle Face Green.

Francis, whose visit has focused on post-war reconciliation, said the missionary had shown “the importance of transcending religious divisions in the service of peace”, ministering to those in need regardless of their creed.

“I pray that… the Christians of this country may be confirmed in faith and make an ever greater contribution to peace, justice and reconciliation in Sri Lankan society,” he said.

Wednesday’s mass on the shores of the Indian Ocean was a colorful mix of the country’s diverse cultures, with hymns sung in both the Sinhala and Tamil languages as well as traditional dancers and drummers from around the island.

Crowds leaned in to touch the pope as he arrived in a customized open-topped car, before kissing the altar to mark the start of the service.

As a choir sang welcoming hymns, the pontiff greeted people in wheelchairs who had been pushed forward to the front of the vast crowd to receive his blessing.

Many held up mobile phones to film the 78-year-old, who smiled but appeared tired as he made his way to the specially-constructed stage.

On Tuesday, January 13, Francis cancelled a meeting with Sri Lankan bishops saying he was “exhausted” after his overnight flight from Rome and long journey from the airport exposed to the hot sun.

Police estimate a million people attended the mass, making it the city’s biggest ever public celebration.

Sri Lanka’s Archbishop Malcolm Ranjith said the pope had brought “great joy” to the island as it struggled to recover from a long civil war that killed 100,000 people.

He asked the pope to help Sri Lankans find “the strength to ask pardon from each other for the senseless violence unleashed then”.

Many worshippers clutched photographs of loved ones who could not attend, among them 54-year-old Srimathi Fernando, whose husband is recovering from a heart attack.

“I came early to grab a spot in front so that I can show this picture to the Holy Father and get a blessing for him (her husband),” she told Agence France-Presse. Worshippers held rosary beads aloft for a mass papal blessing before Francis ended the two-hour celebration with the words “go forth, the mass has ended.”

Later on Wednesday, he will head to a small church in the jungle that was on the front lines of the conflict between government troops and guerrillas seeking a separate homeland for the country’s Tamil minority.

The pope’s visit comes just days after an election that exposed bitter divisions on the island and saw the surprise exit of strongman president Mahinda Rajapakse.

On Tuesday, he said the “pursuit of truth” was necessary to heal the wounds of the conflict, weighing into a fierce debate over the investigation of alleged abuses under Rajapakse. Only around 6% of mainly Buddhist Sri Lanka’s 20-million-strong population is Catholic, but the religion is seen as a unifying force because it includes people from both the Tamil and majority Sinhalese ethnic groups.

Vaz is credited with reviving the Catholic church on the island at a time of religious persecution by Dutch colonisers, giving him a contemporary significance in a country that has suffered a rise in religious violence in recent years.

He travelled from village to village ministering to Catholics from both the Tamil and the majority Sinhalese ethnic groups, disguised as a beggar because the Dutch had banned Catholic priests from the island.

On Thursday he will travel to the Philippines, a bastion of Christianity in the region, where he is set to attract one of the biggest-ever gatherings for a head of the Catholic Church. – Rappler.com