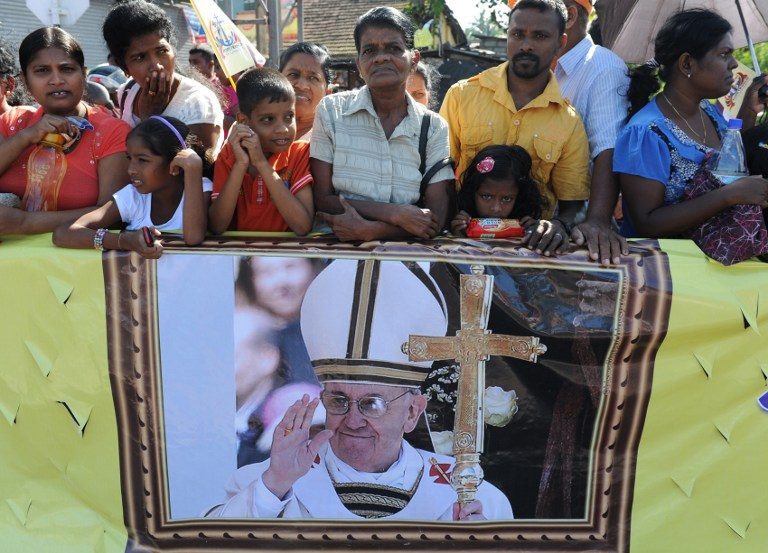 Facebook Twitter Copy URL
Copied
Despite their differing faiths, M.K. Rajini believes the Catholic leader could help heal the wounds of the long ethnic conflict that ended a little over 5 years ago

MADHU, Sri Lanka – As Pope Francis exhorted Sri Lankans to unify and confront the “evils” of their sectarian conflict, a Hindu from the teardrop-shaped island’s Tamil minority was hanging onto his every word.

M.K. Rajini, a bank worker from the war-ravaged Jaffna peninsula, travelled hundreds of miles Wednesday, January 14, to receive a blessing from the pope at a church which was on the front line of Sri Lanka’s 37-year ethnic war.

“I am a Hindu, but I came here to be blessed by him,” Rajini told the Agence France-PResse at a shrine where Pope Francis flew in by helicopter to give a service.

Despite their differing faiths, Rajini said she believed the Catholic leader could help heal the wounds of the long ethnic conflict that ended a little over five years ago.

“I hope his visit will bring us peace.”

Hundreds of thousands of Sri Lankans from across the country’s ethnic and religious divide flocked to the service on Wednesday at the Our Lady of Madhu church, which was badly damaged during the war.

In his address, the pope called for forgiveness from victims of the conflict, which killed 100,000 people and devastated the Tamil-dominated north of the country.

“There are families here today which suffered greatly in the long conflict which tore open the heart of Sri Lanka,” Pope Francis said after flying in from Colombo.

Sri Lankans should ask “for the grace to make reparation for our sins and for all the evil which this land has known”, he said in a solemn service before hundreds of thousands of worshippers.

He was the first pope ever to visit the Our Lady of Madhu church, built in a  jungle clearing in the Tamil-dominated north, that is home to a 450-year-old statue of the Virgin Mary.

The church once gave sanctuary to those fleeing the violence and is now a pilgrimage destination for Sri Lankans from both the Tamil and majority Sinhalese ethnic groups, making it a symbol of unity in a divided country.

Many of those attending Wednesday’s service were Catholic. Others such as Sinhalese Buddhist Dhammika Priyangani, who lives close by, saw it as a once-in-a-lifetime chance to see a world leader.

Many came by train, taking advantage of the recent reopening of the rail link to the north of the island that was destroyed during the conflict.

They listened intently as the pope recited a prayer to the Virgin Mary, urging “true remorse and true repentance” for what he called the “evil” of war and stressing the importance of forgiveness.

The solemn service contrasted sharply with the celebratory atmosphere earlier in the day when Pope Francis canonised Sri Lanka’s first saint at a mass in Colombo.

Analysts said the prayer in Madhu contained a strong political message for Sri Lanka, which has been criticised for failing to investigate allegations of wartime atrocities.

“It is saying we must very clearly move on a meaningful reconciliation process,” said Paikiasothy Saravanamuttu, head of the Centre for Policy Alternatives think-tank.

“We have to own up to what happened. No one has said it so strongly. There are religious elements in it, but the message is very clear.”

The pope met priest Emilianuspillai Santhiapillai, who smuggled the statue out of the church at the height of the fighting in 2008 to protect it from shelling.

An artillery strike in 1999 killed 38 people sheltering in the church, but left the statue unharmed.

Only around 6% of mainly Buddhist Sri Lanka’s 20-million-strong population is Catholic, but the religion is seen as a unifying force because it includes people from both the Tamil and Sinhalese ethnic groups.

“This is a holy shrine for all people in Sri Lanka, there is no religious difference shown,” Santhiapillai told the Agence France-Presse in Madhu before the pope’s arrival.

“Catholics, Hindus, Buddhists and Muslims all come here for the harmonious and peaceful atmosphere.” – Rappler.com