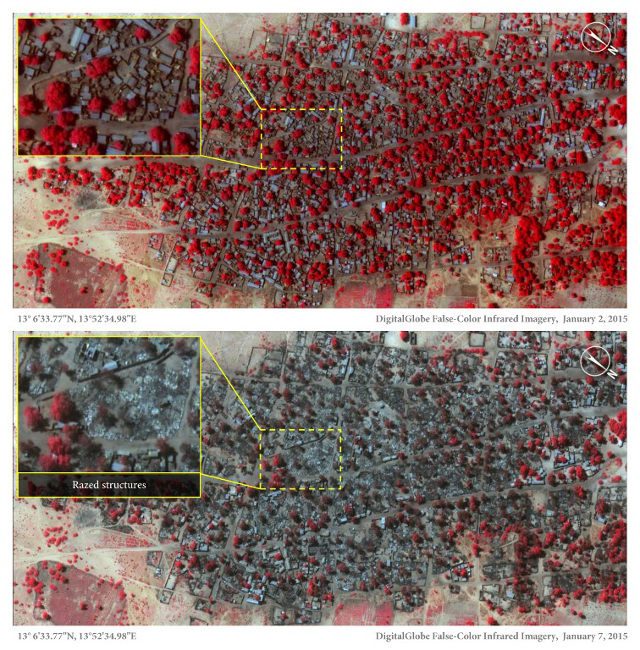 Facebook Twitter Copy URL
Copied
Amnesty International says hundreds of people, if not more, may have been killed in the attack, which began on January 3 and is thought to have targeted civilian vigilantes helping the military

LAGOS, NIgeria – Boko Haram fighters killed a woman as she was in labor during what is feared could be the deadliest attack in the militants’ six-year insurgency, Amnesty International claimed on Thursday, January 15.

The human rights group said one witness to the assault on Baga, on the shores of Lake Chad in northeast Nigeria, told them the woman was shot by indiscriminate fire that also cut down small children.

“Half of the baby boy (was) out and she died like this,” the unnamed witness was quoted as saying.

Amnesty said this week that hundreds of people, if not more, may have been killed in the attack, which began on January 3 and is thought to have targeted civilian vigilantes helping the military.

“They killed so many people. I saw maybe around 100 killed at that time in Baga. I ran to the bush. As we were running, they were shooting and killing,” a man in his fifties was quoted as saying.

Another woman added: “I don’t know how many but there were bodies everywhere we looked.”

The testimony chimes with claims from local officials that huge numbers were killed and that of witnesses spoken to by the Agence France-Presse, who described seeing decomposing bodies littering the streets.

One man who escaped from Baga after hiding for three days said he was “stepping on bodies” for five kilometres (three miles) as he fled through the bush.

Nigeria’s military, which often downplays death tolls, said this week that 150 people died, dismissing as “sensational” claims that 2,000 may have lost their lives.

Security analysts have said that it may be impossible to know exactly how many were killed, with the town and surrounding area still in rebel control and access impossible.

Amnesty on Thursday also published satellite images of Baga and Doron Baga, 2.5 kilometers away, which it said showed the scale of the attack.

Aerial shots of the two towns – which have been hit previously by fighting – were shown the day before the Islamists moved in and four days later, after they had razed homes and businesses.

“These detailed images show devastation of catastrophic proportions in two towns, one of which was almost wiped off the map in the space of four days,” said the group’s Nigeria researcher, Daniel Eyre.

More than 3,700 structures were damaged or completely destroyed – 620 in Baga and more than 3,100 in Doron Baga, Amnesty said but added that the number could be higher.

Local officials have said Baga and at least 16 surrounding settlements were burnt to the ground and at least 20,000 people fled.

Medical charity Doctors Without Borders said on Tuesday that its team in the Borno State capital, Maiduguri, was providing assistance to 5,000 survivors of the attack.

The UN refugee agency has said that more than 11,300 Nigerian refugees have fled into neighbouring Chad.

Eyre said the eye-witnesses and images reinforced the view that the attack was Boko Haram’s “largest and most destructive” in its fight to establish a hardline Islamic state in northeast Nigeria.

The statement added: “The deliberate killing of civilians and destruction of their property by Boko Haram are war crimes and crimes against humanity and must be duly investigated.”

Some 300 women were said to have been rounded up and detained at a school, witnesses told Amnesty, adding that older women, mothers and children were released after four days but younger women kept.

The Baga attack came before presidential and parliamentary elections in Nigeria next month and an upsurge in violence apparently designed to undermine the legitimacy of the vote.

On Saturday, 19 people were killed when explosives strapped to a young girl said to be as young as 10 detonated at a crowded market in Maiduguri.