Jan 15, 2015 11:59 PM PHT
Abdul Qowi Bastian
Facebook Twitter Copy URL
Copied
Jokowi is under fire from human rights activists for his firm stance on the death penalty, but he maintains a hard stance is needed to combat the threat posed by illegal drugs JAKARTA, Indonesia – Indonesia’s attorney general announced on Thursday, January 15, that the country is ready to carry out the execution of 6 people on death row on Sunday.

“The preparations for the implementation (of the execution) are almost final,” Attorney General H.M. Prasetyo announced in a press conference on Thursday afternoon.

In the first executions Indonesia will carry out since 2013 and under President Joko “Jokowi” Widodo, 4 men and 2 women will die by the firing squad.

One of the women, Tran Thi Bich Hanh, is Vietnamese, while the other is Indonesian, Rani Andriani alias Melisa Aprilia, from Cianjur, West Java.

The common thread is that all of them were convicted of drug offenses.

All 6 had their clemency appeals rejected and were notified of their impending execution on Wednesday, January 14. Indonesian law requires convicts be notified at least 3 days before their execution, during which the government will ask them for their final request.

Their respective embassies have also been notified. Prasetyo said the president of Brazil made a plea to review the case of the Brazilian on death row, but this was rejected.

“Indonesia is consistent on being tough and firm. There is no mercy for drug dealers and drug traffickers,” he said.

“Nusa Kambangan is an ideal location for carrying out the death penalty,” Prasetyo said.

“The firing squad, the spiritual leaders and the doctors have all been prepared. The executions will be done simultaneously for psychological reasons.” 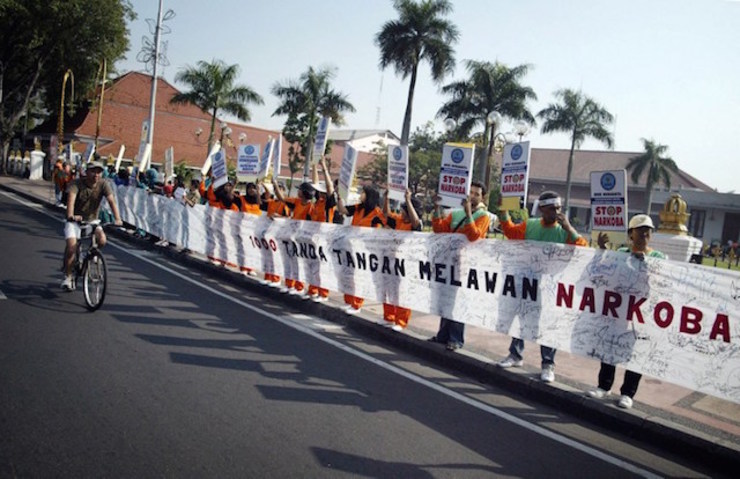 Jokowi has come under fire from human rights activists for his firm stance on the death penalty, especially against drug convicts, but the president has maintained a hard stance was needed to combat the threat posed by illegal drugs.

He has repeatedly said the country is in a state of emergency with regard to drug abuse, as there are about 4.5 million drug users in Indonesia, 1.2 million of whom are beyond the point of rehabilitation. He added that 40 to 50 young people die every day in the country due to drug abuse, according to state news agency Antara.

As a result, Jokowi has said he would reject the clemency appeals of the 64 drug convicts on death row. There are a total of 138 people on death row in Indonesia. (READ: Why Jokowi ordered the execution of drug traffickers)

“It is deeply disturbing that drug convicts are at risk of execution. Drug-related offences do not match the standards set out in international law, which only allow the death penalty for the ‘most serious crimes’,” Rupert Abbott, Amnesty International’s Research Director for Southeast Asia and the Pacific, said in a statement on December 5. – with a report from Febriana Firdaus/Rappler.com