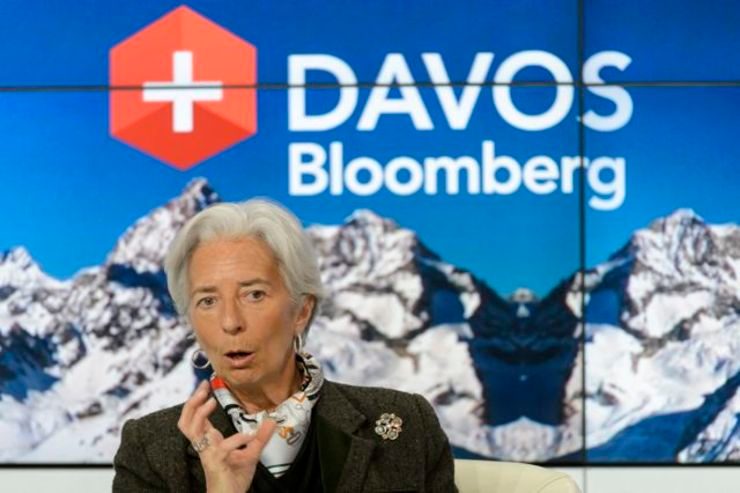 Facebook Twitter Copy URL
Copied
'There is a general expectation to compare the US economy and the euro area and I don't think that's a reality,' says IMF chief Christine Lagarde

DAVOS, Switzerland – It was supposed to be a serious debate about the merits of monetary stimulus, but instead a panel in Davos on Thursday, January 22, featuring IMF chief Christine Lagarde, quickly degenerated into a skirmish over the European economy.

“There is a general expectation to compare the US economy and the euro area and I don’t think that’s a reality,” Lagarde said after an onslaught from her largely American co-panelists, including the CEO of megabank Goldman Sachs.

Hand-wringing over the fate of a wobbly Europe has become a Davos tradition, ever since debt-wracked Greece threatened to destroy the eurozone in 2010.

This year was no different, especially with Greek elections set for Sunday and the imminent decision by the European Central Bank to unleash a massive bond-buying scheme despite the opposition of the bloc’s most powerful member, Germany.

But unlike Greece, or other usual targets France and Italy, it was Germany that stirred debate, blamed for a blind push for austerity and imposing its singular economic vision on others.

“It is the failure to recognize that a one-off model that worked to produce export-led growth for Germany in the early part of the decade will lead to an outcome that is worse for everyone now,” said former US treasury secretary Lawrence Summers.

“It is the error of assuming that the strategy that worked for one once, when applied universally will work,” he said.

Lagarde however doubted that there was that much space for Germany to do anything to help out its neighbors and that little room existed for more public spending.

Options were limited “given that we’re in a high-unemployment, high-debt environment, and given that structural reforms are fine but effectively what we need the most is demand, and not many in the eurozone have fiscal space to do that,” she said.

Summers decried a “lack of imagination” by the Europeans to solve their problems, bringing a sharp rebuke from Ana Patricio Botin, the new CEO of Spain’s Banco Santander, Europe’s biggest bank by assets.

“So you say Europe is less imaginative than the US?,” she called out to Summers, who now teaches at Harvard University.

“I’m much less negative on Europe than most Americans. We raised nine billion dollars and a lot of that came from Americans and may I say that was very smart money,” she said.

“Some of these reforms that countries like Italy (and) France have to take are much larger than what we had to take,” Gabriel, a social democrat said sympathetically.

Gabriel acknowledged that the “task for Germany today … through its own polices, its own investment is to support the EU,” he said.

But the challenge was to “persuade countries that they will benefit from structural reforms. That their children will be better served by them,” he said.

Speaking later to AFP on the Davos sidelines, Eurogroup chief Jeroen Dijsselbloem praised the authorities in France and Italy but warned the task was not yet over.

“The present governments in France and Italy are much more ambitious in terms of reforms but it still has to be done,” said Dijsselbloem, who is also finance minister of the Netherlands. – Rappler.com