BEIRUT, Lebanon – The Islamic State (ISIS) group said Sunday, January 25, it executed one of two Japanese hostages it has been holding, in an apparent beheading branded “outrageous and unforgivable” by Japanese Prime Minister Shinzo Abe.

The claim comes a day after the release of a video announcing the murder of security contractor Haruna Yukawa by the jihadist group which has beheaded 5 Western hostages since August last year.

It sought to raise the pressure on Japan by saying the fate of the other captive, freelance journalist Kenji Goto, depended on the release of an Iraqi would-be female bomber who is on death row in Jordan.

“The Islamic State has carried out its threat… it has executed Japanese hostage Haruna Yukawa after the expiry of the deadline given,” the jihadist group said on its Al-Bayan radio.

“The second hostage is calling on his relatives to put pressure on the (Japanese) government for the release of our sister Sajida al-Rishawi, held in the jails of the oppressors in Jordan, in exchange for his release.”

Rishawi was sentenced to death by a Jordanian court in September 2006 in connection with triple hotel bomb attacks in Amman the previous year that killed 60 people.

Her name emerged Saturday, January 24, in an ISIS video that showed Goto holding what appears to be a photograph of Yukawa’s slain body.

The video came with an audio recording in which a man claiming to be Goto says Yukawa was killed because Japan had failed to pay a $200 million ransom within a 72-hour deadline announced Tuesday, January 20.

The video unleashed a tide of global revulsion while Yukawa’s father voiced horror and shock.

“I thought ‘Ah, this finally happened’ and was filled with regret,” said Shoichi Yukawa.

“I went totally blank, I was only sorry… I had no words,” he said. “In my mind I wish very much that this wasn’t true.”

Abe branded the murder of Yukawa as “outrageous and unforgivable” and called for Goto’s immediate release.

“I condemn it strongly and resolutely,” said the Japanese leader. 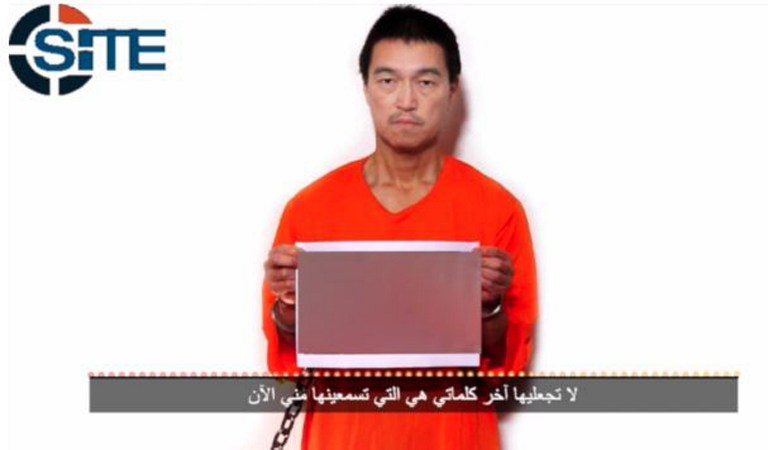 US President Barack Obama condemned the “brutal murder” and offered Abe condolences while expressing his solidarity with the people of Japan.

Germany and the EU also condemned the killing by ISIS, an extremist Sunni Muslim group which activists say carries out near-daily executions, often beheadings, in areas under its control.

The group, which originated in Iraq and appeared in Syria’s civil war in spring 2013, holds swathes of Syria and Iraq where it has declared an Islamic “caliphate”.

Since then it has committed atrocities including the beheadings of two US reporters, an American aid worker and two British aid workers.

The Amman bombings – including one that hit a hotel where a wedding party was in full swing – were claimed by Jordanian-born Abu Musab al-Zarqawi, the Al-Qaeda leader in Iraq who was killed in a US air raid there in June 2006.

His group was a precursor of ISIS, and Rishawi’s brother, Samir Atruss al-Rishawi, who was also killed in Iraq, was one of Zarqawi’s top lieutenants.

Saturday’s video was initially met with skepticism, partly because it was not posted on an official ISIS channel and does not bear their usual black and white flag.

Goto’s mother Junko Ishido told reporters Sunday she was left with little hope after seeing the picture of her son, in which he “looked very tense”.

“Japan never abandons its people,” she said. “I believe the government is united and doing its best.”

Sunday’s radio statement made no mention of the $200 million ransom that the group had initially demanded, but only referred to the release of Sajida al-Rishawi.

The 44-year-old woman has been sentenced to death in Jordan, which lifted an eight-year moratorium on capital punishment in December by hanging 11 men convicted of murder.

The ransom demand came as Abe pledged, during a trip to the Middle East, a multi-million dollar aid package to countries affected by the militant group’s bloody expansion in Iraq and Syria.

But Abe has been defiant.

“We will never give in to terrorism, and we will actively contribute to the peace and stability of the world together with the international community. We are not wavering at all on this policy,” he said Sunday. – With Miwa Suzuki in Tokyo, Japan, Agence France-Presse/Rappler.com