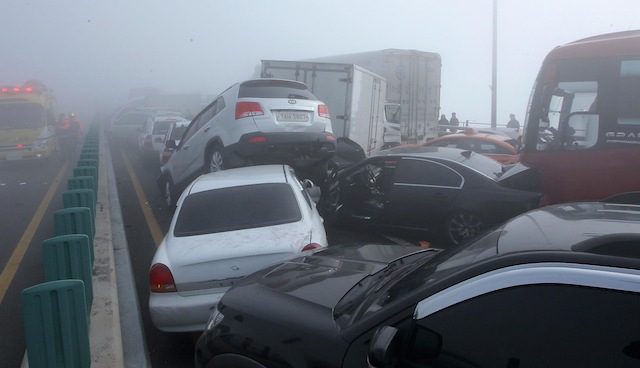 SEOUL, South Korea – Two people were killed and 43 injured on Wednesday, February 11, including 5 foreign nationals, in a 100-vehicle pile-up on the highway to South Korea’s largest international airport, police said.

The multiple collision occurred in heavy fog on the Seoul-bound lane of a bridge that forms part of the main expressway linking Incheon airport with the capital.

The pile-up appeared to have been started when a limousine ran into the back of a car, an Incheon police station spokesman said.

“More than 100 vehicles were involved,” he said, adding that the foggy conditions meant drivers could only see 15 meters (50 feet) in front of them.

Five foreigners were among the 43 injured, but their nationalities were not immediately released, the spokesman added.

TV footage showed emergency rescue workers trying to access the mass of twisted and crumpled wrecks on the fog-covered bridge.

“I heard a series of bangs in front of me. Then I was rear-ended by a following car. I felt my car turning around and hitting a protection rail. I then lost consciousness”, a cab driver, Yoo Sang-Young, told the Yonhap news agency.

Another driver said the thick fog had prevented him from seeing the danger ahead.

“I slowed down but still rammed into the cars piled up in front of me,” he said. – Rappler.com