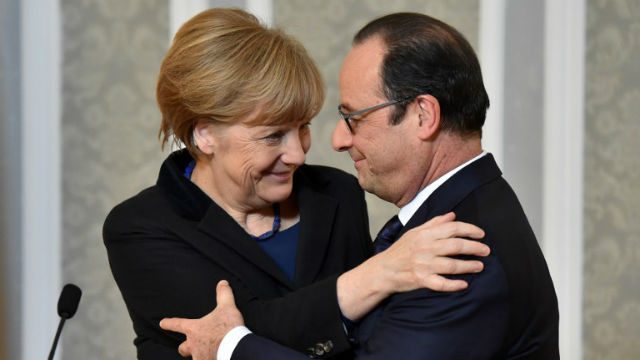 Facebook Twitter Copy URL
Copied
The new agreement notably calls for a ceasefire starting on Sunday and an expanded buffer zone around the frontline, with the withdrawal of heavy weapons

MINSK, Belarus – Kiev and pro-Russian rebels agreed a peace roadmap on February 12, after marathon negotiations in Minsk involving the leaders of France, Germany, Russia and Ukraine.

The new agreement notably calls for a ceasefire starting on Sunday and an expanded buffer zone around the frontline, with the withdrawal of heavy weapons. (READ: Marathon peace summit agrees ceasefire)

The plan, which builds on a previous failed protocol forged in Minsk in September, also lays out a roadmap for self-rule in the rebel-held areas in eastern Ukraine.

Following are the main points:

1. Immediate and total ceasefire in the Donetsk and Lugansk regions from February 15.

The zone for Ukrainian troops has to start from the de facto frontline. But for rebel forces it starts from the September 19 frontline according to last year’s Minsk pact. The separatists have however since pushed deeper into government held areas.

The withdrawal of heavy weapons must begin on the second day after the ceasefire, ie February 17, and take no more than 14 days.

3. The OSCE will check the ceasefire and heavy weaponry withdrawal from day one, and can use satellites and drones.

4. On the first day after withdrawal of heavy weapons, dialogue must start on holding local elections in Lugansk and Donetsk as well as the future “regime” in the rebel-held areas, based on Ukrainian legislation giving them temporary self-rule.

Ukraine’s parliament must within 30 days pass a decree defining the geographical area that will have self-rule, based on the September  agreement.

The separatist regions have the right to decide which language they use.

5. A law must enter force ensuring pardons and amnesty for those involved in the conflict in Donetsk and Lugansk, who will have immunity from prosecution and punishment.

6. Release and exchange all hostages and illegally detained prisoners on an “all-for-all” basis, starting five days after withdrawal of heavy weapons.

8. Both sides must work towards the restoration of social and economic links including payment of pensions, taxes.

Ukraine will restore the banking system in the conflict zones, with the possibility of an international mechanism to facilitate money transfers.

9. Ukraine must be given full control of its state border across the conflict zone. The process should start the day after local elections and must be completed by the end of 2015, on condition that constitutional reforms under point 11 have been implemented.

10. Withdrawal of all foreign armed groups, military equipment and mercenaries from Ukraine, observed by the OSCE. Disarmament of all illegal groups.

11. A new Ukraine constitution, agreed with Donetsk and Lugansk representatives, must enter force by end-2015 allowing for decentralisation. Adoption of legislation on the separatist regions’ special status, also by end-2015.

12. Local elections in separatist regions to be held, monitored by the OSCE, but no date specified.

13. Intensify activity of the trilateral contact group including creation of working groups to implement the peace plan.