Feb 24, 2015 11:53 PM PHT
Agence France-Presse
Facebook Twitter Copy URL
Copied
The law allows authorities to ban activities and meetings, and to freeze funds of individuals identified as "terrorists," though the definition of a terror group in the law is broad 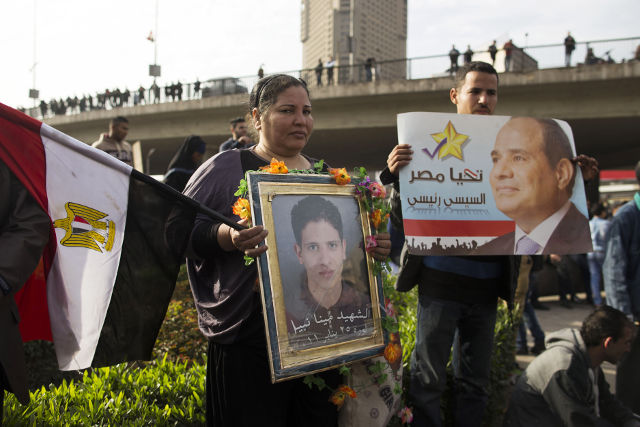 CAIRO, Egypt – Egyptian President Abdel Fattah al-Sisi has granted sweeping powers to authorities to crack down on individuals or groups deemed as threats to national security, in an anti-terrorism law announced Tuesday, February 24.

The new law comes on the back of a brutal government crackdown targeting Islamist and secular dissidents that has left hundreds dead and thousands imprisoned.

The law, published in the official gazette, allows authorities to ban activities and meetings, and to freeze funds of individuals identified as “terrorists.”

It also stipulates that “any organization …or gathering that sows terror among individuals or endangers their lives, freedoms and rights, or undermines national unity, peace or national security, will be considered as a terrorist entity”.

And any group that “hinders public or private transport or prevents public and educational institutions from performing their duties will be listed as a terror group.”

This passage appears to target Islamist protesters who have frequently demonstrated on university campuses and blocked off roads.

Promoting any such listed group would also be punishable by law.

A government crackdown has mainly targeted Islamist supporters of president Mohamed Morsi, who was toppled by then army chief Sisi in July 2013 after mass street protests against his one-year rule.

Hundreds of his supporters have been killed in street clashes with police, while thousands have been jailed after sweeping raids.

Dozens of youth activists, including several prominent symbols of the 2011 uprising which toppled longtime president Hosni Mubarak, have also been jailed.

Morsi’s Muslim Brotherhood, which swept elections after Mubarak’s ouster, has already been designated a “terrorist group”.

Authorities accuse the movement of carrying out deadly attacks that have killed scores of policemen and soldiers in the Sinai Peninsula, where security forces are fighting a brutal Islamist insurgency.