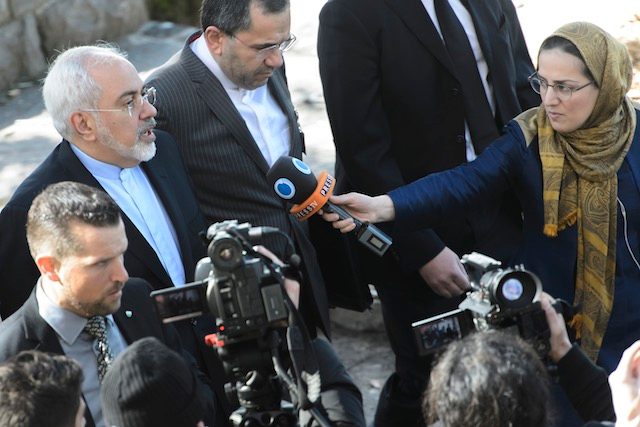 MONTREUX, Switzerland – Iran rejected on Tuesday, March 3, as “unacceptable” US President Barack Obama’s demand that it freeze sensitive nuclear activities for at least 10 years but said it would continue talks on a deal, Iran’s semi-official Fars news agency reported.

Iran laid out the position as the US and Iranian foreign ministers met for a second day of negotiations and as Israeli Prime Minister Benjamin Netanyahu delivered a stinging critique of the agreement they are trying to hammer out.

Iranian Foreign Minister Mohammed Javad Zarif and US Secretary of State John Kerry met a day after Obama told Reuters that Iran must commit to a verifiable halt of at least 10 years on sensitive nuclear work for a landmark atomic deal to be reached.

“Iran will not accept excessive and illogical demands,” Zarif was quoted by Fars as saying.

“Obama’s stance … is expressed in unacceptable and threatening phrases,” he was reported as saying, adding that talks with Kerry in Switzerland would nonetheless carry on.

The aim of the negotiations is to persuade Iran to restrain its nuclear program in exchange for relief from sanctions that have crippled the oil exporter’s economy, thereby reducing the risk of war over the protracted dispute.

The United States and some of its allies, notably Israel, suspect Iran of using its civil nuclear program as a cover to develop a nuclear weapons capability. Iran denies this, saying it is for peaceful purposes such as generating electricity.

Speaking before the US Congress in Washington, Netanyahu warned Obama against accepting a nuclear deal with Iran that would be a “countdown to a potential nuclear nightmare” by a country that “will always be an enemy of America”.

“If the deal now being negotiated is accepted by Iran, that deal will not prevent Iran from developing nuclear weapons – it will all but guarantee that Iran will get those nuclear weapons, lots of them,” the Israeli leader said in a 39-minute point-by-point critique of Obama’s Iran diplomacy.

Obama later said Netanyahu had offered no “viable alternatives” in his speech for dealing with Tehran and urged Congress to withhold judgement until an agreement with Iran had been finalised. Obama said he would only agree to a deal that prevents Iran from obtaining a nuclear weapon.

Kerry and Zarif met for more than 5 hours on Tuesday in the Swiss lakeside town of Montreux, negotiating during most of Netanyahu’s extended criticism of their efforts in Washington.

Netanyahu wants the Iranians stripped of nuclear projects that might be used to get a bomb. Washington deems the Israeli demand unrealistic.

Despite the tough tone of Zarif’s remarks quoted by Fars, the Iranian minister struck a more conciliatory note when he spoke to reporters after his morning talks with Kerry.

Asked if the two sides had reached an agreement, Zarif replied: “We’ll try, that’s why we are here.”

“The only way to move forward is through negotiations.”

The two sides have set a deadline of late March to reach a framework agreement and of June for a comprehensive final settlement to curb Iran’s nuclear activity to ensure it cannot be put to bomb making in return for easing economic sanctions.

In Washington, State Department spokeswoman Marie Harf said while there were still differences to iron out, the United States was “hopeful, realistic” that the sides would meet the March target for a framework deal. “We certainly still believe we can. Absolutely,” she told a daily briefing.

Iran wants a swift end to sanctions in any deal – one of the sticking points in the high-level negotiations.

While the United States has played the lead role in the talks with Iran, it is representing five other major powers: Britain, China, France, Germany and Russia – a group collectively known both as the P5+1 and the E3+3.

“The talks between the E3+3 and Iran are also advancing well,” he told the U.N.-backed Conference on Disarmament. “I would even go so far as to say that in 10 years of negotiations, we never achieved as much progress as we have made this year.” – With reports from Lucien Libert in Montreux, Parisa Hafezi in Ankara, Stephanie Nebehay, Tom Miles in Geneva, Dan Williams and Matt Spetalnick in Washington, Reuters / Rappler.com