The Sleman District Court in Yogyakarta on Wednesday, March 4, wrapped up a two-day hearing of her judicial review request, where lawyers for the 30-year-old mother of two argued that she wasn’t given a competent translator during her first trial, which ended in her being sentenced to death.

“After reviewing (the evidence), the panel of judges has concluded its report, and this will be sent immediately to the Supreme Court,” the lead judge, Mariyus, said.

The contents of the report are confidential.

“It’s not a recommendation. The evidence can be accepted or rejected, it depends on the Supreme Court judge,” he reportedly said.

If the Supreme Court accepts the evidence, a judicial review will be conducted.

Veloso was convicted in October 2010 of attempting to smuggle 2.6kg of heroin into Indonesia from Malaysia. But Veloso maintains she didn’t even know what was in the suitcases she was told to bring with her to Yogyakarta.

A Philippine embassy representative who was at the trial told Rappler “this is a positive development”.

“This means Mary Jane shouldn’t be transferred to Nusakambangan for execution for now.”

But Veloso hasn’t exhausted all her legal options yet. The judicial review is the final one and is only granted if new evidence is presented. If the Supreme Court rejects it, she will be executed.

Embassy officials say the “outcome we hope for is a commutation of her sentence to anything lower than the death penalty.” (READ: PH seeks case review of Filipina on Indonesia’s death row)

Veloso’s lawyers argued in court that she wasn’t able to properly defend herself during her 2010 trial because she could only communicate well in Tagalog but wasn’t given a competent translator. (READ: Lawyers for Filipina on death row: Her translator was just a student)

Agus Darwanto, the head of the College of Foreign Languages ​​(STBA) LIA Yogyakarta, testified on Wednesday that the translator used, Nuraini, was a student at the time.

As a result, Veloso did not understand what was said in the trial, which was conducted in Bahasa Indonesia, one of her lawyers, Agus Salim, said.

Answering the prosecutor’s question from Tuesday on why the translator issue was not disputed in court during the first trial, Agus said Veloso’s lawyer at the time was a pro bono one provided the court.

“Not professional,” he said. 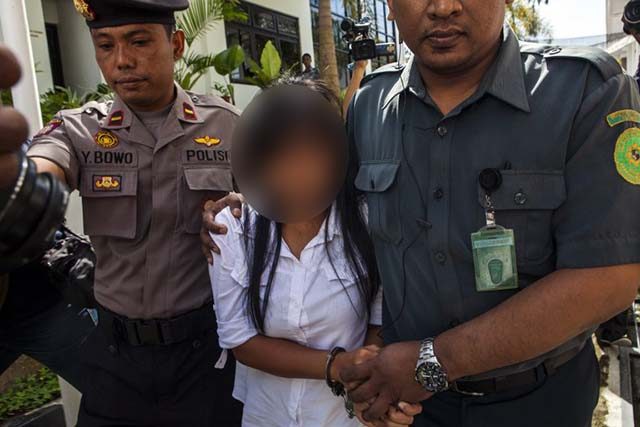 Veloso, who comes from a poor family in Bulacan, north of Manila, only made it to the first year of high school. She was in Malaysia supposedly to work as a domestic helper, but her would-be employer failed to meet her, the court heard on Tuesday. With two children back home, she agreed to an offer to bring two suitcases to Indonesia.

She was only supposed to bring the two suitcases with her on board the April 25, 2010, AirAsia flight from Kuala Lumpur to Yogyakarta, and someone was supposed to pick her up at the airport to get them from her.

But that last part never happened, because she was arrested before exiting the airport. Concealed inside the suitcases were packs of heroin wrapped in aluminum foil estimated to have a street value of IDR6.5 billion at the time (about $500,000 today).

“Mary Jane is a victim of an international drug syndicate. She was manipulated and deceived by an acquaintance named Christine to bring 2.6 kg of heroin from Malaysia to Yogyakarta,” Agus said in court.

Subsequent appeals have failed and, in January, President Joko “Jokowi” Widodo rejected her clemency request along with all others from drug convicts as part of his new administration’s harsh stance on the death penalty.

Veloso’s lawyers are confident the judicial review request will be granted because there is precedent.

The judicial review request of Thai national Nonthanam M. Saichon, who was sentenced to death by the Tangerang District Court in 2002, was granted because of the translator issue.

“(Saichon) tested positive for drugs, while Mary Jane did not,” Agus said, adding that Saichon knew what she was doing as she had the drugs hidden in her underwear.

During a state visit to the Philippines on February 9, Jokowi and Philippines President Benigno Aquino III signed 4 agreements, including one to combat illegal drug-trafficking. Contrary to previous reports, Charge d’Affairs Roberto G. Manalo of the Philippine Embassy said Aquino brought up Veloso’s case with Jokowi during the visit.

But Jokowi has issued a blanket rejection of all clemency requests from drug convicts on death row, citing Indonesia’s drug emergency, despite mounting international pressure and calls for him to consider each case on its own merit. – with a report from Jet Damazo-Santos/Rappler.com

Editor’s Note: A previous version of this story says Veloso graduated from high school. The Philippine embassy in Indonesia has clarified that she only made it to the first year of high school.