One year on, still no clue over MH370 disappearance 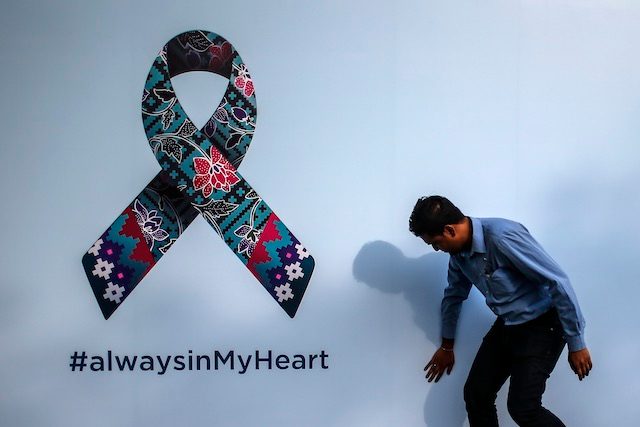 Facebook Twitter Copy URL
Copied
(UPDATED) A report into missing flight MH370 says the battery on its underwater locator beacon had expired a year before, but finds no red flags relating to the crew or aircraft to shed light on the cause of the disappearance

KUALA LUMPUR, Malaysia (UPDATED) – A report into missing flight MH370 said Sunday, March 8, the battery on its underwater locator beacon had expired a year before, but found no red flags relating to the crew or aircraft to shed light on the cause of the disappearance.

An international team of investigators probed a range of issues including the Malaysia Airlines captain and co-pilot’s personal, psychological, and financial profiles, and the backgrounds of the 10 cabin crew.

Their lengthy report, released on the first anniversary of the disappearance of the jet which is believed to have crashed in the Indian Ocean after diverting from its Kuala Lumpur-Beijing route, mentioned no findings that cast suspicion on them.

“There were no behavioral signs of social isolation, change in habits or interest, self-neglect, drug or alcohol abuse of the Captain, First Officer and the Cabin Crew,” it said.

The report said, however, that civilian radar had tracked the plane for a short time after it diverted on March 8 of last year. Previous Malaysian statements had indicated that only its military radar had monitored the plane.

It noted that while batteries can still operate past their official expiry, they may lose effectiveness, calling it an “oversight.”

The report said airline blamed a problem in computer systems that track equipment updates, and that it had subsequently carried out a fleet-wide inspection to make sure records were accurate.

Representatives from neither Malaysia’s civil aviation authority nor the national carrier were immediately available for comment.

“My major worry is that (search vessels) may have gone over the aircraft but not heard the pings because of this,” said Gerry Soejatman, a Jakarta-based aviation consultant, said of the expired battery and the so-far-fruitless search for the jet.

Otherwise, he said the report mostly restated what is already known about MH370.

“There is nothing much to go on with the new report,” he said, adding “there is little to analyze.”

The investigative team was set up in the weeks after the plane’s disappearance under International Civil Aviation Organization (ICAO) requirements and was required to submit its findings within one year of the disappearance.

The report ticked through a number of the plane’s major mechanical systems and noted in each case that according to available data and maintenance records, nothing alarming was seen.

It remains unknown what caused the Boeing 777 to veer from its Kuala Lumpur-Beijing route with 239 passengers and crew aboard.

Suspicion had fallen on the cockpit crew of pilot Zaharie Ahmad Shah and his co-pilot Fariq Abdul Hamid. Other theories have included a mechanical problem or hijack.

The report was focused on air-safety issues related to MH370. The investigators did not probe the 227 passengers or the possibility of a hijack.

The report stressed that the investigation was ongoing and that “new information that may become available may alter this information.”

“The investigation team expects that further factual information will be available from the wreckage and flight recorders if the aircraft is found,” it said.

A year-long, Australian-led search effort in the southern Indian Ocean where the plane is believed to have crashed has yielded nothing as yet.

Next of kin have been sharply critical of Malaysia’s initial handling of the crisis and remain deeply unhappy with the lack of answers one year on. – Rappler.com