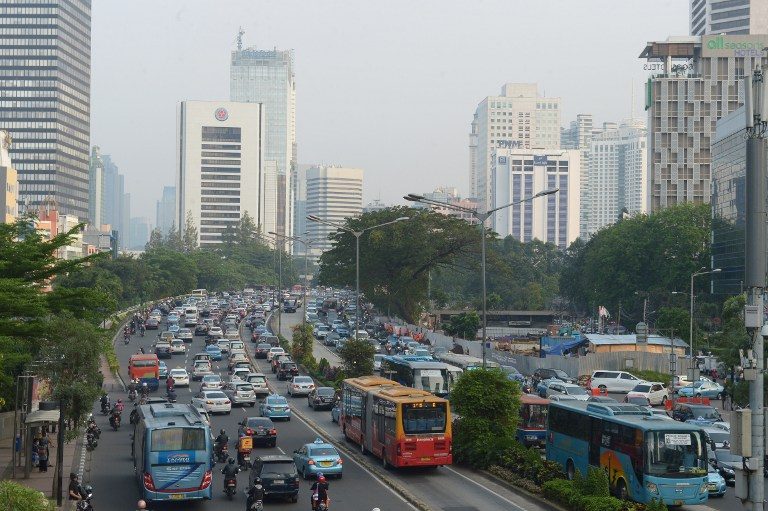 Facebook Twitter Copy URL
Copied
We know that Jakarta’s traffic is bad. But how bad is it really?

JAKARTA, Indonesia— It’s no secret that Jakarta’s traffic is bad. Okay, it can be a nightmare. But have you ever wondered how bad it actually is?

Waze, the popular mobile map app that crowdsources traffic information, gives us the numbers based on what they’ve learned from their users in Jakarta in 2014. (READ: Terkejut? Jakarta merajai kota macet dunia 2014)

First off, let’s put Jakarta traffic into context: In 2012, the Public Works Ministry estimated that people take almost 20 million trips a day around Jakarta. In New York, where traffic is arguably also bad, taxicabs take less than half a million trips per day.

And they’re not getting there fast enough.

1. How fast are Jakartans driving?

Speeding is definitely not a problem in Jakarta, where shifting into third gear can sometimes feel like a luxury. According to Waze, on weekdays, drivers average 18 kilometers per hour (km/h). It’s not much better on weekends, where the average speed goes up to just 22km/h.

FYI, you can travel the same speed on a bicycle. Waze says the comfortable bicycle cruising speed is 19km/h. Maybe Jakartans should all just bike then?

2. Which days are the worst for traffic?

You might be surprised to know that Mondays or Fridays are not the worst traffic days.

Maybe it’s the drudgery of the midweek, but on this day Jakarta motorists drive at the slowest pace – less than 18km/h – and suffer the longest drive times of 43 minutes on average.

For some reason, Tuesdays are the best. Waze data doesn’t say why, but it does say there are 5% less drivers on the road than average during the second day of the working week.

Saturday is a different story: There are 20% more drivers on the road on this day, and Waze has recorded the most number of reported accidents on this day. Hati-hati!

You might be thinking, “well, at least we have public holidays where the traffic is better”. Not so fast.

According to Waze data, roads didn’t clear up during the public holidays last year. Instead, it got worse, especially on the days before and after the holiday. The only exception – and anyone who knows Jakarta will attest to this – is Idul Fitri, where the city becomes almost like a ghost town. 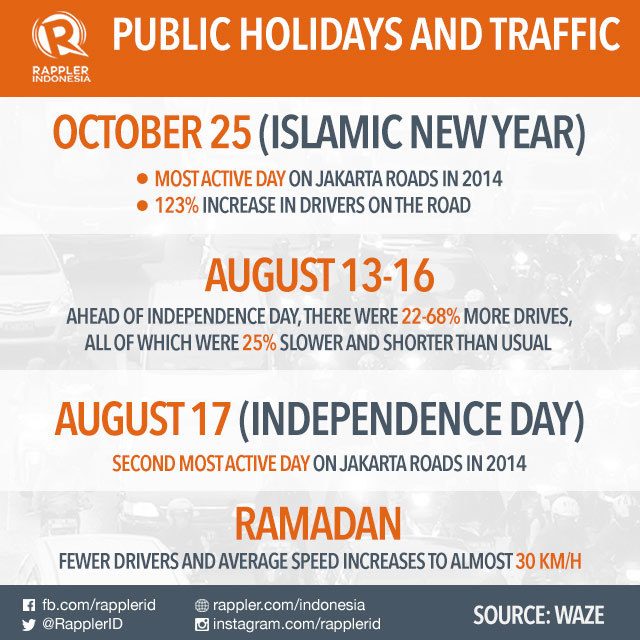 4. What happens when it rains?

Bad weather, apparently, doesn’t deter Jakarta’s motorists. Waze data showed no difference in driving patterns during November, December, and February – when users reported bad weather and floods the most – compared to the rest of the year.

“Maybe it’s a different state of mind, or maybe the people in Jakarta using Waze aren’t actually driving, but aiding in the relief effort by reporting the areas near them that are flooded or impassable to help other drivers still stuck on the roads,” Waze said in its report, citing efforts to crowdsource flood reports like Peta Jakarta. (READ: Tweet to map floods in Jakarta, and help save lives)

All this, of course, only reinforces what Jakartans already know. In fact the 2014 Stop-Start Index by Castrol Magnatec showed Jakarta has the worst traffic among 78 cities studied. Using data shared anonymously by millions of TomTom navigation users around the world, the report stated that motorists in the Indonesian capital stop and start 33,240 times in a year – that’s more than 90 times a day! A close second is Istanbul with 32,520 start-stops a year, but a second Indonesian city – Surabaya – comes in at 4th place with 29,880.

The government is also keenly aware of the problem, and Jakarta Governor Basuki “Ahok” Tjahaja Purnama has all sorts of plans ranging from banning motorycles on certain roads to installing an electronic road pricing system to prevent the capital from becoming completely gridlocked. —Rappler.com