Pilot ‘locked out’ of cockpit before Germanwings crash – reports 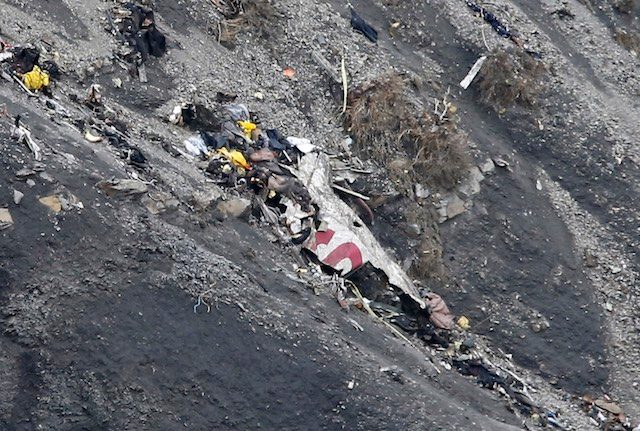 Facebook Twitter Copy URL
Copied
(UPDATED) The cockpit voice recording told the investigators that at the moment of the crash 'the other pilot is alone and does not open the door,' the New York Times reported

MANILA, Philippines (UPDATED) – One of the pilots of the Germanwings flight that crashed in France on Tuesday, March 24, was locked out of the cockpit before the plane descended and was not able to get back, reports, citing sources privy to the investigation, said Thursday, March 26.

An Agence France-Presse source said cockpit recordings recovered from the crash site indicated one of the seats was pushed back and the door opened and closed. Then knocking is heard, said the source, adding “there was no more conversation from that point until the crash”.

The source said an alarm indicating the proximity to the ground could be heard before the moment of impact.

All those on board were killed when Germanwings flight 4U 9525 from Barcelona to Duesseldorf crashed in remote terrain Tuesday, March 24, after an unexplained eight-minute descent in mid-flight.

No distress signal was sent from the Airbus A320 and the crew failed to respond to ground control’s desperate attempts to make contact.

The cockpit recording showed the pilots speaking normally in German at the start of the flight, the source said, adding that it could not be determined if it was the captain or the first officer who left the cockpit.

The New York Times cited a senior military official involved in the investigation as saying the black box data indicated one pilot tried unsuccessfully to bash his way back in to the cockpit.

“The guy outside is knocking lightly on the door, and there is no answer,” the investigator told the newspaper. “And then he hits the door stronger, and no answer. There is never an answer.” He continued: “You can hear he is trying to smash the door down.”

In a statement overnight, Germanwings said that “at the moment, we do not have information from competent authorities to confirm this story.”

“We are doing everything to get the most information possible and we are not engaging in speculation.”

Under strengthened security measures introduced after the September 11, 2001 hijackings and attacks, authorization to open a cockpit door can only come from inside and from a pilot.

Authorities have said they have no explanation as yet for the tragedy, but said that the plane was still flying when it crashed into the mountain and did not explode mid-air. Aviation experts interviewed by Agence France-Presse suggested several theories. “If the pilots did not stop the airplane from flying into the mountains, it is because they were unconscious or dead, or they had decided to die, or they were forced to die,” one expert said.

Photos of the mangled black box retrieved at the site showed its metal casing torn and twisted by the violence of the impact. The casing of a second black box, the flight data recorder, has been found but not the device itself.

Arrangements were being made for the families of the victims, at least 51 of whom were Spaniards and at least 72 Germans, to gather near the crash site Thursday, March 26.

Lufthansa, which owns the popular low-cost operator, announced it would provide two flights to take the victims’ loved ones from Barcelona and Duesseldorf to the southern French city of Marseille.

The mountain village of Seyne-les-Alpes, which is serving as the base of the rescue operation, lies about 180 kilometers northeast of Marseille.

The families are not expected to travel as far as the crash site, and early Thursday police were guarding access to the area.

Helicopters began winching the remains of victims, found scattered across the scree-covered slopes, to Seyne-les-Alpes Wednesday, March 25, a source close to the investigation told Agence France-Presse.

Lyon-based international police agency Interpol said it had dispatched a team of victim identification experts to the site.

Authorities on the ground who had the gruesome task of sifting through the debris were to resume the search at dawn Thursday.

A mountain guide who got near the crash site said he was unable to make out recognizable body parts.

“It’s incredible. An Airbus is enormous. When you arrive and there’s nothing there… it’s very shocking,” said the guide, who did not wish to be identified.

The crash site, which is situated at about 1,500 meters (5,000 feet) altitude, is accessible only by helicopter or an arduous hike on foot.

‘Not the slightest explanation’ On Wednesday, the head of France’s Bureau d’Enquetes et d’Analyses (BEA) crash investigation agency head Remi Jouty told reporters he still had “not the slightest explanation” for the tragedy at this stage.

“The plane was in perfect condition and the two pilots were experienced.”

Weather did not appear to be a factor in the crash, with conditions calm at the time, and Germanwings had an unblemished safety record.

French President Francois Hollande and German Chancellor Angela Merkel flew over the site to see the devastation for themselves Wednesday. Spain’s Prime Minister Mariano Rajoy also visited a crisis centre near the scene.

The plane was carrying six crew and 144 passengers, including 16 German teenagers returning home from a school trip.

Compounding the tragedy, it emerged that the students killed had won the trip in a lottery of their classmates, reported local daily the Halterner Zeitung.

Also on board were opera singers Oleg Bryjak, 54, and Maria Radner, 33, flying to their home city of Duesseldorf. Radner was traveling with her husband and baby, one of two infants on board the plane.

It was the deadliest air crash on the French mainland since 1974 when a Turkish Airlines plane crashed, killing 346 people.

Lufthansa said the aircraft was carrying citizens of 18 countries. Three Americans and three Britons were confirmed among the victims.

Argentina, Australia, Belgium, Colombia, Denmark, Holland, Israel, Japan, Mexico and Morocco also had nationals on board, according to officials. – With reports from Agence France-Presse / Rappler.com