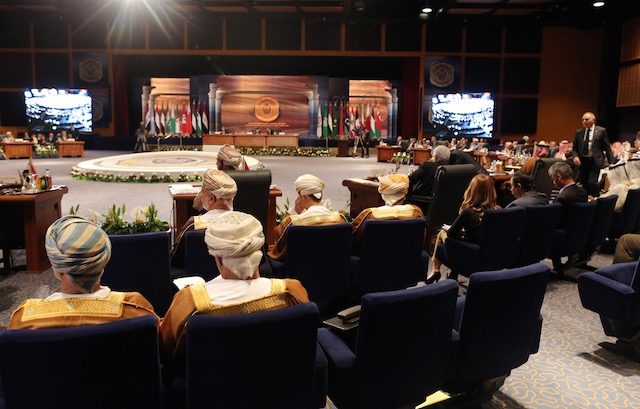 SHARM EL SHEIKH, Egypt – Arab leaders agreed on Sunday, March 29, to form a joint military force after a summit dominated by a Saudi-led offensive on Shiite rebels in Yemen and the threat from Islamist extremism.

Arab representatives will meet over the next month to study the creation of the force and present their findings to defense ministers within 4 months, according to the resolution adopted by the leaders.

“Assuming the great responsibility imposed by the great challenges facing our Arab nation and threatening its capabilities, the Arab leaders had decided to agree on the principle of a joint Arab military force,” Egyptian President Abdel Fattah al-Sisi told the summit in the resort town of Sharm el-Sheikh.

The decision was mostly aimed at fighting jihadists who have overrun swathes of Iraq and Syria and secured a foothold in Libya, Arab League chief Nabil al-Arabi said ahead of the summit.

On Sunday, Arabi told the meeting the region was threatened by a “destructive” force that threatened “ethnic and religious diversity”, in an apparent reference to the Islamic State (ISIS) group.

“What is important is that today there is an important decision, in light of the tumult afflicting the Arab world,” he said.

Egypt had pushed for the creation of the rapid response force to fight militants, and the matter gained urgency this week after Saudi Arabia and Arab allies launched air strikes on Huthi rebels in Yemen.

Arabi, reading a statement at the conclusion of the summit, said on Sunday the offensive would continue until the Huthis withdraw from regions they have overrun and surrender their weapons.

Several Arab states including Egypt are taking part in the military campaign, which Saudi King Salman said on Saturday, March 28, would continue until the Yemeni people “enjoy security”.

Yemeni President Abedrabbo Mansour Hadi at the start of the summit called for the offensive to end only when the Huthis “surrender”, calling the rebel leader an Iranian “puppet”.

However, UN Secretary-General Ban Ki-moon urged the leaders to find a peaceful resolution in Yemen.

“It is my fervent hope that at this Arab League summit, leaders will lay down clear guidelines to peacefully resolve the crisis in Yemen,” he said.

James Dorsey, a Middle East analyst with the Singapore-based S. Rajaratnam School of International Studies, said that despite support for a joint-Arab force, “it would still take months to create and then operate on an ad-hoc basis.

“I don’t think we will get an integrated command anytime soon, as no Arab leader would cede control of any part of their army anytime soon,” he said.

“Today we will have a formal declaration that would be negotiated every time during action.”

Sisi said in a recent interview that the proposal for a joint force was welcomed especially by Jordan, which might take part alongside Saudi Arabia, the United Arab Emirates and Kuwait.

Aaron Reese, deputy research director at the Washington-based Institute for the Study of War, said “each of these countries would bring a different capability.

“The Jordanians are well known for their special forces capability… the Egyptians of course have the most manpower and bases close to Libya.”

Before Egyptian air strikes in February targeting the ISIS in Libya, the United Arab Emirates, which shares Cairo’s antipathy towards Islamists, had reportedly used Egyptian bases to launch its own air strikes there.