Apr 4, 2015 1:06 AM PHT
Agence France-Presse
Facebook Twitter Copy URL
Copied
'This set of solutions will be the basis for writing a final document,' Zarif said in the airport 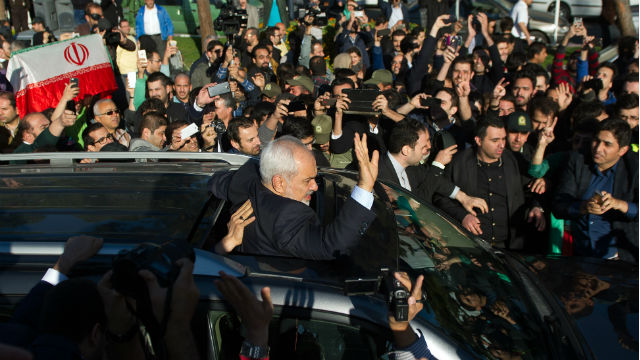 TEHRAN, Iran – A crowd of well-wishers hailed Iranian negotiators Friday, April 3, as they returned to Tehran after agreeing the framework of a potentially historic nuclear deal with world powers, Iranian news agencies reported.

In brief remarks at the airport, Zarif praised Iran’s supreme leader Ayatollah Ali Khamenei for “his remarkable support for the negotiating team and his guidance” in the talks, the official IRNA news agency reported.

Reaching out to Iranian hardliners who have opposed any deal that would curb Tehran’s nuclear activities, Zarif said work remained to finalize the agreement before a June 30 deadline.

“This set of solutions will be the basis for writing a final document,” he said in the airport.

Residents lined the streets as Zarif drove away from the airport, many carrying Iranian flags, with the minister emerging from the sunroof of his car and waving to the crowd. – Rappler.com