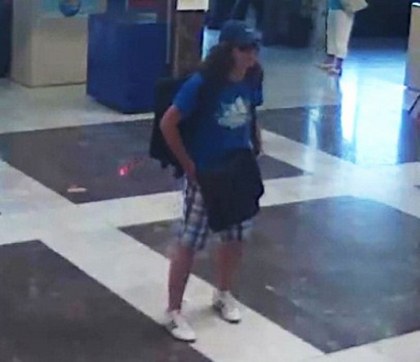 BURGAS, Bulgaria – Bulgarian authorities on Thursday, July 20, released images of the suspected suicide bomber behind a deadly attack on Israeli tourists that Israel has blamed on Iran.

US investigators from the FBI joined the probe into Wednesday’s bombing at a Black Sea airport that killed 6 people and wounded more than 30 as international condemnation of the attack grew.

“The suicide bomber, wearing shorts and carrying a backpack, looked like any other tourist,” said Bulgarian Interior Minister Tsvetan Tsvetanov.

Authorities released a video showing a white man with long hair, possibly a wig, and sunglasses wandering around Burgas airport.

Tsvetanov said he appeared to be aged about 26 and had a fake driving licence from the US state of Michigan.

The authorities had taken fingerprints and were being helped by the US Federal Bureau of Investigation, Interpol and Europol, to discover the bomber’s identity, the minister said.

The explosion ripped through a bus as around 50 Israeli tourists arriving from Tel Aviv were loading their bags before travelling to a nearby holiday and gambling resort.

Five tourists were killed at the scene. The Bulgarian driver died later in hospital, officials said. Thirty-two people were wounded.

The remains of the victims arrived early Friday at Ben Gurion airport in Tel Aviv.

The five coffins, with Israeli flags draped over them, were taken off a military plane that landed at 12:30 am Friday (2130 GMT Thursday). Dozens of mourning relatives had gathered for the plane’s arrival.

Many of the wounded, including teenagers, also arrived back in Tel Aviv after being flown home by the Israeli air force.

These included a pregnant woman and a young girl who was carrying a sandal because her right foot was wrapped in bandages.

Many had been taken in wheelchairs to ambulances to board the flight home, some still with their blood-stained holiday clothes on.

Witnesses to the bloody attack described how panicked passengers jumped from bus windows and bodies lay strewn on the ground with their clothes torn off.

“I would have lost my life in a split-second, had I not jumped out of the bus’s window,” survivor Moshe Moseri told Israeli news website Walla, describing seeing “corpses on the floor with their arms and legs severed”.

Israeli Prime Minister Benjamin Netanyahu said the attack was part of “a global campaign of terror carried out by Iran and Hezbollah”.

US President Barack Obama said the United States “will stand with our allies, and provide whatever assistance is necessary” to catch the perpetrators of what he called a “barbaric terrorist attack”.

The diplomatic Quartet on the Middle East peace process — the European Union, Russia, the United Nations and United States — branded the attack as “brutal” and an “act of cowardice” against innocent victims.

The UN Security Council said in a statement it “condemned in the strongest terms the terrorist attack aimed at Israeli tourists.”

Iran’s state television said Israel’s “ridiculous” accusations were “aimed at creating an anti-Iranian atmosphere” amid rising tensions over Tehran’s nuclear drive which the West suspects is aimed at building the atomic bomb.

“The Zionist regime, which is responsible for terrorist acts organised in Lebanon, Palestine and against Iranian nuclear scientists… is launching baseless accusations against other countries to forget its own terrorist nature,” a foreign ministry spokesman said.

The bomber struck on the 18th anniversary of an attack on a Jewish community centre in Argentina that killed 85 people and was also blamed on Iran.

On top of the condemnation, several countries have boosted security, including Cyprus and Bulgaria’s neighbour Austria.

Burgas airport reopened under heavy security with all traces of the attack removed, although the bomb site remained off-limits behind police tape.

A cordon was set up around the airport building where people had to have all bags checked.

Austria, which is home to about 10,000 Jews, said it had taken extra security measures at Jewish community buildings, airports and for groups of Israelis in the country.

The bus wreckage was loaded on to a truck and taken away, along with another bus that also caught fire in the blast and which had a large blood stain down its side.

Israel and Bulgaria have good relations and the Black Sea coast has become a popular holiday spot for Israelis, with almost 140,000 visiting the country in 2011. About 13 percent of the Bulgarian population is Muslim. – Agence France-Presse