ANSAN, South Korea (2nd UPDATE) – South Korea’s president vowed to raise the sunken Sewol ferry Thursday, April 16, but failed to appease grieving relatives on the first anniversary of the disaster that claimed 304 lives – most of them schoolchildren.

“I will take the necessary steps to salvage the ship at the earliest possible date,” Park Geun-Hye announced during a brief visit to the southern island of Jindo – the closest landfall to the site where the Sewol sank on April 16.

Her announcement followed weeks of protests by victims’ families demanding a firm commitment on raising the 6,825-tonne ferry, despite the technical challenges and the estimated $110 million cost.

But the families were still not satisfied and boycotted a planned anniversary memorial event, saying Park had failed to give other assurances on ensuring a fully independent inquiry into the tragedy.

The tense to-and-fro reflected the depth of the residual anger in South Korea a year after the passenger ferry went down.

While largely blamed on the ship’s illegal redesign and overloading, the accident laid bare deeper-rooted problems of corruption, lax safety standards and regulatory failings attributed to the country’s relentless push for economic growth.

Of the 304 who died, 250 were children from the same high school in Ansan, a city south of Seoul that was the focus of Thursday’s remembrance activities. 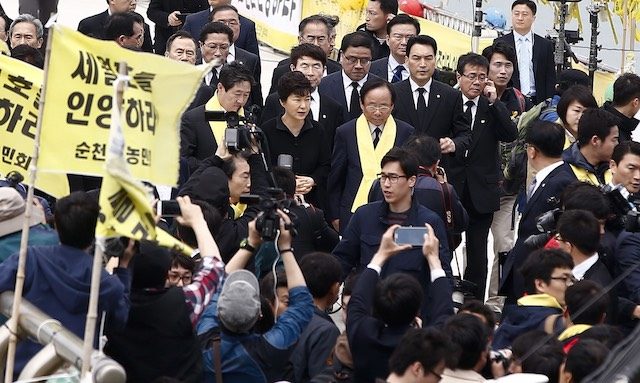 Flags flew at half mast and yellow ribbons fluttered from trees and lamp posts across the city, where sirens blared at 10 am local time (0100 GMT) and residents bowed their heads for a minute’s silence and prayer.

Despite torrential rain, thousands of mourners passed through a memorial hall containing hundreds of black-ribboned, flower-ringed portraits of the dead students.

Parents and other relatives sobbed and beat their chests as they left messages, stuffing animals and favorite snacks under the framed photos.

“My son, I hope you’re happy up there. Mom misses you so much,” one message read.

A giant screen showed a slideshow of family pictures below a large banner that read: “We’re sorry. We love you. We won’t forget.”

Uniformed students from Danwon High School were among those who paid their respects, standing in tearful silence before the portraits of their dead classmates.

A formal memorial event had been scheduled for the afternoon in Ansan, but the victims’ families cancelled it, despite Park’s agreement to salvage the ferry.

Yoo Gyoung-Geun, a spokesman for the families, said there was anger that the president had not given assurances regarding the independent inquiry demands.

Public opinion has been largely supportive of the families, although some conservative groups say left-wing organizations have hijacked the cause in an effort to embarrass the government. 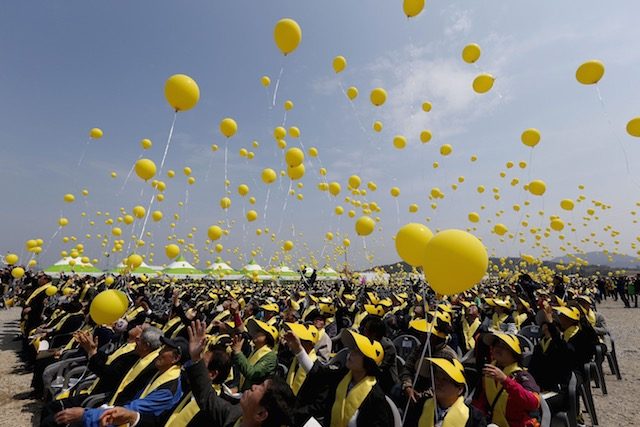 A total of 295 bodies were recovered from the ferry, but 9 remained unaccounted for when divers finally called off the dangerous search in November.

The families of those still missing had spearheaded the calls for the ferry to be brought to the surface.

“My heart still aches when I think of the nine people who are still under the cold water, and of their families,” Park said in Jindo.

The president had intended to pay her respects at a special altar erected at the island’s harbor, but angry relatives had put up a barrier to block her access.

And when Prime Minister Lee Wan-Koo went to Ansan on Thursday morning, he was turned away at the entrance to the remembrance hall by victims’ families.

After returning to Seoul, Park left for an official tour of South America, despite media criticism over the timing of her departure.

Park and her administration had promised an overhaul of national safety standards after the disaster, but most believe their efforts have fallen short.

“Nothing has changed,” the JoongAng Daily newspaper said in an editorial Thursday, while the largest circulation Chosun Ilbo concluded that “the country remains unsafe”.