Apr 20, 2015 12:03 AM PHT
Agence France-Presse
Facebook Twitter Copy URL
Copied
'In Venezuela, you don't really live any more. You survive. You get by. You work to get from one day to the next.' 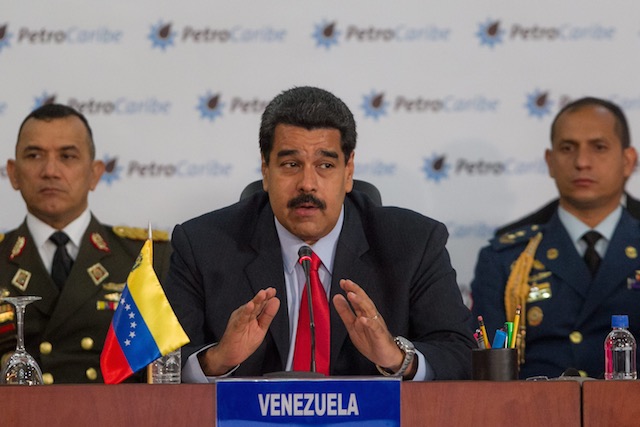 “It is very clear that Venezuelans of all socioeconomic groups have seen their quality of life lose ground. But the poor are those who have lost the most,” said economist Maxim Ross at the Universidad Monte Avila in Caracas.

The political heir of late socialist president Hugo Chavez, Maduro took office after a bitterly fought election with the heavyweight opposition candidate Henrique Capriles, who said the polls were rigged.

Chavez might have been an icon for many Venezuelans, but he left Maduro with annual inflation at over 20%, shortages of some basic consumer goods and a quarter of the people living in poverty.

Now 24 months on, annual inflation has soared to a whopping 68.5%. Shortages hit most consumer goods from food to diapers to shampoo.

On any given day, people in Venezuela can wait hours to get some subsidized milk, cooking oil, milk or flour – if they can be found at all.

And poverty – one of the theoretical focal points of the “revolutionary” government – has not been reduced: rather, it is up to 32%.

“I have nothing against Maduro, but this government has wrecked absolutely everything,” said Luisa Marina, a single mother of two who works as a housekeeper, seated on a bench in the working-class Caracas neighborhood of Petare.

“These have been the shortage years,” she says, sounding resentful that the government “even found a way to take the cash remittances” she used to send home from Colombia for years.

But it is not only the working class who say they are suffering and whose salaries are being eroded by crippling inflation.

Over in the upscale district of Chacao, computer science student and sound mixer Vladimir Zambrano says his salary in the past two years has rocketed up from 7,500 bolivars to 15,000 bolivars a month now (officially now $2,300).

That might sound a lot, but with many Venezuelans turning to the black market to get their daily needs, the money does not go far.

On the black market, prices can hit 1,000% of the official price – when the product is available. That helps fuel rampant corruption and smuggling.

“In Venezuela, you don’t really live any more. You survive. You get by. You work to get from one day to the next,” said Zambrano.

“Young people don’t think about permanent jobs any more, or saving up for an apartment. They just think about what they are going to have in their pocket the next day.”

Ross, like many experts, says the economic mess is the result of bad central economic planning, too much bureaucracy, and the failure to adapt to falling international oil prices. OPEC-member Venezuela depends on them for almost its entire budget.

In Maduro’s view, however, his government keeps lifting Venezuelans out of malnutrition and the president blames everyday hardships on the “economic bourgeoisie” linked to Colombia and the United States, regarded as the chief antagonist.

But he is under pressure in a way Venezuela clearly never anticipated, and with his popularity foundering at about 25%.

Nationwide demonstrations erupted against him last year, but there has been no mass repeat and security forces have moved swiftly to squash any hint of unrest.

“Almost all oil-dependent countries have a reserve fund for bad times. But not Venezuela.”

The president – who is also battling sky-high crime – may have to take on raising the price of gasoline (petrol), the world’s cheapest and which many Venezuelans have come to see as a birth right.

In the past just discussing the emotive issue sparked revolts that turned deadly.

It will be a massive challenge to see how he can maintain huge social spending and subsidies with oil prices still low, experts say.

At the moment, opposition forces are leading in early surveys ahead of December legislative midterms. But they are facing the ongoing detention of some of their key leaders, blunting their chances. – Jordi Miro, AFP / Rappler.com