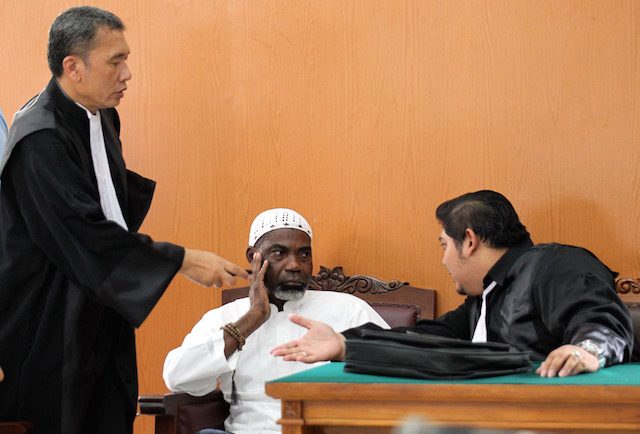 JAKARTA, Indonesia – Indonesia’s Supreme Court has rejected an appeal by a Ghanaian on death row, an official said Wednesday, one of several foreign drug convicts expected to face the firing squad soon.

Martin Anderson’s request for a judicial review was rejected on Tuesday, April 21, the same day the court dismissed an appeal by Serge Atlaoui, a Frenchman on death row, said a spokesman for the attorney-general’s office.

Anderson was sentenced to death by a Jakarta court in June 2004 for possessing 50 grams of heroin.

Death row convicts can pursue appeals in other courts – and several in the group facing execution are doing so – but they are seen as having little chance of success, and authorities say such efforts simply amount to condemned prisoners seeking to buy time.

“I give two thumbs up to the Supreme Court’s decision,” said spokesman Tony Spontana, referring to the rejection of Atlaoui’s and Anderson’s appeals.

Spontana said he hoped they would not try any other “maneuvers” to avoid their impending execution.

There is now only one convict, an Indonesian, in the group of drug offenders who still has an appeal outstanding at the Supreme Court, said Spontana, adding he hoped the legal bid would be rejected this week.

He said authorities would wait until a gathering of Asian and African leaders in Jakarta finishes on Friday before setting a date for the executions. (READ: Asia, Africa to mark summit that forged post-colonial path)

Jakarta originally said the group of 10, including 9 foreigners, would be put to death by firing squad at the same time in February, but following an international outcry it was agreed to let outstanding legal appeals run their course.

All the convicts recently lost appeals for presidential clemency, typically the final chance to avoid the firing squad.

If executed, Atlaoui would be the first French citizen to be put to death anywhere in the world for almost 40 years.

Foreign countries have been heaping pressure on Jakarta to change course on the executions but President Joko Widodo, who took office in October, has been a vocal supporter of the death penalty. – Rappler.com