Facebook Twitter Copy URL
Copied
In the draft statement for the summit, leaders will commit to 'undertake systematic efforts to identify, capture and destroy vessels before they are used by traffickers'

BRUSSELS, Belgium – EU leaders gathering in Brussels on Thursday, April 23, will consider launching a military operation against human traffickers in Libya in the biggest effort yet to halt the deadly flow of refugees trying to reach Europe by sea.

As survivors laid bare the full horror of last weekend’s catastrophic shipwreck near Libya, EU officials were paving the way for the approval of unprecedented action to ease their plight.

In the draft statement for the summit seen by Agence France-Presse, leaders will commit to “undertake systematic efforts to identify, capture and destroy vessels before they are used by traffickers.”

The EU’s top diplomat Federica Mogherini “is invited to immediately begin preparations for a possible security and defense policy operation to this effect, in accordance with international law,” the draft added.

A diplomatic source said EU members were preparing to approve the statement, reflecting the union’s readiness to take bolder action against people smugglers, who pack rickety boats to overflying with people fleeing conflict and hardship in Africa, the Middle East and Asia.

Italian Prime Minister Matteo Renzi on Monday, April 20, evoked the possibility of “targeted interventions” against the Libya-based smugglers that would fall short of a full military intervention.

“You can’t be serious about this problem if you don’t take Prime Minister Renzi’s proposals seriously, though you have to go through the legal and operational issues,” said a senior European official on the condition of anonymity.

If approved, the operation would be the first time EU governments used military force to fight illegal migration.

EU leaders go into Thursday’s summit under huge pressure to both check the tide of migrants landing on European shores and provide greater succor to those whose boats run into trouble at sea. 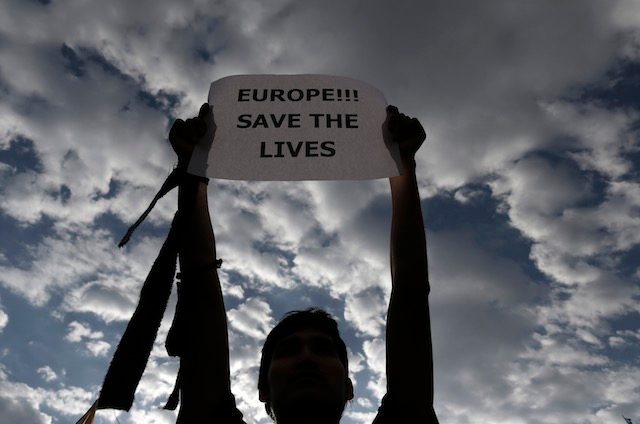 Turkish President Recep Tayyip Erdogan on Wednesday, April 22, contrasted his country’s hosting of two million refugees from Syria with the EU’s approach of “letting the boats sink and leaving them to their deaths”.

Erdogan’s remarks came 3 days after an estimated 800 migrants bound for Italy drowned when their boat capsized after setting sail from Libya.

The vast majority of the victims were locked in the hold or the middle deck of the 20-meter (66-foot) converted fishing boat when it collided with a Portuguese cargo ship responding to its distress signal.

One of the 28 survivors described nightmarish conditions on board.

“Those who had the least money were stuffed into the hold at the bottom, and locked inside,” a Bangladeshi teenager identified as Abdirizzak told Italy’s Corriere della Sera newspaper.

When the first collision happened in pitch darkness, scenes of pure terror ensued.

“Everyone was screaming, pushing, punching, elbowing – terrified. From below we could hear those who were locked in shouting ‘Help, Help!'”

Prosecutors in the Sicilian city of Catania said they had asked a judge to charge the boat’s Tunisian captain with illegal confinement as well as culpable homicide, causing a shipwreck and aiding illegal immigration.

The skipper, Mohammed Ali Malek, 27, is alleged to have been drinking and smoking hashish while steering the boat. A Syrian crew member Mahmud Bikhit, 25, is also in custody.

The exact number of victims may never be known as the wreck sank in one of the deepest parts of the Mediterranean.

A further 1,106 migrants landed on Italy’s shores Wednesday after being picked up at sea by the coastguard, bringing the total currently housed in reception centers around the country to 70,507, according to the Interior Ministry.

“We have to go to the root (of the problem) and discourage these men and women from leaving their countries,” Renzi told Italian parliament, naming Niger and Sudan as states where the EU could also intervene in collaboration with UN agencies.

“Fighting people trafficking means fighting the slave traders of the 21st century. It is not only a question of security and terrorism – it is about human dignity,” Renzi told deputies.

But experts question whether such action, modeled on Australia’s approach to its migrant crisis, could be done without UN authorization. (READ: Migrant crisis: Can EU learn from Australia?)

EU governments have already agreed to double the resources available to a maritime border patrol mission, but that has been attacked as too little, too late by refugee and rights groups.

Sunday’s disaster was the worst in a series of migrant shipwrecks that have claimed more than 1,750 lives this year – 30 times higher than the same period in 2014 – and nearly 5,000 since the start of last year.

If current trends continue, there could be 30,000 deaths at sea this year and Italy will have to process 200,000 migrants landing on its soil, according to projections by aid groups.

Italian officials believe there could be up to one million refugees from Syria, Eritrea and sub-Saharan Africa already in Libya hoping to board boats.

Other ideas up for discussion at the summit on Thursday include a pilot scheme to fast-track the return of migrants to their home countries and a program to expand the resettlement of refugees. – Alex Pigman, with Angus Mackinnon in Rome, Italy, AFP / Rappler.com