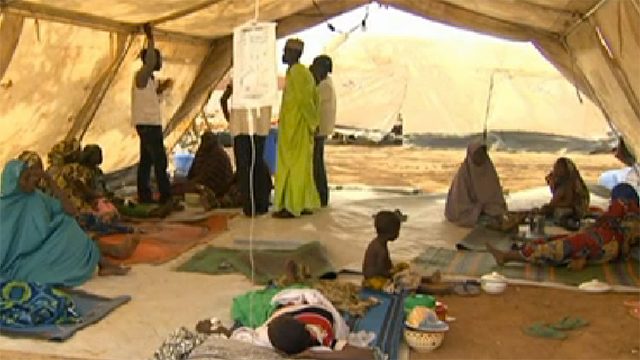 NIAMEY, Niger – Parents cradling sick children in their arms streamed into a treatment center in Niger’s capital Niamey, the victims of a meningitis epidemic that has claimed over 100 lives and appears to be accelerating.

The impact of the nationwide outbreak was also evident on the faces of the parents awaiting updates on their sons and daughters at the clinic, where tents have been erected to deal with the overflow of cases.

“My son has been fighting death for five days,” said Amadou Hassane, looking lost as he waited at the clinic in the Lazaret neighborhood.

Another father stared at an ambulance carrying away his three-year-old daughter killed by the infection.

“Allahu Akbar (God is greatest),” said Ali Moussa, 45, a farmer. “She was the third victim to die in a couple hours.”

The government said Friday that since January the epidemic has killed 129 people out of 1,150 cases as of Wednesday. Just three days earlier on Sunday officials reported 85 deaths and 908 cases.

A couple dozen victims had died of the disease by the end of March, but in April the number of infections accelerated into an epidemic.

The government has ordered all schools closed until next week in an effort to limit the spread of the deadly disease.

Several strains of the infection, which can be highly contagious, have been circulating in the landlocked nation of nearly 18 million in west Africa.

Relief workers said previously that there was a global shortage of vaccines against the disease, which can also be tackled with antibiotics if administered swiftly.

The spread of the disease seems to also have been accelerated by a warm, dry wind called harmattan that is blowing across the arid country. Dust is thought to be one of carriers of meningitis.

The sick have been flowing into the Lazaret clinic from all over the capital and its environs, said a worker at the treatment center.

“At first it was one or two dead per day, but lately it has gone up to 10 deaths,” he added.

At the clinic a three or four-year-old boy’s eyes rolled back in head while his grandmother rushed him in for treatment. A screaming teenage boy could barely walk and was being held upright by two men.

Niger, one of the world’s poorest countries, is prone to such epidemics because of its position in the “meningitis belt” that stretches from Senegal in the west to Ethiopia in the east, according to the World Health Organization (WHO).

Meningitis is an inflammation of membranes protecting the spinal cord and the brain, and the first symptoms include stiffness and severe headaches.

While nearly the entire country is impacted by the outbreak, the capital has been the hardest hit, authorities said. The clinic in the Lazaret neighborhood, is the main treatment site for victims, has been overwhelmed.

The rate of admission has shot to about 90 new cases per day, said Emmanuel Massar, a worker with Doctors Without Borders (MSF).

More than 600,000 doses of vaccine had arrived in Niger on Thursday, but another 600,000 are needed just to vaccinate the children between the ages of 2-14 in Niamey. – Boureima Hama, AFP/Rappler.com