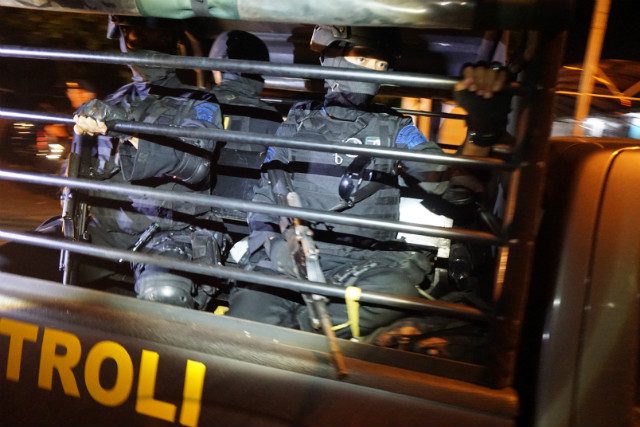 Facebook Twitter Copy URL
Copied
(UPDATED) Indonesian foreign ministry: 'We note the statement by the UN but we also note that there was no similar statement made when recently two Indonesians were executed' in Saudi Arabia

JAKARTA, Indonesia (UPDATED) – Indonesia on Sunday, April 26, signaled it was determined to push ahead with the execution of 8 foreign drug convicts, despite a growing wave of global condemnation led by United Nations chief Ban Ki-moon.

Authorities on Saturday, April 25, gave formal notice to the 8 – from Australia, Brazil, Nigeria and the Philippines – that they would be executed by firing squad imminently, along with an Indonesian prisoner.

However, a Frenchman also on death row for drug-related crimes was granted a temporary reprieve after Paris stepped up pressure on Jakarta.

The group have been moved to the high-security prison island of Nusakambangan, where Indonesia puts condemned prisoners to death, and Jakarta says the executions could be as early as Tuesday, April 28, although no official date has been set. (READ: Mary Jane told of execution date: Tuesday, April 28)

The convicts recently lost appeals for mercy to President Joko Widodo, who has taken a hard line against drug traffickers and refused to back down on the executions despite mounting international criticism.

The UN’s Ban added his voice to appeals for the convicts to be spared.

“The Secretary General urges President Joko Widodo to urgently consider declaring a moratorium on capital punishment in Indonesia, with a view toward abolition,” a spokesman for Ban said.

Australia, which has mounted a sustained diplomatic campaign to save its two citizens in the group, also renewed appeals following Saturday’s news.

“Nothing can be gained and much will be lost if these two young Australians are executed,” said Foreign Minister Julie Bishop.

“I again respectfully call on the president of Indonesia to reconsider his refusal to grant clemency. It is not too late for a change of heart.”

France has stepped up pressure on Jakarta in recent days, with President Francois Hollande warning of “consequences” if its citizen, Serge Atlaoui, is put to death.

The warning came shortly before it was announced that Atlaoui had won a temporary reprieve to allow him to pursue a further legal appeal.

Brazil vowed to press Indonesia not to execute the Brazilian man among the group, Rodrigo Gularte, for humanitarian reasons, saying that he suffers from schizophrenia. Despite the appeals, Indonesia has shown little sign that it is willing to back down and the foreign ministry indicated Sunday that Ban’s statement would not change their plans.

“We note the statement by the UN but we also note that there was no similar statement made when recently two Indonesians were executed,” ministry spokesman Arrmanatha Nasir told Agence France-Presse, referring to recent executions of Indonesian domestic workers in Saudi Arabia.

Executions were carried out recently “by other countries and we did not see any statement made by the UN,” he added.

He added that it was “not the intention of Indonesia” to damage bilateral ties with other countries.

The executions have been delayed for weeks, with Indonesia coming close to carrying them out in February, but then agreeing to let final legal appeals be resolved following an international outcry.

However Saturday’s announcement signals they are finally going ahead.

While Jakarta has not officially announced a date, lawyers for two of the convicts – the Filipina and one of the Nigerians – said they had been informed it would be on Tuesday.

Authorities have said that they are waiting on the outcome of the appeal by the sole Indonesian in the group, which could come as early as Monday, April 27.

Relatives of the condemned prisoners have been rushing to Cilacap, the town that serves as the gateway to Nusakambangan, as authorities informed the death row convicts they would face the firing squad soon.

The family of the Australians, heroin traffickers Andrew Chan and Myuran Sukumaran, arrived Saturday to visit the men, crossing over to Nusakambangan accompanied by embassy officials.

Relatives of Filipina Mary Jane Veloso, including her sons aged 6 and 12, visited her Saturday and again on Sunday while families of the Brazilian convict and one of the Nigerians also visited.

Veloso’s lawyer, Edre Olalia, said that her legal team had filed a request for a second judicial review of her case and that Indonesian authorities had promised to let all appeals run their course before the executions.

“We are not giving up, we will never give up,” Olalia told reporters in Cilacap, adding that Veloso was “an innocent mother”.

Philippine Vice President Jejomar Binay, who has spearheaded efforts to save Veloso, urged his country not to “lose hope” Sunday, noting her legal team had filed a second petition with Indonesia’s Supreme Court.

“We will continue to use all the avenues available to us,” he said.

Three of the African traffickers are confirmed as being from Nigeria. However it is not clear whether the fourth holds Ghanaian or Nigerian nationality.

Indonesia has some of the toughest anti-drugs laws in the world. In January, Jakarta executed 6 drug convicts, including 5 foreigners, sparking international outrage. – Arlina Arshad, AFP / Rappler.com