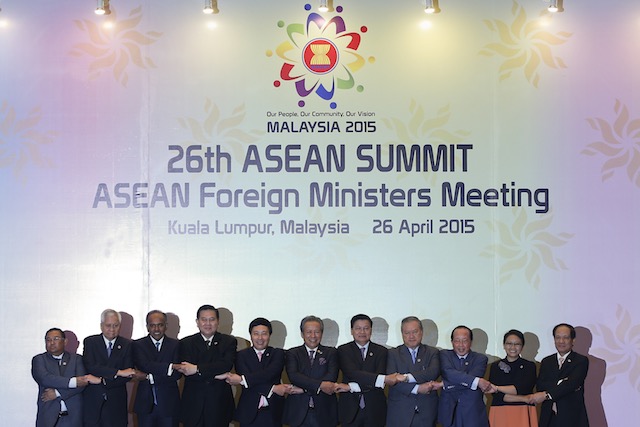 KUALA LUMPUR, Malaysia (2nd UPDATE) – Beijing is poised to take “de facto control” of the South China Sea, the Philippines warned Sunday, April 26, but its call for a robust Southeast Asian response at a regional summit was shot down.

Vietnam, the Philippines, Malaysia and Brunei claim parts of the strategic body of water, but Beijing claims nearly all of it, and its increasingly strident territorial assertions have caused concern in the region and beyond.

He singled out a campaign of land reclamation on disputed reefs that has raised the specter of permanent Chinese bases far out in the sea from which it can enforce its sovereignty.

‘Stand up for what is right’

“Is it not time for ASEAN to say to our northern neighbor that what it is doing is wrong and that the massive reclamations must be immediately stopped?” del Rosario asked his fellow ministers.

“Is it not time for ASEAN to finally stand up for what is right?”

But summit host Malaysia later rejected the idea of a response that could antagonize China.

“We must avoid any action that would be counter-productive and bring us further apart, either amongst ourselves, or with China,” Malaysian Foreign Minister Anifah Aman said.

Faced with Beijing’s immense trade and diplomatic leverage, ASEAN has a history of failing to agree on strong responses over the issue on behalf of its members with disputed maritime claims.

Concern over Chinese land reclamation was re-ignited this month by satellite photos showing huge amounts of sand being dredged and dumped onto fragile coral reefs claimed by the Philippines.

Defense analysts say some of the new islands will be big enough for airstrips and other large facilities, raising the specter of deepening Chinese domination of a waterway rich in energy reserves, fishery resources, and a vital conduit for much of world trade.

A draft statement prepared before the gathering calls for “self-restraint” at sea but avoids criticizing or even mentioning China by name, a diplomatic source said previously. (READ: China’s island-building to loom large at SE Asia summit)

Anifah said “ASEAN member-states want to see that this matter should be settled amicably”, and he suggested China someday allow joint use of the artificial islands.

ASEAN has pushed China for more than a decade to agree on a code of conduct at sea that would prevent rival claimants taking steps that could inflame the situation.

But actual discussions only started in 2013 and have progressed slowly, with analysts saying Beijing is delaying to buy more time to consolidate its foothold.

Del Rosario said China will likely complete its reclamation projects before ever agreeing to a code of conduct, which would be rendered “irrelevant.”

Philippine President Benigno Aquino III warned in a recent Agence France-Presse interview that Chinese actions “should engender fear for the rest of the world”, and could threaten freedom of navigation.

The satellite photos released by the Center for Strategic and International Studies showed a flotilla of Chinese vessels dredging sand onto a feature known as Mischief Reef in the Spratly Islands.

Other photos showed a runway and ship harbor taking shape on Fiery Cross, also in the Spratlys.

China has angrily rejected criticism, saying it can do as it pleases in waters that are its “indisputable” territory.

Malaysia police said they arrested on Sunday 12 Islamic militants planning attacks in Kuala Lumpur during the ASEAN meeting, seizing materials that could be used to make explosives.

Police did not make clear whether the planned attacks were specifically directed at the diplomatic gathering, but have warned of rising militant activity inspired by the Islamic State jihadists in Syria. – Martin Abbugao, AFP / Rappler.com