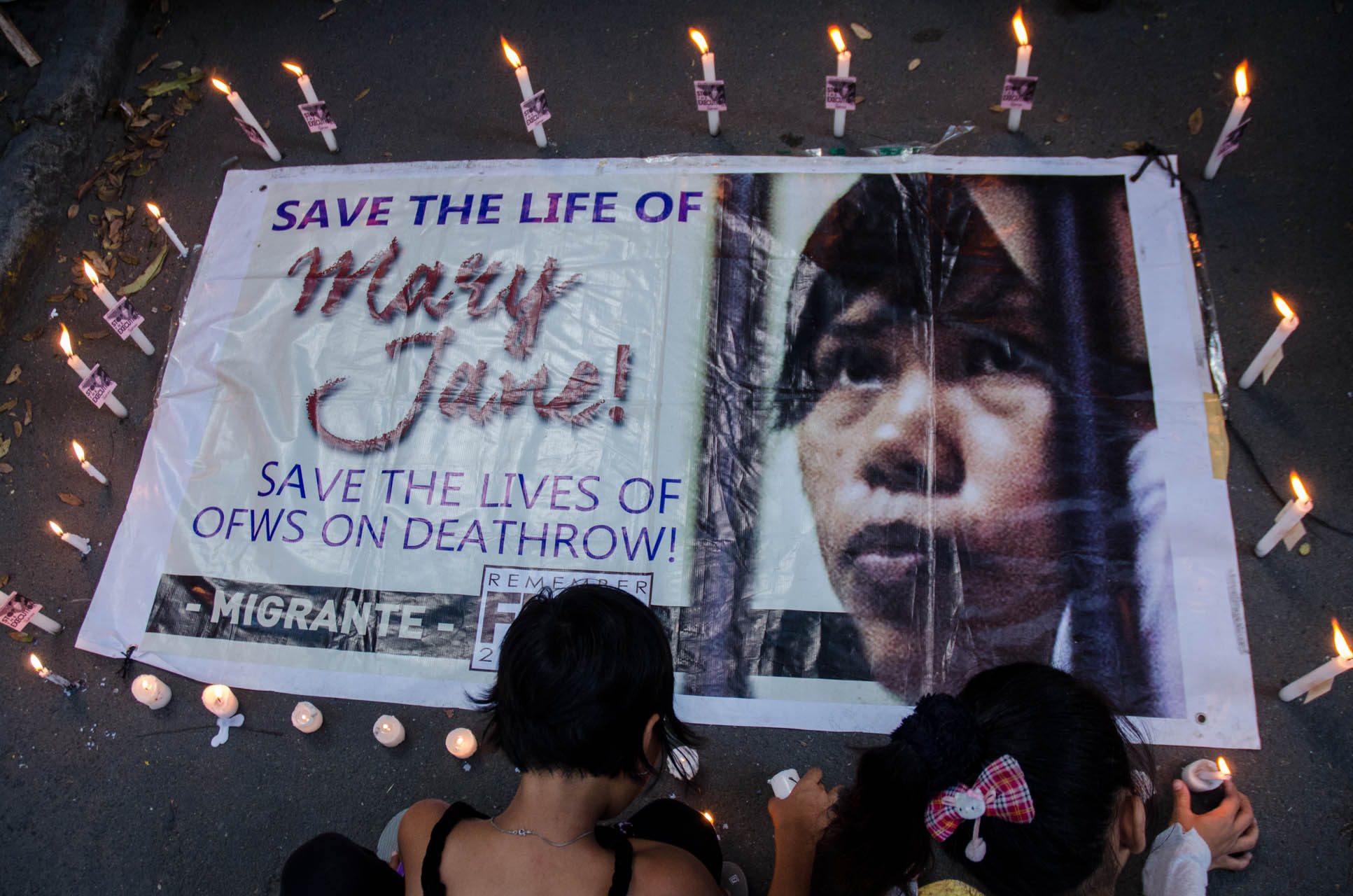 YOGYAKARTA, Indonesia (UPDATED) – After the dramatic 11th-hour stay of execution granted to Mary Jane Veloso, migrant worker groups say it’s now time to shift efforts from just saving her from the death penalty to bringing her back home to the Philippines.

Just minutes after the executions began early on Wednesday, April 29, Indonesia Attorney General H.M. Prasetyo announced that the 30-year-old Filipina mother of two was not included because of the surrender of her recruiter in the Philippines, Maria Kristina Sergio. (READ: Mary Jane execution delayed)

Given this, Migrante International chairperson Connie Bragas-Regalado said they are working to make sure Veloso is declared innocent.

“We first need to ensure that Kristina and Julius are convicted, and to find the Ike person who gave her the luggage and who’s believed to be in Malaysia,” she said.

Regalado added: “As of now we already have 3 witnesses against them (on illegal recruitment), and their affidavits have already been prepared, but we’re looking for more.  We’re looking for people she has actually recruited to establish their modus operandi.”

She said one of the potential witnesses, the live-in partner of a relative of Lacanilao, claims that the couple had also attempted to recruit her but she backed out after she saw on the news that her would-be employer in Malaysia had been arrested for drugs.

The Philippine Department of Justice (DOJ) has summoned Sergio, Lacanilao, and “Ike” to appear before Assistant Prosecutor Susan Alarcon on May 8 for the preliminary investigation on the case.

Regalado said it was important to monitor the case closely and keep up the pressure.

Meanwhile in Indonesia, lawyers are still not sure what the stay of execution means for Veloso’s case.

Indonesian lawyer Ismail Muhammad said they have to wait for the official statement of the prosecutors before they can determine the next steps.

Philippine embassy officials said Veloso left the maximum security Nusakambangan prison island early on Wednesday to be transferred back to Wirogunan Penitentiary in Yogyakarta, where she was incarcerated for 5 years before the weekend’s dramatic events.

Her family will visit her again in what is expected to be a joyful reunion after the tearful goodbyes the previous day.

Anis Hidayah, Executive Director Migrant Care-Indonesia  confirmed she was in a meeting with the Indonesian president on Tuesday – hours before the execution of 9 convicts, then including Veloso – on International Labor Day preparations, when the discussion eventually veered towards the Filipino convict.

“We told him that actually Mary Jane is the victim of human trafficking, [and] that also happened with Indonesian migrant workers abroad,” she said.

Hidayah said she cried as she illustrated to Widodo the situation of Veloso and similarly victimized Indonesian migrant workers abroad. She also told him that Veloso’s alleged recruiter had surrendered just that day, which would and this is expected to prove that Veloso “is a victim and not [a participant] in drug trafficking.”

“I was crying when I illustrated the case of Indonesian workers, the case of Mary Jane. I said to him, ‘Please, [if] we kill the victim, and then tomorrow or next time we will find the new evidence [on Veloso]. How can we [be] responsible for this, after the execution?’” she recalled telling Widodo.

Hidayah said she apprised Widodo on the “vulnerability of migrant worker from Indonesia, from the Philippines or other countries to become victims of syndicates of drug smuggling” and appealed for a review Veloso’s case and a delayed execution.

Asked how Widodo initially responded to her plea, Hidayah said that after listening to all the information, his first response was that he was “worried that there will be many people [who will] make a testimony that they are victims” of Sergio.

Hidayah said that after their meeting, she learned about the new lobby of Philippine President Benigno Aquino III with the Indonesian government to spare Veloso’s life. (READ: Aquino to Indonesia: Make Mary Jane state witness)

Widodo later called for an emergency meeting with key Indonesian authorities on Veloso.

Hidayah agreed with the view that the decision to delay the execution of Veloso was a product of an international, multisectoral initiative to save the Filipino death convict.

“Many movements to save Mary Jane happened in Indonesia, in Manila, in several countries to make mass demonstrations, to send open letters to the President, also to make a lobby with Indonesian authorities and the President,” she said.

Hidayah especially cited the social media campaign to save Veloso, which generated more support for the effort beyond Indonesia and the Philippines. – Rappler.com