Facebook Twitter Copy URL
Copied
As the death toll passes 5,489, the government acknowledges that it is overwhelmed by the scale of the crisis

KATHMANDU, Nepal – The United Nations launched a $415-million appeal for survivors of Nepal’s massive earthquake, as coordinators warned Thursday, April 30, that it might take a 5-day trek to deliver relief supplies to some of the worst-hit rural areas.

After desperate Nepalis clashed with riot police and seized supplies of bottled water in the capital Kathmandu, the government acknowledged that it had been overwhelmed by the scale of the crisis.

The death toll passed 5,489 while more than 10,000 people have been injured, according to official assessments.

The exact extent of the damage in far-flung rural areas was yet to become clear with relief coordinators warning that the vast size and lack of roads in the Himalayan nation would complicate efforts to reach victims.

President Barack Obama promised the United States will do “all it can” to aid the relief effort as he offered his deepest condolences for the tragedy to Nepal’s Prime Minister Sushil Koirala, the White House said.

Launching its appeal for $415 million in aid, the United Nations said it would be take a marathon effort to help the people of what is one of Asia’s poorest countries.

“This will be a long drawn-out affair. It will be a 3-month exercise to address the relief needs, then it will turn into a recovery process and a reconstruction process,” said UN resident coordinator for Nepal, Jamie McGoldrick.

The UN said there were “significant logistical challenges” in responding to such a large-scale crisis in hard-to-reach, mountainous areas.

Many of the communities worst affected by Saturday’s (April 25) quake – the biggest to hit Nepal in over 80 years – are in remote areas of the Himalayas that rescuers have not been able to reach.

Only accessible by foot

In its latest situation report, the UN said that search and rescue (SAR) was still limited outside of the Kathmandu Valley.

“Some villages can only be reached by foot with some areas taking up to 4 to 5 days to reach. Fuel to transport SAR teams is limited,” it said.

“There is a need to prioritize restoration of communications infrastructure, casualty management and basic relief in remote areas.”

The latest official toll from Nepal’s National Emergency Operation Centre put the number of dead at 5,489 and more than 10,000 are known to have been injured.

The impact also caused death and destruction in neighboring countries such as India and China where more than 100 people were killed. 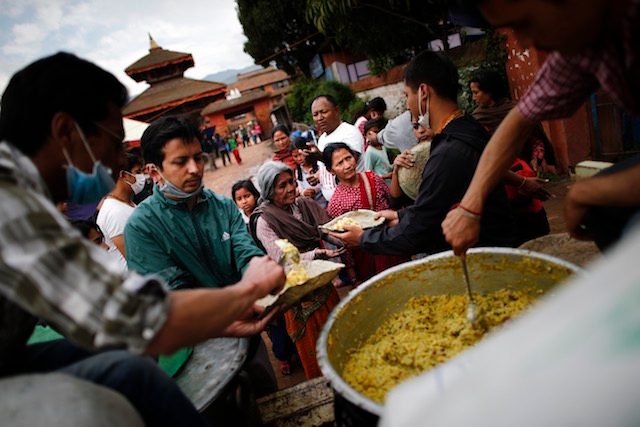 Although the number of aftershocks since Saturday’s quake has subsided, fresh tremors were felt in the capital Kathmandu overnight.

Some people who had spent the past 4 nights camped out in the open for fear of aftershocks spent their first night back home.

But a significant number are still living on the roadside or open ground, according to Agence France-Presse correspondents in the ruined capital, which is normally home to some 2.5 million people, including many migrant workers.

“I don’t know how long we are going to do this. How long can we live on the street?” said Rajina Maharjan after another night camped out in a tent outside her house with her husband, in laws and a 4-year-old son.

“We might return home in a few days, see how we can fix it and feel safe it in. It is raining on and off, we have old people and a child to take care of,” added Maharjan, a shopkeeper.

Hundreds of thousands of residents have however fled the city since Saturday, fearing aftershocks and wanting to inspect the damage back in their families’ villages.

Signs of normal life were returning Thursday to Kathmandu, with shopkeepers opening, some for their first time since the quake, and vegetable vendors laying out bags of produce before dawn at devastated Durbar square.

Riot police battled to contain the huge queues of people trying to get on long-haul buses on Wednesday, April 29, that the government had promised to lay on.

Many complained that only a fraction of the buses actually arrived.

When the buses failed to materialize, anger began surging and scuffles broke out between the crowds and riot police close to parliament.

Some protesters forced a truck carrying drinking water off the road and climbed on top of it, throwing the bottles to the crowd.

The government acknowledged it had been overwhelmed by the devastation from the quake.

“There have been some weaknesses in managing the relief operation,” Communications Minister Minendra Rijal told Nepal’s Kantipur Television.

“The disaster has been so huge and unprecedented that we have not been in a position to meet the expectations of the needy people. But we are ready to accept our weakness, learn and move ahead in the best way possible.” – Paavan Mathema, AFP / Rappler.com