One week on, Nepal rules out finding more quake survivors 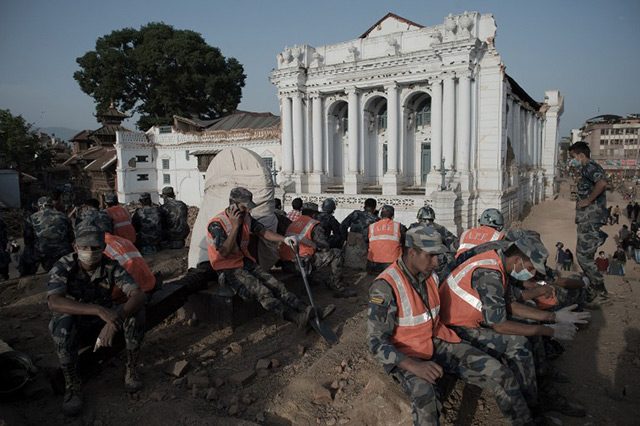 KATHMANDU, Nepal – Nepal ruled out the possibility on Saturday, May 2, of finding more survivors buried in the rubble from a massive earthquake that killed more than 6,700 people and devastated vast swathes of one of Asia’s poorest countries.

One week on from Nepal’s deadliest quake in over 80 years, hopes of detecting more signs of life among the ruins of the capital Kathmandu had all but disappeared, and the focus was shifting to reaching survivors in far-flung areas who have yet to receive relief supplies.

The UN children’s fund UNICEF warned of a race against time to avert an outbreak of disease among the 1.7 million youngsters estimated to be living in the worst-hit areas, with monsoon rains just a few weeks away.

The 7.8-magnitude quake wreaked a trail of death and destruction when it erupted around midday last Saturday, reducing much of Kathmandu to rubble and even triggering a deadly avalanche on Mount Everest. (READ: Key facts about the Nepal quake)

“It has already been one week since the disaster,” home ministry spokesman Laxmi Prasad Dhakal told Agence France-Presse (AFP).

“We are trying our best in rescue and relief work but now I don’t think that there is any possibility of survivors under the rubble.”

While multiple teams of rescuers from more than 20 countries have been using sniffer dogs and heat-seeking equipment to find survivors in the rubble, no one has been pulled alive since Thursday evening.

More than 100 people were also killed in neighboring India and China.

The exact scale of the disaster was still to emerge, with the mountainous terrain in the vast Himalayan nation complicating the relief effort.

The numbers of foreigners who have died was also unclear with around 1,000 EU citizens still unaccounted for in Nepal, according to diplomats.

The Europeans had mostly been climbing in the Everest region or trekking in the remote Langtang range in the Himalayas near the quake epicentre.

“They are missing but we don’t know what their status is,” EU ambassador to Nepal Rensje Teerink told reporters, confirming that 12 EU citizens are known to have died so far.

Another EU official said on condition of anonymity that the majority were likely to be found safe, but given the difficulty of the terrain and poor communications, their whereabouts were currently unknown.

Rameshwor Dangal, joint secretary of Nepal’s National Disaster Management Division, said many people were waiting to either receive emergency aid supplies or else be airlifted to safety.

“In many areas people are not getting relief and it is natural that they are unhappy about it,” he told AFP.

“We estimate that there may still be around 1,000 people in Sindhupalchowk and Rasuwa areas who need to be rescued. This includes the injured and the stranded people, including the foreigners.”

“Almost every house in my village is destroyed, and 20 people died. We lost our cattle and our sheep,” said Kumar Ghorasainee, amid the ruins of his hometown of Melamchi.

The 33-year-old English teacher said the school had collapsed and there was nowhere for the children to go.

“No one has come to help us – the cars and the aid trucks just drive by… How will we manage now?”

In Melamchi, shops and restaurants were closed and streets were mainly deserted.

In nearby rice-farming communities, almost all the houses had been so severely damaged that they were no longer habitable, and locals were sleeping in makeshift tents.

The Nepalese government has acknowledged being overwhelmed but the UN’s humanitarian chief defended its performance.

“The scale and devastation wreaked by the earthquake and the aftershocks would have challenged any government,” Valerie Amos said on Friday.

UNICEF said the health and wellbeing of children affected by the disaster were “hanging in the balance” as so many had been left homeless, in deep shock and with no access to basic care.

“Hospitals are overflowing, water is scarce, bodies are still buried under the rubble and people are still sleeping in the open. This is a perfect breeding ground for diseases,” said Rownak Khan, UNICEF’s deputy representative in Nepal.

“We have a small window of time to put in place measures that will keep earthquake-affected children safe from infectious disease outbreaks, a danger that would be exacerbated by the wet and muddy conditions brought on with the rains,” added Khan. – Bhuvan Bagga, Agence France-Presse/Rappler.com