Quake-hit Nepal villagers take aid into their own hands 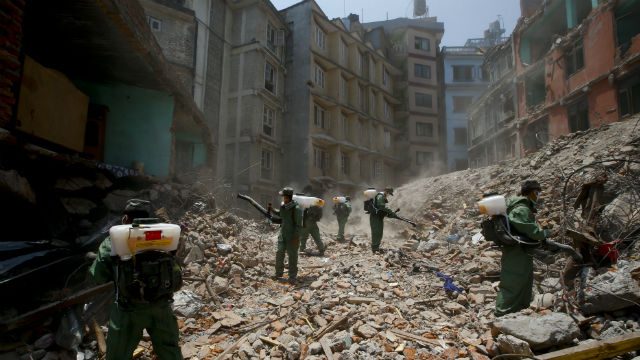 Facebook Twitter Copy URL
Copied
Although the army has begun airlifting relief supplies to Barpak, the villagers say they are desperately short of tents and tarpaulins as the season for monsoon rains approaches

BARPAK, Nepal – Even as they mourn their dead, the quake-hit villagers of Barpak high in the Nepal Himalayas must make a difficult and dangerous hours-long trek into the valley for tents and supplies.

More than a week after a deadly earthquake flattened their village, many survivors in this small mountain community still lack adequate shelter from the cold and rain.

Although the army has begun airlifting relief supplies to Barpak, the villagers say they are desperately short of tents and tarpaulins as the season for monsoon rains approaches.

“Relief materials are coming but only a little, not much,” said 21-year-old Prem Gurung, who was in Kathmandu when the quake hit but has returned to his devastated native village to help.

“There are a lot of people there, so even if people bring a lot of things, they don’t get much.”

Instead, the villagers are forced to haul tarpaulins and basic food supplies on foot up the vertiginous rock-strewn path from the valley — an eight-hour round trip.

Along the way they are at risk of rockfalls and landslides caused by the regular aftershocks that have shaken Nepal since the 7.8-magnitude quake struck on April 25.

The quake killed more 7,600 people and injured another 16,390 across the country, according to the Nepal Emergency Operation Centre.

When Agence France-Presse visited Barpak this week, mourning rituals in the deeply traditional community were still under way.

The quake killed 65 people and left just a handful of homes standing in the village of around 5,000 people 160 kilometres (100 miles) northwest of Kathmandu.

“In Kathmandu there were a lot of deaths but relatively little damage given the size of the city,” said Julien Argenone, a French doctor working as a volunteer in Barpak.

“Here by contrast the valley has been very hard hit. Everything is completely destroyed and they need everything, they need shelter before the monsoon.”

Some have taken shelter in the village school, one of the few buildings still standing, while others are crammed under the few tents and tarpaulins the village has received.

Nepal’s government has given out around 50,000 tarpaulins, according to UN figures, but desperately needs more tents with just weeks until the monsoon rains are due.

Buddhi Samsher Ghale, a soldier with the British Gurkhas who is originally from Barpak, took leave from the army to come home and help his devastated family after the quake, which killed his grandparents and niece.

It took him four days to get back to Nepal because Kathmandu’s sole runway was so clogged with flights bringing aid from around the world.

But he says relatively little of that aid has so far reached his community.

“The biggest problem is access to aid,” he told Agence France-Presse in Barpak.

“Aid is coming into Kathmandu, Pokhara, but to get it from there is our biggest challenge.

“Because there’s no road, it would take about four or five hours’ walk, carrying heavy loads and the path is dangerous.” – Rappler.com