May 11, 2015 1:11 PM PHT
Agence France-Presse
Facebook Twitter Copy URL
Copied
The UN considers the Rohingya to be one of the world's most persecuted minorities 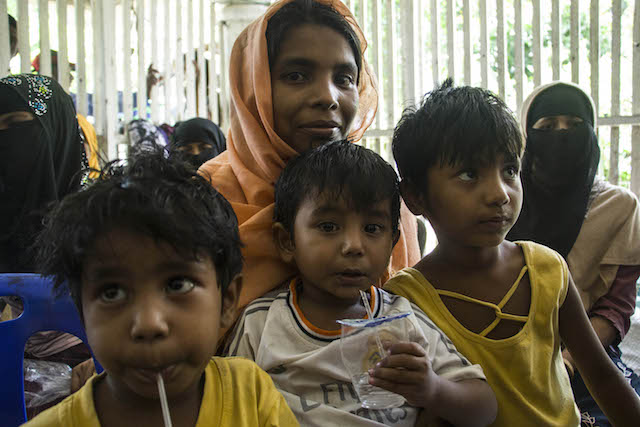 JAKARTA, Indonesia – Four boats carrying some 1,400 Rohingya migrants were rescued off the coasts of Indonesia and Malaysia on Monday, officials said, a day after nearly 600 others arrived in a wooden vessel off Indonesia’s Aceh.

All the boats appear to have been abandoned as Thailand, their usual destination, cracks down on the trafficking of ethnic Rohingya Muslims bound for neighbouring countries, after the discovery of dozens of remains in mass graves at “slave camps” in the Thai south.

More than 1,000 migrants from Bangladesh and Myanmar landed in Malaysia after being dumped by human traffickers in shallow waters off the resort island of Langkawi, police said.

“We think there were three boats that ferried 1,018 migrants,” said Langkawi deputy police chief Jamil Ahmed, adding that the number was expected to grow as more migrants are picked up around the island.

In the early hours of Monday, Indonesian search and rescue teams discovered another boat drifting off east Aceh with 400 men, women and children from Myanmar and Bangladesh aboard, Aceh provincial search and rescue chief Budiawan told AFP.

Authorities are bracing for further arrivals and have recruited fishermen to assist in patrolling the coast of the remote western Indonesian province.

“We are on standby and ready to rescue them when we receive an alert,” Budiawan said.

Buddhist-majority Myanmar views its population of roughly 800,000 Rohingya as illegal Bangladeshi immigrants, and they have been targeted in outbreaks of sectarian violence there in recent years, prompting many to flee.

Thousands have braved the dangerous sea crossing from Myanmar to southern Thailand and beyond in the hope of reaching mainly Muslim Malaysia, but many often fall prey to people-traffickers in Thailand.

Chris Lewa from The Arakan Project, a Rohingya rights group, said she believes thousands of migrants are trapped at sea following crackdowns on trafficking in Thailand as well as in Malaysia in recent months.

“Thailand has tried to prevent traffickers from continuing their business so that has forced them to go somewhere else,” she told AFP.

“Brokers have been using ships as a camp.

“They’re just trying to disembark before they die,” she said of migrants perishing on boats without food, adding she expected many more to appear on Indonesian shores.

Boatloads of Rohingya have arrived off Aceh in the past, typically after becoming lost or running out of fuel.

But Indonesian officials said the first group which arrived near a beach in north Aceh early Sunday were tricked and told to swim to land.

“One of the migrants who could speak Malay told me that their agent had told them they were in Malaysia, and to swim to shore,” Darsa, a disaster management agency official who like many Indonesians goes by one name, told AFP.

Indonesian authorities on Monday revised the number of migrants aboard the first boat which arrived in north Aceh at the weekend to 573, from an initial figure of around 500.

“This number could get bigger as we are still processing the data,” north Aceh police chief Achmadi told AFP.

Darsa said there were 83 women and 41 children on board. One of the women was pregnant and some of the children were aged under 10.

“Some of them were not doing too well and needed medical attention,” he said.

One Muslim Rohingya aboard that vessel told journalists in north Aceh that the group had boarded the boat in Thailand and were heading to Malaysia before the traffickers abandoned them at sea with little fuel.

Achmadi said many of those brought to shore complained of hunger and illness and were taken to clinics for treatment.

The bulk of those migrants were being kept at a sports centre, but others are staying in the homes of local residents, he added.

The boatload that arrived in east Aceh early Monday was also receiving food and medical care as immigration authorities begin processing their cases.

The UN considers the Rohingya to be one of the world’s most persecuted minorities. – Rappler.com