Burundi coup defeated, but troubles far from over Facebook Twitter Copy URL
Copied
There are fears that post-coup Burundi could slide into a cycle of vicious reprisals against anyone linked to the coup, brought upon by President Nkurunziza's controversial bid to seek a third term

BUJUMBURA, Burundi – Burundi’s President Pierre Nkurunziza was in a confident, defiant mood as his motorcade rolled back into the capital Bujumbura following a failed coup, cheered by supporters and safely under the watch of loyalist troops who fought off the uprising.

With the plotters in detention or on the run, state radio still broadcasting the government message, and independent media silenced, there was little doubt of who was in charge after two days of uncertainty.

The president was also quick to order the opposition and activists to admit defeat and end their protests against his controversial bid to stand for a third consecutive term in office. 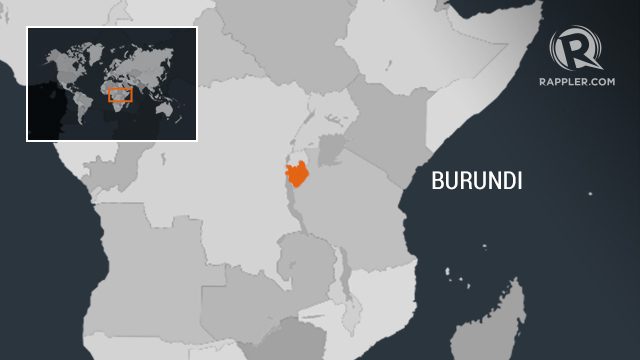 Analysts and observers, however, say the crisis in the small central African nation is not over yet, with the underlying cause – Nkurunziza’s determination to cling to power at all costs – still unresolved.

“The Burundi crisis is not over with the failure of the coup. Many Burundians are scared and continue to leave the country as fast as they can,” said Thierry Vircoulon of the International Crisis Group (ICG), a conflict prevention think-tank.

According to the United Nations, at least 100,000 people have fled the country, fearing their homeland could be plunged back into civil war less than 10 years after the last conflict ended.

“They are worried by increasing authoritarianism that marked the president’s second mandate, by the lack of social services and economic development, as well as by rising corruption,” Vircoulon said. “Nkurunziza should acknowledge that the country is in trouble and unity needs to be restored.”

Instead, however, Nkurunziza wants to press ahead with elections – seemingly confident that he now has the momentum.

“The president wishes to organize the elections as soon as possible, but attempting to do so will only contribute to worsening the situation,” Vircoulon said. “The holding of acceptably free and fair elections is now impossible.”

Still on the brink

There are fears that post-coup Burundi could slide into a cycle of vicious reprisals against anyone linked to the coup, including members of the army and police, protest organizers and journalists with independent media. Media rights activist have already complained of intimidation.

“How matters are resolved in the coming days and weeks will determine the country’s path for a long time to come,” said Yolande Bouka of the Institute for Security Studies (ISS).

“Weeks of protests and two days of intense fighting in the capital Bujumbura have shaken stability in the country,” the ISS said. “Even if pro-government elements of the army have regained control, the unity of the Burundian armed forces has been shattered. The population too is heavily divided over whether or not the president should run for a third term.” (READ: Top Burundi general launches coup attempt against president)

Amnesty International’s Sarah Jackson also said the country was on “the brink of a human rights crisis with potentially irreversible consequences for the region.”

While Nkurunziza has said those coup soldiers who surrender will be forgiven, that may not be enough to calm fears.

“Past experience in Burundi raises serious concerns regarding an escalation of repression and the fate of those of who have surrendered,” Vircoulon said.

Although the coup was condemned internationally, major regional and global powers have also been vocal in their criticism of Nkurunziza’s bid to stay put – and the country will be isolated as long as he refuses to compromise.

Opponents say Nkurunziza’s bid to seek a third term is an unconstitutional violation of the Arusha agreement that established a fragile power-sharing balance to end the 1993-2006 civil war that pitted the then Tutsi-dominated army against Hutu rebels.

African Union Commission chief Nkosazana Dlamini-Zuma has called for all sides to “end all acts of violence and intimidation, respect fundamental human rights and freedoms, and engage in a genuine dialogue which will contribute to peace and stability.” – Rappler.com