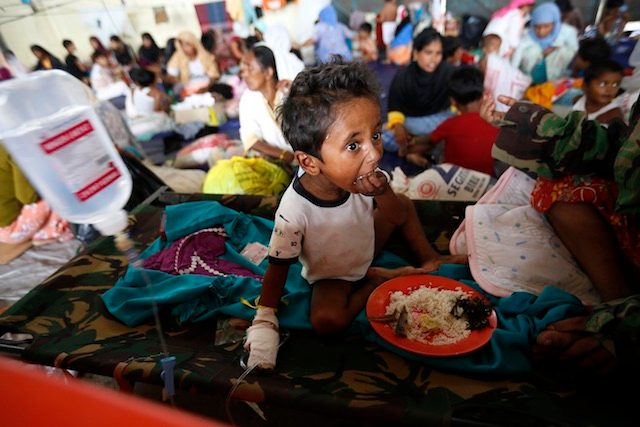 YANGON, Myanmar – Muslim boatpeople fleeing dire conditions in Myanmar are entitled to “human rights”, a spokesman for Aung San Suu Kyi’s opposition urged Monday, May 18, in strikingly bold comments on the group who are deeply marginalized in the Buddhist-majority nation.

The plight of the Muslim Rohingya from Myanmar has been thrust into the international spotlight as thousands of desperate migrants from the country – alongside economic migrants from neighboring Bangladesh – have swum or been rescued off the coasts of Indonesia, Malaysia and Thailand in recent days.

Suu Kyi has faced criticism for not speaking strongly on the issue, as surging Buddhist nationalism has deepened the desperation of a group largely viewed as illegal immigrants from Bangladesh.

But her party spokesman took the highly unusual step Monday of urging Myanmar to give stateless Muslims in the country a chance to get citizenship.

“If they are not accepted (as citizens), they cannot just be sent onto rivers. Can’t be pushed out to sea. They are humans. I just see them as humans who are entitled to human rights,” Nyan Win told reporters on the sidelines of a meeting between political parties and President Thein Sein in Yangon.

Myanmar’s estimated 1.3 million Rohingya are not accepted as an ethnic group and most are denied citizenship. They have long been subjected to daily prejudice and a raft of severe restrictions such as controls on movement and family size.

The violence was the catalyst for a huge exodus of migrants across the Bay of Bengal, with thousands taking to makeshift boats heading for Thailand, Malaysia and beyond. – Rappler.com