May 20, 2015 9:31 AM PHT
Nurdin Hasan
Facebook Twitter Copy URL
Copied
(5th UPDATE) The rescued boat was the vessel that went missing more than 3 days ago after being turned away by Thai authorities 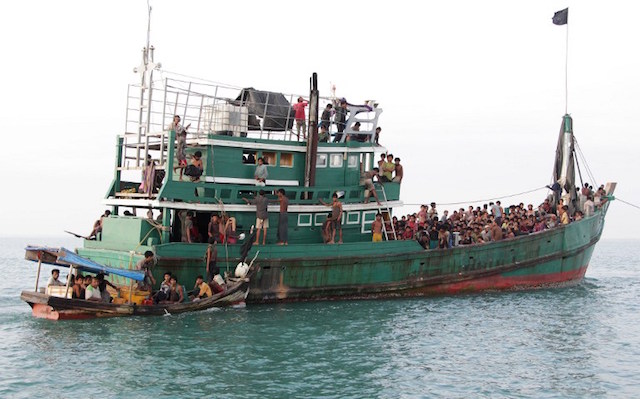 BANDA ACEH, Indonesia (5th UPDATE) – Search and rescue officials said that 433 migrants, believed to be from Myanmar, had been rescued from two different boats off Aceh’s coast in the early hours.

The first batch of 102 were brought to shore at 2 am (1900 GMT Tuesday) and taken to a village in East Aceh district, said search and rescue agency official Khairul Nova.

The second batch were found in their boat about 65 kilometers off the coast and were brought to a port in the Julok area of East Aceh district a few hours later, said another official, Sadikin.

“They found the boat bobbing about, the engine was dead, the fishermen felt pity for them,” he told AFP.

In total, information gathered by Rappler showed there were 341 men, 44 women, and 46 children rescued.

Teuku Nyak Idrus, the head of a local fishing community, recounted that they saw the wooden boat with hundreds of people in weak condition stranded near Kuala Julok, in East Aceh, at around 2 am.

“The fishermen who saw them immediately called for help to transport them on fishing boats (to land),” Idrus told Rappler.

As of 8 am local time, the evacuation process was still ongoing, he said.

Idrus added that most of the boatpeople were very weak, presumably after going with little or no food and drink for days.

A medical team is already on the site to provide treatment, and many were found to be suffering from dehydration.

“I am currently collecting fish from the fishermen and rice from residents to cook them,” Idrus added.

They have also distributed clothes to the boatpeople.

“Many of them didn’t even have clothes on when they were brought here,” he said, adding that they believed many others on the boat had died at sea. (READ: Desperate scenes in Rohingya, Bangladeshi migrant boat rescued off Indonesia) 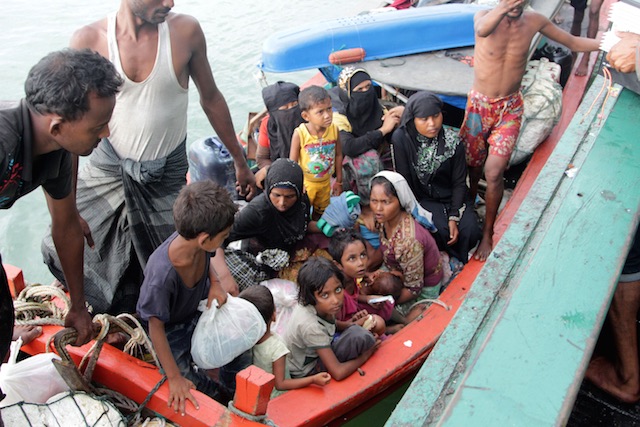 Turned away by Thailand

The migrant boat was the vessel that went missing more than 3 days ago after being spotted off Thailand, AFP journalists said.

The Thai authorities turned the boat away from Thai waters, insisting it wanted to travel to Malaysia. Fears had been growing for those on board after contact was lost with the vessel late Saturday.

Chris Lewa, from the Arakan Project, which monitors migrant journeys across the Bay of Bengal, said her group had also confirmed it was the boat.

“Our researchers in Aceh have confirmed it’s the same boat,” she said.

Acehnese fishermen have continued coming to the aid of the boatpeople despite the Indonesian military warning them not to do so. (READ: Indonesian support for Rohingya grows, but gov’t firm on rejection)

On Sunday, the Indonesian navy stopped another boat from entering its waters after the vessel was spotted heading across the Malacca Strait from the direction of Malaysia.

This latest batch of rescued boatpeople adds to the 1,346 Muslim Rohingya from Myanmar, fleeing persecution, and Bangladeshis, seeking to escape grinding poverty, that have already arrived in Aceh in recent days after being abandoned by people smugglers.

They are among several thousands who have made it to land in Indonesia, Malaysia and Thailand after being dumped by smugglers following the disruption of long-established human-trafficking routes.

But in a positive development, Malaysia and Indonesia said on Wednesday they would no longer turn away migrant vessels, responding to world pressure by offering to take in a wave of boatpeople provided that they could be resettled or repatriated within a year.

“The towing and the shooing (away of boats) is not going to happen,” Malaysian Foreign Minister Anifah Aman said at a joint press conference with his Indonesian counterpart Retno Marsudi after talks on the issue.

“We also agreed to offer them temporary shelter provided that the resettlement and repatriation process will be done in one year by the international community,” Anifah said.

The UN’s refugee agency told AFP on Tuesday it had received reports that at least 2,000 migrants had been stranded on at least 5 boats controlled by human-traffickers near the Myanmar-Bangladesh coasts for more than 40 days.

Traffickers were holding the people captive on boats amid “food shortages, dehydration and violence” unless they paid for their release, a spokeswoman for the UN High Commissioner for Refugees (UNHCR) said. (READ: Rohingya, Bangladeshi migrants describe carnage over food)

The agency has said a total of nearly 4,000 people from Myanmar and Bangladesh may be stranded at sea. – with reports from Agence France-Presse/Rappler.com