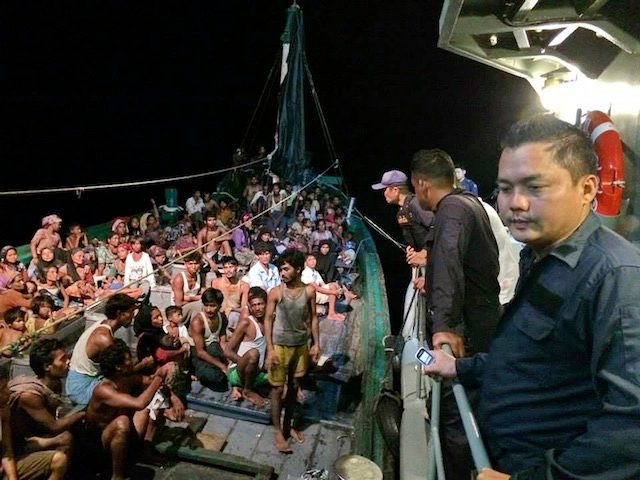 BANDA ACEH, Indonesia (2nd UPDATE) – Hundreds of starving boatpeople were rescued off Indonesia on Wednesday, May 20, as Myanmar for the first time offered to help ease a regional migrant crisis blamed in part on its treatment of the ethnic Rohingya minority.

The change of tune from Naypyidaw came as the foreign ministers of Malaysia, Indonesia and Thailand – facing global criticism for turning away rickety boats packed with starving migrants – gathered for talks on the issue near Kuala Lumpur.

Following appeals by UN chief Ban Ki-moon and Washington last week for the Rohingya and Bangladeshi migrants to be rescued, Pope Francis issued his first comments on the issue Tuesday, likening the plight of the “poor Rohingya” to that of Christian and ethnic Yazidi people brutalized by the Islamic State (ISIS) group.

Around 3,000 boatpeople already have swum to shore or been rescued off Malaysia, Indonesia and Thailand over the past 10 days after a Thai crackdown disrupted long-established smuggling routes, prompting some of the gangs responsible to abandon their human cargo at sea.

A total of 426 migrants believed to be from Myanmar were rescued in the early hours of Wednesday off Aceh in Indonesia, local officials said.

“Their condition is very weak. Many are sick, they told me that some of their friends died from starvation,” said Teuku Nyak Idrus, a local fishermen involved in the rescue.

Those saved in the Malacca Strait between Malaysia and Indonesia’s huge Sumatra island included 30 children and 26 women, he added.

With food and water supplies running low, some boats have drifted back and forth as Indonesia, Malaysia and Thailand refused to accept them, drawing international condemnation.

Myanmar also has come growing pressure to help stem the outflow of Muslim Rohingya, who are fleeing their homes in the country’s western Rakhine state after years of violence and discrimination at the hands of the Buddhist majority. Most head for Muslim-majority Malaysia.

Myanmar state media quoted a foreign ministry statement on Wednesday saying the government “shares concerns” expressed by the international community and is “ready to provide humanitarian assistance to anyone who suffered in the sea”.

That marked the most conciliatory statement yet from the Myanmar government, which considers Rohingya to be foreigners from neighboring Bangladesh and disavows all responsibility for them.

Myanmar has previously said it may snub Thailand’s call for a regional summit on the issue, and was not present at Wednesday’s meeting of foreign ministers in Malaysia.

In a mass at the Vatican, Pope Francis compared the Rohingya to those victimized in the Islamic State group’s brutal jihad in Syria and Iraq.

“We think of the poor Rohingya of Myanmar. As they leave their land to escape persecution they do not know what will happen to them,” he said.

The UN’s refugee agency told Agence France-Presse on Tuesday it had received reports that at least 2,000 migrants had been stranded at sea for weeks on boats near the Myanmar-Bangladesh coasts.

They are being held on board amid horrid conditions by human-traffickers who are demanding payment from the passengers to release them, a spokeswoman said.

The UN’s human rights and refugee chiefs have called on all three countries to launch search-and-rescue operations, bring boatpeople to land and begin procedures for assessing any refugee claims.

Anifah called Sunday, May 17, on Myanmar to engage in talks on the crisis, warning the Malaysia may use its power as this year’s chair of the 10-country Association of Southeast Asian Nations – to which Myanmar also belongs – to call an emergency regional meeting on the issue.

While many Rohingya flee systematic persecution in Myanmar, the Bangladeshis are believed to be mainly economic migrants. – Nurdin Hasan, AFP / Rappler.com