May 24, 2015 4:23 PM PHT
Agence France-Presse
Facebook Twitter Copy URL
Copied
(UPDATED) Under the legislation, local authorities can survey their regions to determine if 'resources are unbalanced because of a high number of migrants in the area, a high population growth rate and a high birth rate' 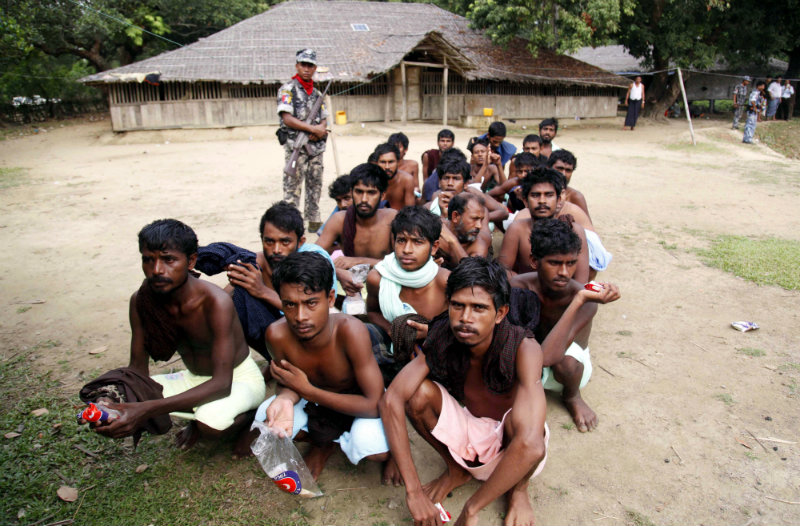 YANGON, Myanmar – (UPDATED) Myanmar has enacted a population law that rights groups said Sunday, May 24, 2015, targets persecuted Rohingya Muslims, a minority group at the center of a migration crisis that has seen thousands flee the country.

Desperate Rohingya, together with Bangladeshi migrants, have been rescued on Southeast Asian shores after harrowing boat journeys since a Thai crackdown on human-trafficking in early May threw the long-standing trade into chaos.

Tens of thousands of Rohingya have fled Myanmar in recent years, to escape sectarian violence as well as suffocating restrictions preventing travel and employment.

The new Myanmar legislation would allow regional governments to introduce family planning regulations to lower birth rates in their states.

The state-run Myanma Alinn newspaper reported on Saturday that President Thein Sein approved the law on May 19.

Under the legislation, local authorities can survey their regions to determine if “resources are unbalanced because of a high number of migrants in the area, a high population growth rate and a high birth rate,” it said.

They can then ask the central government to impose laws making it compulsory for women to wait “at least 36 months” after giving birth before having another child, Myanma Alinn said.

The consequences for breaking the birth-spacing rules are unclear.

Human Rights Watch said the new law clearly targets Muslim Rohingyas who live in Myanmar’s western Rakhine state, where they are not recognized as citizens and instead referred to as “Bengalis” or illegal immigrants from Bangladesh.

“This will seriously worsen ethnic and religious tensions. We fully expect that the Muslim Rohingya in Rakhine state will be target number one of this legislation,” said HRW deputy Asia director Phil Robertson.

The legislation comes despite Myanmar facing mounting international pressure to stem the deluge of Muslim Rohingya – considered by the United Nations to be one of the world’s most persecuted minorities.

The exodus has surged since deadly sectarian violence in the state in 2012 pitted Rohingya against local Buddhists, with rights groups saying nationalists were using the spectre of a growing Muslim population to stoke tensions between communities.

Robertson said the new law defied “the calls for reconciliation and respect for rights in Rakhine” that neighbouring countries have said “is needed to prevent further boats full of desperate people setting out to sea”.

In an official report following the 2012 unrest, which left around 200 dead and displaced 140,000, a government commission said authorities should encourage family planning in Rohingya communities to limit population growth.

Myanmar has seen surging Buddhist nationalism in recent years and spates of violence targeting Muslim minorities have raised doubts over its much vaunted reforms after decades of harsh military rule.

Noble Peace Prize winning opposition leader Aung San Suu Kyi is yet to comment on the current migrant crisis, a silence observers attribute to fears over alienating voters in the Buddhist-majority nation ahead of elections slated for November.

On Sunday a lawmaker from Suu Kyi’s National League for Democracy (NLD) party told AFP that “no NLD MP voted in favour of this law” earlier in May.

“This law shouldn’t have been enacted We women are the ones who will suffer,” said May Win Myint, who is also a member of the NLD’s core executive committee.

A NLD spokesman said he could not confirm how the party voted.

Southeast Asia is currently battling an exodus of boat people fleeing persecution and poverty, with up to 2,000 vulnerable migrants thought to be stranded in the Bay of Bengal, many at the mercy of ruthless people smugglers.

Most are Muslim Rohingyas from Rakhine, but Bangladeshis trying to escape grinding poverty are also among the fleeing migrants. – Rappler.com