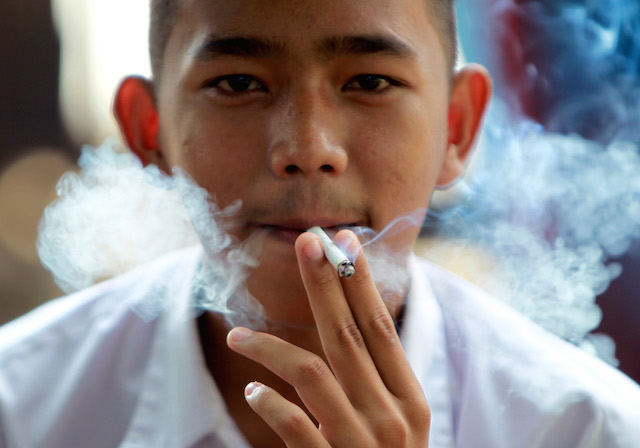 In 2010, a video of a smoking toddler in Indonesia went viral, showing the extent of unhealthy addiction to cigarettes that the country has.

Five years after the shocking video surfaced, Indonesia is still behind in tobacco control and seems to be regressing. Indonesia is the only country in the Asia Pacific that has yet to ratify the international Framework Convention on Tobacco Control (FCTC). The Indonesian parliament, intent on pushing tobacco industry interests, is deliberating a bill that will obstruct tobacco control efforts in Indonesia.

More than two-thirds of adult males are smokers in Indonesia. And nearly 4 million Indonesian children between the ages of 10 and 14 pick up smoking every year.

Indonesians smoke 300 billion cigarettes in a year. Only China and India exceed this number. A survey conducted in low-income populations showed that cigarettes comes second after the staple food rice on the list of household monthly consumption.

Indonesia has tried to set up regulations for tobacco control by introducing a Tobacco Control Bill in 2010, the year the toddler smoking video went viral, as priority legislation. Yet neither the parliament nor the government has discussed the bill to this day.

Instead, in February the parliament has included in this year’s list of priority bills new draft legislation on tobacco. This bill is completely different from the 2010 Tobacco Control Bill.

Based on the final version of the draft bill, health issues caused by smoking were not a main consideration.

The provisions are dominated by legal arrangements regarding tobacco production and the tobacco industry. Although it includes a minor provision on the protection of public health from the negative impacts of tobacco, the structure of this bill shows that health issues are not the core of the bill.

But Indonesia actually imports more tobacco than it exports to meet local demands for cigarettes. In 2011 Indonesia imported $507 million worth of tobacco and exported tobacco worth $146 million.

Indonesia does not need a dedicated bill for tobacco. Compared to other agricultural plants, tobacco plantations are not spread out in Indonesia’s 34 provinces. They are concentrated in only East and West Java, as well as West Nusa Tenggara.

Rice, in contrast, is evenly distributed throughout Java and other islands, with a total production of more than 70 million tonnes in 2013.

The Indonesian government should scrap the Tobacco Bill. The substance of the bill is not in line with the government’s efforts in protecting public health.

Indonesia has a 2009 Health Law that classifies tobacco as an addictive substance of which the production, distribution and use needs to be controlled. In 2012, Indonesia enacted a government regulation to control the health impact of tobacco products. This regulation, among other things, requires cigarette manufacturers to include pictorial health warnings on 40% of the space on every tobacco product’s packaging.

The government should accede to the FCTC and ratify it into national law.

If Indonesia continues to delay FCTC accession, the country will become a dumping ground for cigarette industries as more and more countries become parties to the FCTC. Even China, the world’s largest tobacco producer, has ratified the FCTC.

As Indonesia has rolled out its health-care system, in the long term the government will have to deal with the high health costs of smoking.

President Joko Widodo can improve his declining popularity by scrapping the tobacco bill and ratifying the FCTC. More importantly, this move will save future generations of Indonesians from the grip of tobacco industries. – Rappler.com

Rizky Argama is researcher at Indonesian Center for Law and Policy Studies (PSHK) and a lecturer at the Indonesia Jentera School of Law (IJSL). His research interests include constitutional law, parliamentary and legislative reform, elections, and freedom of associations.