‘Majority of 700 migrants on boat are Bangladeshi’ – Myanmar 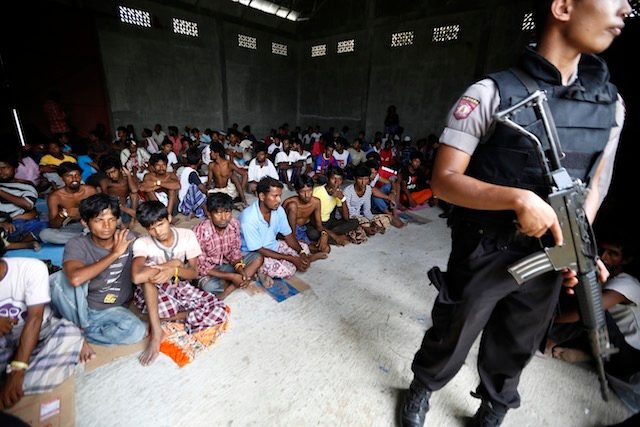 MAUNGDAW, Myanmar – Myanmar officials on Thursday, June 4, said most of the 700 migrants found adrift on a boat in its waters a week ago identified themselves as Bangladeshi, after they were driven to a camp near the border.

The migrants’ fate has been the subject of a diplomatic tussle between Myanmar and Bangladesh since they were found in the Bay of Bengal on May 29.

Neither country has shown willing to accept them despite a warning from the United States that it was watching the situation “very closely”.

The packed boat was intercepted last Friday heading south towards Malaysia, which along with Indonesia and Thailand has seen 3,500 people arrive in recent weeks in a migrant crisis that erupted after a crackdown on people-smuggling.

The exodus is made up of Rohingya Muslims fleeing persecution in Myanmar’s western Rakhine State and economic migrants from neighbouring Bangladesh.

The Rohingya are a pariah people in Myanmar with the majority denied citizenship, while Bangladesh’s Prime Minister Sheikh Hasina has accused desperate economic migrants from her country of being “mentally sick” and tarnishing the country’s reputation.

There were 733 passengers crammed on the boat, Myanmar immigration officer Saw Naing said after a count in Rakhine State on Thursday, adding “187 of them are from Myanmar and 546 from Bangladesh.”

Myanmar officials have said the group will be further assessed at the camp over the coming days.

Earlier, Foreign Affairs Minister Wunna Maung Lwin said that once verification of their nationalities was complete “we will co-ordinate with their country of origin to take them back.”

A convoy of the migrants, many bare-chested and devoid of any belongings, were driven around three hours from the Rakhine coastal town of Maungdaw to a remote camp close to the Bangladesh border on Thursdayafternoon.

The clutch of tents in scrubland is the latest stop in a gruelling — and dangerous — journey that has seen the migrants flee in an overcrowded boat, be set adrift at sea by people smugglers and then returned to the area they initially fled.

A group of weak-looking and thin men collected rain water in plastic bottles ahead of their journey, according to AFP reporters who joined the convoy.

Myanmar’s navy has found around 1,000 migrants in its waters in recent weeks and appears determined to edge them into Bangladesh, although officials there are resisting mass deportations across the frontier.

Apart from migrants who have reached land, the UN’s refugee agency estimates around 2,000 others are still trapped at sea, heaping pressure on both Myanmar and Bangladesh to take them back and improve living conditions to stem the outflow.

But the UN’s refugee arm has not had access to the 700 since last Friday.

On Wednesday US Assistant Secretary of State Anne Richard said Myanmar was “responsible for what happens to people” on the boat, warning her country is “following this very closely.”

Her comments came a few days after US President Barack Obama called on Myanmar to end “discrimination” against the Rohingya.

Most of Myanmar’s 1.3 million Rohingya have no citizenship, and are considered by the government to be illegal immigrants from Bangladesh.

Tens of thousands of Rohingya have fled since 2012 when deadly communal violence tore through Rakhine State.

The plight of the Muslim group has come under scrutiny as the migrant crisis has unfurled in Southeast Asia after a Thai crackdown on people-smuggling threw the multi-million dollar industry into disarray. – Rappler.com