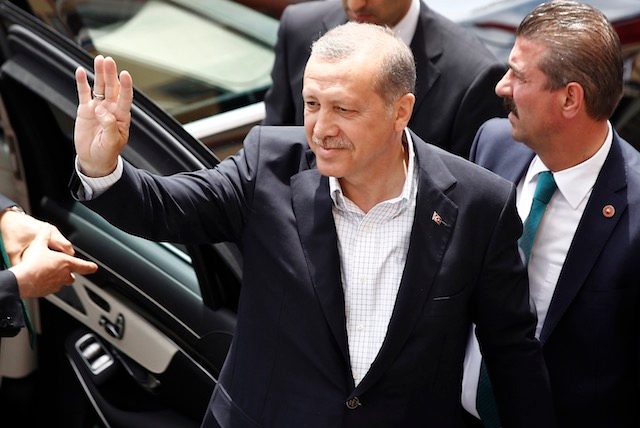 ISTANBUL / ANKARA, Turkey – Turkish President Recep Tayyip Erdogan was to deliver Thursday, June 11, his first speech since legislative elections, with his party set to talk to the opposition on forming a coalition after it lost its parliamentary majority in the polls.

The ruling Justice and Development Party (AKP), which unexpectedly fell short of a majority in Sunday’s (June 7) vote, has however said it will consider every option, including early elections, if the discussions fail.

“Only the AKP will lead the coalition talks but if others block the road we will think of every option,” Prime Minister Ahmet Davutoglu said in a live interview with state television, in a reference to possible new polls.

Davutoglu said he was prepared to meet with all of the 3 opposition parties who won seats in parliament, including the pro-Kurdish People’s Democratic Party (HDP).

“I will sincerely meet with every opposition party. We have no red lines,” he said.

“We always said a coalition is not the best option but if the people make such a choice, what falls on us is to make the best of it.”

The election results meant the AKP will have 258 seats in the hung 550-seat parliament, in what was seen as a major blow for the Islamic-rooted party which has ruled Turkey for the last 13 years.

The Republican People’s Party (CHP) will have 132 seats, and the Nationalist Movement Party (MHP) and the HDP 80 apiece.

Davutoglu said the AKP would carry out a survey to find out where it went wrong in the elections and also what kind of coalition its voters wanted, while stressing it was still “a success” that his party took the largest share of the ballots.

Markets had after the vote been rattled by the prospect of fresh elections but the possibility appears to have receded in recent days in favor of a coalition.

Erdogan had earlier held a surprise meeting with senior CHP politician Deniz Baykal, who said the Turkish strongman was open to a coalition government to stave off the threat of political turmoil.

The Turkish president had wanted the AKP to win a super majority to push through a new constitution that would give him reinforced powers as president but this plan has now been scuttled for the foreseeable future.

Erdogan – premier from 2003-2014 and president since August last year – held two hours of unannounced talks in Ankara with Baykal who was CHP leader until 2010 and retained his seat in the polls.

The meeting came amid speculation that one way out of Turkey’s political impasse could be a grand coalition between the CHP and AKP.

“I saw that Mr President has an open understanding for all kinds of coalitions,” the CHP grandee said afterwards, adding Erdogan wanted to see a coalition formed as soon as possible to prevent any political chaos.

“The political parties need to talk about the issue of a coalition. The presidency is not going to prevent a consensus,” he added.

Veteran politician Baykal, 76, who is poised to be the acting speaker as the oldest MP, said the meeting took place at Erdogan’s request.

The meeting also caused considerable ribaldry on social networks with users recalling how Erdogan had gleefully mocked Baykal when he resigned from the CHP post amid an alleged sex tape scandal.

The presidency issued only a still image of the meeting, with curiosity growing over Erdogan’s reluctance to talk in public and bloggers noting he had now been “off air” for over 72 hours.

However Erdogan is due on Thursday to give his first post-election speech at an event in Ankara.

The Erdogan-Baykal meeting, along with better than expected growth figures for the first quarter of 2.3%, compared to the same period a year earlier, supported stock markets and the lira which had been battered by fears of political chaos.

The BIST 100 Index in Istanbul rose over 2% while the lira gained 0.5% in value against the dollar. – Stuart Williams and Fulya Ozerkan, AFP / Rappler.com